Wendy Williams unveiled her Madame Tussauds wax figure on her daytime talk show and it’s SPOT ON! Check it out inside…

Listen, when it comes to Madame Tussauds museum capturing the likeness of celebs in their wax figures…they’re usually a HIT (Zendaya) or MISS (i.e. Beyonce, Nicki Minaj). Mostly misses. However, they finally nailed one.

After 20 artists put in over 800 hours to make the wax figure, Wendy Williams’ wax twin traveled over 3,000 miles across the Atlantic on a cargo ship to appear on Wendy’s NYC set.

It took the artists over 5 weeks to fix her hair where strands of human hair were inserted individually. The wax figure is rocking one of Wendy’s outfits from her closet (a Diane von Furstenberg jumpsuit & Gucci sneakers), her signature “W” necklace, and a Frank Muller watch set at 10AM – the time ther talk show stars.

Bringing Wendy to life via wax took long hours and tons of work.  The museum’s artists took 200 measurements and photographs from every angle to capture her likeness…even down to the spacing between her eyebrows. Wendy and Madama Tussauds have been working together for over a year to create an interactive experience for her fans at the Times Square destination.

Now, fans can get up close and personal for a chance to say “How You Doin’” with their fave daytime talk show host.

Peep her spot on figure below: 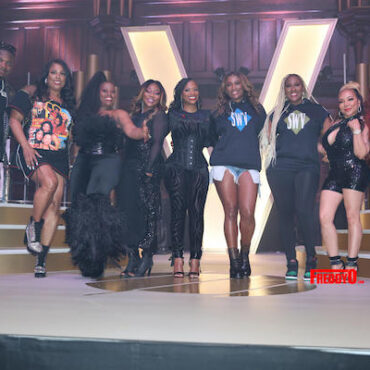 XSCAPE vs. SWV’s VERZUZ Recap: Why Coko Almost Didn’t Make It + Wendy Williams’ Ex-Husband All Up In The Mix