A judge gave Vanessa Bryant permission to release the names of the police officers who allegedly shared graphic pictures of Kobe & Gianna “Gigi” Bryant’s remains from the helicopter crash scene. One officer allegedly boasted about working on the investigation and shared photos of their remains at a bar!

Earlier this month, a federal judge ruled Kobe Bryant’s widow, Vanessa Bryant, can obtain the names of four Los Angeles County sheriff’s deputies who allegedly shared graphic photos of the remains of Kobe Bryant, his daughter Gianna Bryant, and seven others from the helicopter crash site on January 26, 2020.

Now, Vanessa Bryant can use the details from an internal affair investigation of the deputies for her lawsuit against the county and the Sheriff’s Department. By the way, the county can appeal the decision.

In 12 Instagram posts, Vanessa revealed excerpts from her lawsuit against the Los Angeles County Sheriff’s and Fire departments to her 14.4 million followers. In the documents, the names of the officers who allegedly shared the graphic photos of the helicopter crash scene where her husband, 13-year-old daughter, and seven others died.

In the paperwork, it’s revealed Vanessa spoke with Sheriff Alex Villanueva about the crash site being unprotected from photographers as she expressed her concern for privacy.  Sheriff Villanueva assured Vanessa that his deputies were securing the scene. However, it was the officers on the scene who decided to invade the privacy of the Bryant family. There was no governmental use reason for any officer on the scene to take personal pictures.

One officer took between 25 to 100 photos of the crash site on his personal cell phone, including pictures solely focused on the victims’ remains. The suit alleged most of the photos were quickly shared through text message (and the AirDrop feature on iPhones) to other deputies within the L.A. County Sheriff’s Department who had no connection to the investigation.

Officer Joey Cruz is accused of going to Baja California Bar and Grill two days after the crash where he “boasted that he had worked at the scene of the accident where Kobe Bryant had died.” He then proceeded to show the graphic pictures to bar patrons and the restaurant’s bartender. The bar’s security camera showed him “zooming in and out of the images while displaying them to the bartender. Shortly after seeing the photos, the bartender loudly boasted to restaurant employees and patrons that he had just seen a photo of Kobe Bryant’s body and described the image in graphic detail.”

Later that night, one of the patrons at the bar emailed a complaint to the Sheriff’s Department because he found the situation with the bartender bragging about seeing the gory photos “very disturbing.”

It’s alleged Rafael Mejia sent the photos to Joey Cruz – a trainee deputy – who then shared the photos with Michael Russell.

Officer Michael Russell is alleged to have saved the photos in an album on his personal cell phone and shared the photos with a friend who worked in a different police station, who had no involvement in the investigation. Officer Raul Versales is alleged to have saved and shared photos from his personal cell phone with individuals who had no purpose to view them.

The suit also alleged several of the officers named lied about having possession of and knowledge about the crash photos during the L.A. County Sheriff’s Department investigation.

You can read more about the lawsuit here.

This is one of the deputies named in the complaint alleging he took and distributed photos of the crash site. pic.twitter.com/MMD3qvz202

“We will refrain from trying this case in the media and will wait for the appropriate venue. Our hearts go out to all the families affected by this tragedy,” he tweeted.

Vanessa Byrant is seeking damages for negligence and invasion of privacy. We hope she hangs ALL of them out to dry because this totally uncalled for, intrusive, insentivie, and just plain disrespectful AF.

On a brighter note…

Natalia Bryant – Kobe & Vanessa’s eldest child – is kicking off her college career AND modeling career. The 18-year-old was recently accepted into Loyola Marymount University. Obviously, Vanessa is happy her daughter got accepted, but she joked about her choosing a school so far away from her.

“So glad you got accepted but too far… j/k,” captioned a photo of the campus shared on her IG Stories, tagging her daughter.

Luckily, she’s not TOO far. LMU is about an hour away from the Bryant home, which is outside of L.A.

“I have always been interested in fashion since a very young age. I have a love for the industry and ever since I can remember I wanted to model. There is a lot to learn but I feel this is a great opportunity for me to learn and express myself creatively,” Natalia said about the opportunity.

”My baby (with makeup) #grown @nataliabryant,” Vanessa captioned a photo of Natala. “Daddy would be so happy that you’re pursuing your modeling career now that you’re 18. You’re beautiful inside and out. Beautiful with makeup and without makeup. We love you.”

An all-time record for any Kobe Bryant card. pic.twitter.com/dTStDwavHx

A Kobe Bryant rookie card in “pristine condition” sold for nearly $1.8 million recently, becoming the most valuable basketball cards and the expensive KB card ever. According to Goldin Auctions, the auction house that facilitated the sale, the card is in near-perfect condition with top quality grades across the board.

It’s now reportedly the 10th most expensive card of all time. SHEESH! 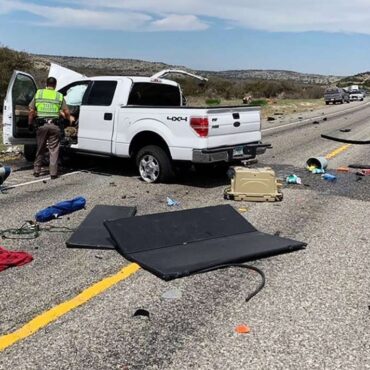 According to a criminal complaint filed Wednesday, a Texas man allegedly led authorities on a 50-mile pursuit near the southern border on Monday. What We Know: The driver was Sebastian Tovar, 24, of Austin, Texas. According to NBC, Tovar was initially driving north in a maroon truck near Del Rio when Texas Public Safety officers attempted to stop him for speeding. Instead, Tovar led DPS on a high-speed chase at […]