Tamika Smith – Method Man’s wife – had to get a few things off of her chest after Wendy Williams revealed she had a one-night stand with the Wu-Tang rapper back in the day. Read her rant inside…

Before the premiere of her LIFETIME biopic, Wendy Williams revealed she had a one-night stand with rapper-turned-actor Method Man back in the day. She said the bedroom magic happened back during her “coke days” when she was abusing drugs on a daily.

Apparently, Wendy & Meth linked up at a club and began smoking marijuana together. A fight broke out in the club, so they left and ended up back at Wendy’s penthouse in Jersey City. They continued to smoke, Wendy gave him a bubble bath in her jacuzzi tub and they got it in. Allegedly.

Now, Wendy spilled this tea last Friday, a day before her biopic was set to premiere. We’re not sure if Method Man’s wife watched the biopic or not, but she surely caught wind of the headlines about her husband’s one-night affair with the daytime talk show host. By the way, Wendy & Method Man’s hook up was BEFORE the Wu-Tang rapped got married to Tamika (in 2001).

In a statement posted to her Instagram Stories, Tamika said she was tired of keeping silent while “Wendy Williams launched constant verbal attacks against my husband, myself, and my family.” In the past, she ignored Wendy’s “lies, innuendos and blatant attempts to provoke” them, but she’s OVER being the “bigger person.”

Tamika talked about how she kept quiet when Wendy revealed to her listeners she had been diagnosed with cancer. At the time, Tamika only told a select few people about her diagnosis.

“When I was diagnosed with cancer years ago, Wendy shared my personal medical information with her listeners live on the sir during her radio broadcast. She didn’t care that she was violating my right to privacy, or that I hadn’t shared the news of my diagnosis with my family and friends yet. She never apologized, never expressed any regret whatsoever,” she said.

Now, we agree that she should be upset with the former radio host for sharing her personal information, but it makes you wonder – if Tamika only told a select amount of people, it’s very possible Method Man could have been the person who actually TOLD Wendy in the first place. Just sayin’…

Tamika said Wendy is OBSESSED with her family and suffers from “self-hate” and “low self-esteem.”

”Over the years those issues have made her increasingly ugly, both inside and out. And no amount of plastic surgery can fix the ugliness inside of her,” she said. “There’s no limit to how low she will go in the name of making headlines.”

Method Man’s wife said the reason she’s attacking her husband and marriage is due to the fact that Wendy’s career is on “life support” and her personal life is in shambles, so she’s clout chasing to remain relevant.

“How sad that a woman who was once revered in the entertainment industry has reduced herself to a tabloid sidenote and circus freak,” she said. “Wendy will forever be one of the most miserable b*tches on the planet.”

Tell us how you really feel.

Peep her full statement below:

Tamika wasn’t the only person to react to Wendy & her biopic:

A post shared by Eric B – Hip Hop Legend (@therealdjericb)

In the biopic, Wendy shared she was involved in a whirlwind situationship with rapper Eric B. – 1/2 of the rap group Eric B. & Rakim. Their romance took quite a few turbulent turns like when Eric B ruined her credit score, stole her rental car, and allegedly got her pregnancy. In the movie, Wendy underwent an abortion after she found out she was pregnant with his baby.

The NYC rapper hopped on Instagram to react, sharing a throwback picture of himself standing next to a car with his name on the license plate.

“To hilarious I laughed to well it made for great Tv But the truth is something different Try that !!!!!!!,” he wrote.

Me taking notes. Remind me to never make my future husband my legal guardian or power of attorney. #WendyWilliamsMovie #WendyWilliams pic.twitter.com/sk1mXRmCFe

Did you watch?! If so, did you learn anything new about Wendy Williams that you didn’t already know? Tell us your favorite scene! 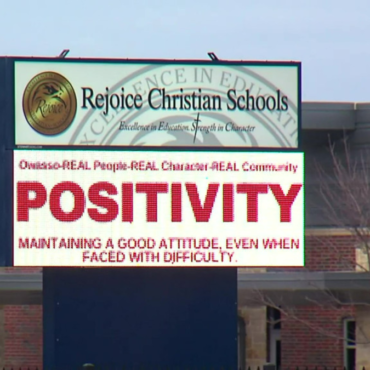 Mother Says 2nd-Grader Expelled for Crush on Another Girl

An 8-year-old girl has been expelled from her school in Oklahoma after telling another girl that she had a crush on her. What We Know: Delanie Shelton’s daughter, Chloe, up until recently, was a 2nd-grade student at Rejoice Christian School in Owasso, Oklahoma. Last week on the playground, Chloe admitted her crush on another female student. Without hesitation, the school pulled Chloe from the playground and into the principal’s office, […]