Meek Mill is seemingly defending the Kobe Bryant metaphor he used in a new leaked snippet of a track featuring Lil Baby. Find out what he said and see how the Internet dragged him for it inside…

Meek Mill has been heavy in the headlines lately for foolywang material.

The Internet has been dragging Meek Mill after a track featuring Lil Baby leaked online. In the song, the Philly rapper used a metaphor which seemingly references the helicopter crash that took the life of NBA icon Kobe Bryant, his 13-year-old daughter Gianna Bryant, and seven other people.

On the song, he raps:

“Yeah, and if I ever lack, I’m goin’ out with my chopper, it be another Kobe.”

Fans are upset that a preview of a snippet featuring Meek Mill and Lil Baby shows Meek saying a disrespectful bar about Kobe pic.twitter.com/FvqKZhwrFc

While we don’t think he intentionally meant to disrespect Kobe, the lyric was bad form and inappropriate.

Peep a few tweets from heated fans below:

“I’m going out with my chopper, it be another Kobe” – Meek Mill pic.twitter.com/VfzoFIRVo6

Kobe dropping down from heaven to slap the shit outta Meek Mill for his line in that verse pic.twitter.com/pUwGsT7V7p

Lil baby after hearing what this mf Meek mill said about Kobe: pic.twitter.com/x2eOAjMgaN

I don’t know when I’ll be ready to hear a song that references Kobe, but I know it ain’t now & I know that line Meek Mill just dropped ain’t it. Let that man RIP a little longer & the next man who wants to try, work a little harder to ensure that your bar isn’t so disrespectful.

After he started trending on Twitter, Meek seemingly shared some tweets in his own defense.

“somebody promo a narrative and y’all follow it…. y’all internet antics cannot stop me ….sh*t like zombie land or something! Lol.” He continued, “They paying to influence y’all now … its almost like mind control ‘wake up’.”

The Twitter account that originally posted the Meek/Lil Baby snippet was suspended, which means Meek or his label likely had it removed. However, snippets of the song are still circulating online.

The music controversy comes on the heels of the CHAMPIONSHIPS rapper running into rapper Tekashi 6ix9ine outside of a club in Atlanta on Valentine’s Day. In video clips from the altercation, you see both rappers yelling and screaming at each other as they try to break past security to get to one another.

The headline should be: he waited outside a restaurant and popped up with the cops recording with his phone out! He tried to line me up to go to jail! https://t.co/gWAK3AEnbG

Right after the incident went down, both Meek & Tekashi shared the videos they recorded when they ran into each other on their IG accounts, but they ended up deleting them. Of course, they didn’t go anywhere because the clips were saved.

Meek said 69 waited on him after the club to try and get him locked back up:

We did not run into eachother I was getting in my car he just popped out ….we almost was smoking on that 69 pack for the love of a viral moment ….. he tryna get something locked up no cap lol

“69 waited out side the club for me they tryna get usssssss wtf,” he tweeted. “We did not run into eachother I was getting in my car he just popped out ….we almost was smoking on that 69 pack for the love of a viral moment ….. he tryna get something locked up no cap lol,” he continued.

Why did he pick meeeee wtf lol

Then he said a Pooh shiesty bar to me wtf

“Why did he pick meeeee wtf lol,” Meek said. “Then he said a Pooh shiesty bar to me wtf”

After his run-in with Tekashi, Wack 100 – rapper The Game’s longtime manager – hopped on social media to troll Meek for not “handling” a “rat” (in reference to Tekashi considered to be a snitch in the street world):

Meek hopped in Wack’s comments and suggested he pull up on him since he’s so concerned:

Wack shared another post, telling Meek to “beef” with the “rat” and not him:

He also addressed the dust up in a video, saying Meek took an “L” and that he needs to stop addressing 6ix9ine if he scared to go back to jail:

And Wack 100 is still applying pressure to Meek. After his Kobe Lyric controversy, Wack shared a picture of Kobe & Gianna with the caption:

“Some metaphors SHOULD not be used .. Pretenders struggle to pretend when it’s not authentic — 1 man don’t speak for #Philli -Rip #Kobe&GIGI”

He has a point there. Thoughts? 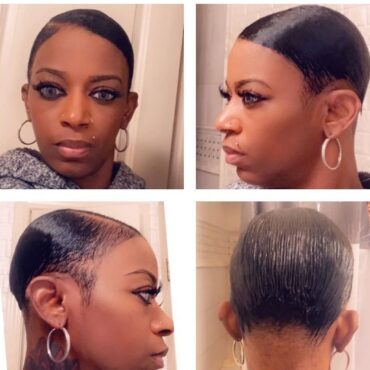 Tessica Brown – the woman dubbed “Gorilla Glue Girl” – shows off her new cropped coif after her Gorilla Glue hair fiasco. But now, there's more drama as her GoFundMe account has been FROZEN after the company received tips that she has been trying to make a come up. Tessica has sent a cease-and-desist letter to a blogger who says that she's clout chasing. More inside… UPDATE: The GoFundMe money […]