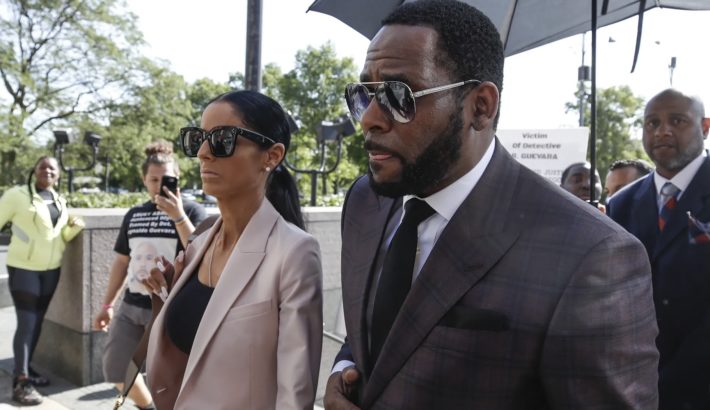 The case against R. Kelly has been a wild ride as witnesses take to the stand and share their stories. The latest to speak about her alleged experiences with R. Kelly is Cheryl Mack, a woman who once served as Kelly’s assistant. Mack is the mother of producer London On Da Track, and she claimed that at a concert, she witnessed a woman begin to massage the disgraced singer.

“He said, ‘Generally in these situations, people come up missing,” Mack told the jury. Mack, who is also the mother of hip hop producer London on da Track, testified that her working relationship with Kelly began in 2005. By 2009, she was managing a 17-year-old Atlanta singer, identified in court as Precious. Mack claimed Kelly was interested in making music with Precious, who was also from Atlanta. At some point, Precious started living in a hotel near Kelly’s Chicago home and recording in his studio.

Mack said the partnership between Kelly and Precious ended “abruptly” and Kelly demanded that she come to Chicago because her client threatened to sue him for sexual harassment. Upon arriving in Chicago, Kellz’ manager and lawyer rushed Mack into signing an affidavit. During her tearful testimony, Mack couldn’t remember if she even read the document or answered the pre-written questions. However, she recalled seeing questions about whether Kelly had sexual contact with Precious or gave her alcohol. Mack said she found out later that her client’s sexual harassment lawsuit had been “resolved.”

Nearly four years after the incident with Precious, Mack reportedly told jurors she reconnected with Kelly in 2013. Music executive Devyne Stephens believed between Mack and herself, the two could help reinvigorate Kelly’s career. “They hit it off, and we went to work,” Mack said. At some point, Kelly went from her client to her boss as she became Kelly’s executive assistant.

Similar to several previous accounts in the trial, Mack stated she witnessed Kelly engaging in disturbing behavior several times and even saw firsthand the mental chokehold he had on countless young women. She reaffirmed claims Kelly was often accompanied by several “female guests,” who were handled with strict rules. And she mentioned that at Kelly’s basketball games, the women he was involved with would sit facing a wall, so they didn’t make any eye contact with other men.

In between tears, she spoke about not being paid by the Pied Piper of R&B for months and having to write an apology letter because she booked a show he wasn’t pleased with. The nightmare for Mack ended in 2015. After a show, Mack said she witnessed one of the women, who has accused Kelly of sexual abuse, massage her ex-boss’s legs in a hotel room. Mack said she took that as her “cue to leave.” “I was very uncomfortable,” she said. “That wasn’t my business, I was there to work.” Mack quit the next day after a dispute inside of a McDonalds. The alleged predator accused her of “spoiling” the surprise birthday gift for his stylist.

In court drawings, Mack can be seen clutching tissues and crying. During her testimony, she stated she did not want to be in court. However, she was subpoenaed by prosecutors to appear. Kelly is accused of several crimes including: sexual exploitation of a child, kidnapping, bribery, forced labor and sexual trafficking across state lines. Kelly has pleaded not guilty to all charges.

At what point does the judge just say guilty and end the trial.

The search for the now-missing fiancé of 22-year-old Gabby Petito is focused on a Florida nature reserve, where 50 officers from five local agencies and FBI agents scoured the area Saturday. via: Complex “All of Gabby’s family want the world to know that Brian is not missing, he is hiding,” the family said in a statement to CNN on Friday. “Gabby is missing.” It is believed that 22-year-old Petito was […]