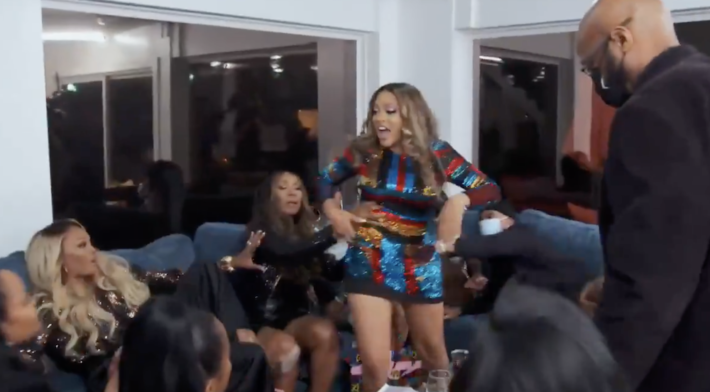 ‘The Real Housewives of Atlanta’ ended Season 13 with a not-so-merry Christmas gathering at Lake Bailey — and things nearly got physical between Drew Sidora and LaToya Ali.

On Sunday night’s finale, the Step Up actress and the Canadian YouTuber got into a near-physical brawl after Drew once again accused LaToya of having a relationship with Prophet Anthony Lott. (Both Prophet Lott, who is single, and LaToya, who is in the process of getting a divorce, denied Drew’s accusation during last week’s episode.)

The confrontation took place at Cynthia Bailey’s white elephant “Friendsmas” holiday party at her Lake Bailey home, where each Housewife and Friend of the Housewives was asked to bring a gift not exceeding $1,000 in value.

Ahead of the party, LaToya, 34, texted Cynthia last-minute and said she wouldn’t be attending due to the ongoing drama. “I just got a text from LaToya saying, ‘I’m not coming. I don’t want the drama. I’m over it,’” Cynthia read aloud.

Fast-forward to the gathering, the ladies ate dinner together and then moved to the couch to play the game. After each woman opened a present — among them were Tiffany’s jewelry, Baccarat perfume, a mini Gucci bag and $1,000 cash — Kenya Moore opened the last gift, which was Drew’s trio of boxes.

Unlike the other lavish items, Kenya unwrapped three packages, which contained a tape recording, a $100 donation to the Humane Society and Drew’s infamous wig.

“This is actually the hair that Kenya was obsessed with, and LaToya,” Drew, 35, told the group, holding up the wig that LaToya previously criticized.

The time then came for the tape recording to be played, which was allegedly of Prophet Lott speaking with Drew’s assistant, Danny, about LaToya.

“So, everybody’s been talking about this whole prophet situation and literally God dropped this in my lap. My assistant Danny gave it to me. Danny was really hurt that Prophet Lott was not telling the truth and this was a conversation that they had,” Drew told the group. “I just want y’all to sit back and listen, because I do not lie.”

On the recording, Danny allegedly asked Prophet Lott: “What is the relationship with Toya?”

“Do I like her? I really do like her,” Prophet Lott allegedly responded. “She’s an awesome person. But I know the situation ’cause I’ve been there. I met my 3-year-old’s mom while I was still technically married.”

Drew then told the group, “He admits to liking LaToya, and he admits that when he was married, he started to date his baby’s mother.”

Seemingly coming to LaToya and Prophet Lott’s defense, Kandi Burruss said to Drew, “Do you understand why he’s saying that? He’s saying that he likes LaToya and that he understands the fact that she’s married and she’s moving on because he’s been married before and he moved on.”

The doorbell then rang and in walked LaToya, who appeared to give a hug to everyone but Drew.

Kenya, 50, proceeded to tell LaToya that prior to her arrival, Drew “just tried to present some stupid recording of a prophet talking about you.”

But Drew stood by what she believed to be true. “The truth will go forth. LaToya has issues and things going on, and we have had a lot of drama that she has brought into my life,” she said to the women.

LaToya didn’t want to hear it, though. “Drew, shut up,” she snapped at Drew, who replied by telling her castmate, “Something is wrong with you.”

LaToya fired back, “And your man looking for some new p—-, ’cause yours is dried up.”

The situation escalated as the women stood up, firing off insults and speaking over each other. Finally, LaToya walked away and left the party with Kenya. But it wasn’t long before she was back, having forgotten her bag inside. Returning to the gathering, LaToya exclaimed, “I’m going to go meet up with the prophet!”

“I’m not with the prophet,” LaToya told Drew. “But he did bless my house today.”

LaToya then grabbed the wig Drew had brought as a gift and threw it at her costar. Immediately, Drew jumped up off the couch and started moving towards LaToya before two men, who appeared to be members of production, intervened.

At that, the party was over.

“You will not put hands on me and you will not throw things at me,” Drew said in a confessional. “She is an animal and she needs to be tamed.”

Check out the moment below. Part one of the three-part ‘Real Housewives of Atlanta’ season 13 reunion begins Sunday at 8 p.m. ET on Bravo. 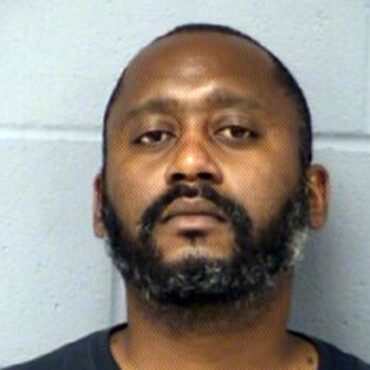 3 Dead After Shooting in Texas, Suspect Was Former Police Detective

A former police detective who is believed to have killed three people on Sunday afternoon in Austin, Texas is still on the loose as of late Sunday night. Authorities are worried what his next move might be. via NYDN: Police and fire department officials had responded to calls in the Arboretum area of northwest Austin shortly before noon, according to Austin-Travis County EMS. Three adult victims, two Hispanic women and […]