Larsa Pippen is still defending her choice to date married NBA player Malik Beasley. Oh, and she’s also talking about the Kardashian Klan again, reminding them to lay low when it comes to speaking on her name. More inside…

One thing about Larsa Pippen (top left, above), she knows how to stir up drama and get her name in the headlines.

The 46-year-old former “Real Housewives of Miami” star (who’s divorce from Scottie Pippen hasn’t been finalized just yet) had everyone talking after flicks of her and 24-year-old NBA baller Malik Beasley all cuddled up while shopping it up at a mall in Miami on November 23rd surfaced.

Turns out, news of the Minnesota Timberwolves player having a “dating life” outside of his marriage was news to his 23-year-old wife/son’s mother Montana Yao. She revealed she was blindsided when pictures of her husband with another woman (who looks almost identical to herself) hit the Internet.

Trying to clean up her image, Larsa tweeted Malik was separated from Montana when they started talking, but Montana quickly shut that ish down:

”Malik and his ex were separated before I ever met him that’s a fact,” Larsa tweeted.

”This is 100% false. Continue to speak on my name and my relationship and we’re going to have issues,” Montana responded to Larsa. “Receipts don’t lie. Let’s not go there. I think you’ve embarrassed yourself enough already,” she continued.

You would think after that Twitter exchange Larsa would shut up, but nope. She’s STILL talking and she’s still defending dating a married man.

“We had spoken about it. It wasn’t a secret. I know a lot of people that are married and exiting,” Larsa said about Malik’s separation from Montana during an interview on Hollywood Unlocked. “I’ve played that part. So for me, if you’re not being shady and you’re telling me all your stuff, I’m going to believe you.”

The former reality star insisted Malik and his wife were already separated before things got romantic between them. How did she know? She claims she “googled” them.

“A lot of people are not happy in their situations and they don’t want to jump ship until they see someone they like. You don’t want to just shake your kids up because you might never meet someone that you actually like. You’re in a state of living in the same place, but not really together,” she said.

“I Googled them when I first met him — they weren’t together. They had issues before. It had nothing to do with me, so I wasn’t thinking anything about it. If you spent a minute Googling their situation, it wasn’t the ideal situation way before me.”

Larsa also touched on her “not-se serious” rebound relationship with rapper Future. Peep a clip below:

During the interview, Larsa also spoke about her failed relationship with her former bestie Kim Kardashian and the Kardashian Klan. She claims she doesn’t feel “betrayed,” but confirmed they had a “falling out” that caused friction between them.

“I love them, that’s the thing. We had an issue, or issues, or whatever. We had a falling out… but I’m not gonna be petty or immature. I don’t know if you call it ‘betrayed.’ Things happened… and our relationship had gotten to a place that was just a weird, ugly place. I never thought it would happen,” she said.

Larsa said she doesn’t like talking about “other people’s stories,” however if they come for her – it’s ON.

“If they come for me then like karma’s a b*tch. I don’t even want to talk about them,” she said.

For now, the bodies will remain buried…unless they pop off.

Larsa also touched on the Jordyn Woods vs. Tristan Thompson (whom Larsa dated before he got with Khloe Kardashian) situation. You’ll recall, Larsa tried to drag Jordyn amid the controversy, but the Kardashian Klan remained quiet. Now, Larsa has changed her tune about Jordy.

Hmph. Funny how the tables have turned.

Also, Larsa addressed if she thought Kim’s estranged husband Kanye West liked her, she revealed he would confide in her during early morning phone calls, and she also addressed rumors that she tried to seduce Kylie Jenner‘s daughter’s dad, Travis Scott.

“Some people value men over friends, you know?,” she said in response to the Kardashian Klan not believing her when she said she did NOT try to seduce Travis.

You can watch the full interview below:

Speaking of marriage, Larsa herself is still married even though she and Scottie filed for divorce twice during their marriage. It was Scottie who filed for divorce in 2016 first, but the couple later reconciled. The second time was in 2018 when both individuals decided to end their marriage after almost 21 years of being together. It has yet to be finalized. The couple has four children together, including Scotty Jr. (20), Preston (18), Justin (18), and Sophia (12). 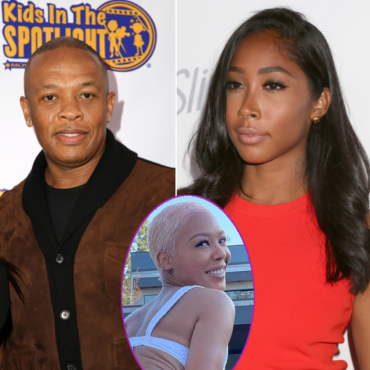 [UPDATE] Moniece Slaughter Claims Apryl Jones Has Been Dating Dr. Dre ‘For A While,’ Says Dre Threatened Moniece & She Calls Him A ‘Woman Beater’

Moniece Slaughter spills some tea and claims her former “Love & Hip Hop: Hollywood” co-star Apryl Jones has been dating Dr. Dre for while after pictures of the twosome having dinner surface online. After sharing that info, Moniece claims she has been receiving threatening phone calls and she believes Dre is behind it. More inside… [UPDATE]: It appears Moniece Slaughter has been forced to take a "social media break" after […]