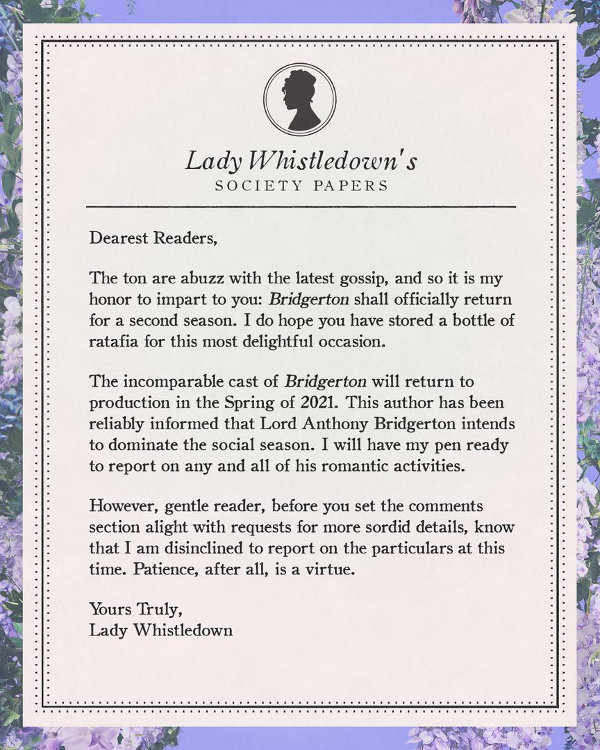 Netflix’s “Bridgerton” has been renewed for Season 2. Yep, Lady Whistledown confirmed the rumors. More inside…

Dearest readers! You’ll be happy to know another season of “Bridgerton” is officially on the way!

Bomb television producer Shonda Rhimes has another HIT on her hands. Netflix just announced plans for the upcoming 2nd season of the hit series about esteemed families of British high society and their romantic pursuits. The show is a TV adaptation of Julia Quinn’s popular books.

And what better way to deliver the news than via Lady Whistledown’s Society Papers gossip sheet.

“The ton are abuzz with the latest gossip, and so it is my honor to impart to you: Bridgerton shall officially return for a second season. I do hope you have stored a bottle of ratafia for this most delightful occasion,” Lady Whistledown wrote in the gossip sheet – just like in the series.

Prepare for another social season! @Bridgerton shall be back for Season 2! pic.twitter.com/cYbgIhPUbC

Production for Season 2 will begin this Spring in the UK!

“The incomparable cast of Bridgerton will return to production in the Spring of 2021. This author has been reliably informed that Lord Anthony Bridgerton intends to dominate the social season. I will have my pen ready to report on any and all of his romantic activities,” she continued.

“However, gentle reader, before you set the comments section alight with requests for more sordid details, know that I am disinclined to report on the particulars at this time. Patience, after all, is a virtue.”

Casting is underway for the new season since lots of new characters will be included in the upcoming series.

“We have a bunch of new characters we are going to be introducing,” creator Chris Van Dusen said announcing the renewal on “Today with Hoda & Jenna.” “Anthony is going to have a love interest next season, and I think it’s going to be as sweeping and moving and as beautiful as viewers of the first season have come to expect from the show.”

BREAKING: @bridgerton creator Chris Van Dusen is live on @HodaAndJenna right now and just broke the news that SEASON TWO begins filming in London this spring! He said this next season will focus on eldest brother Anthony Bridgerton!! YESSS!!!! Come through Viscount!

Season 1 centered around the eldest Bridgerton daughter, Daphne (played by Phoebe Dynevor), and her entanglement with the Duke of Hastings Simon Bassett (played by British hottie Regé-Jean Page). The first season was based on Quinn’s first book in the series, “The Duke and I.”

All together, the book series consists of eight novels. Each book chronicles the love life of one of the Bridgerton siblings.

News of a renewal wasn’t too much a surprise since the show became an instant success. Earlier this month, Netflix revealed over 63 million households watched the series in the first four weeks. It was released Christmas Day. With those numbers, “Bridgerton” became one of Netflix’s biggest original series launches…ever.

what a delightful morning pic.twitter.com/TpkRIMQmGJ

“The ton are abuzz!” IYKYK.