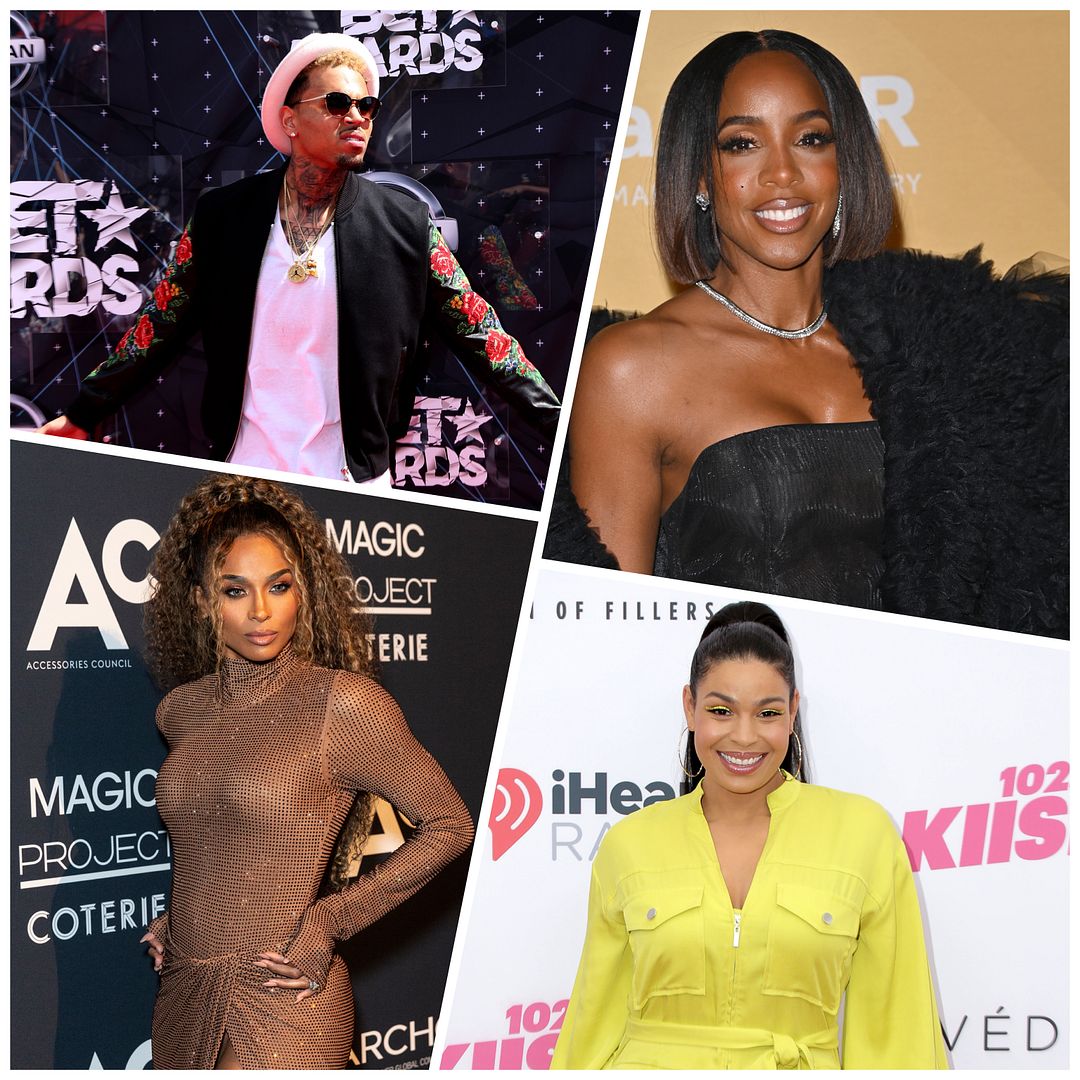 Chris Brown is receiving support from several celebs, including Kelly Rowland, Ciara, and Jordin Sparks, after the American Music Awards unexpectedly canceled his scheduled Michael Jackson tribute. Days after the awards show, Kelly doubled down on defending the R&B crooner. Meanwhile, CB critics are reminding people that the singer didn’t just abuse Rihanna. His ex-girlfriend, Karrueche, filed a restraining order against him years ago due to alleged abuse. More inside…

The Grammy winner was scheduled to perform a tribute in honor of the 40th anniversary of Michael Jackson’s classic track, “Thriller,” at the 2022 American Music Awards on Sunday (Nov. 20th). However, news about the performance cancellation made headlines days before the awards show.

During the show, Kelly Rowland presented the Favorite Male R&B Artist award to Breezy, who was not present. After his name was announced, some audience members started to “boo,” which prompted Kelly to sternly check them.

“Chris Brown is not here tonight, so I am accepting this award on his behalf …excuse me! Chill out,” she said to those who were booing. “I want to tell Chris thank you so much for making great R&B music and I want to tell him thank you for being an incredible performer,” she said. “I’ll take this award, bring it to you. I love you. Congratulations.”

TMZ photogs caught up with the former Destiny’s Child member, where she doubled down on defending Breezy.

“You know what? I believe that grace is very real, and we all need a dose of it,” she said. “And before we point fingers at anybody, we should realize how grateful we are for every moment that we get, for even our own things that we have. I just think it’s important to remember to be human. We are humans.”

Watch the clip above.

The AMAs’ production company, Dick Clark Productions, issued a statement to Entertainment Tonight explaining why they chose to scrap the R&B singer’s tribute act. The decision to cancel the performance was, according to the producers, a creative direction choice that had nothing to do with Chris directly.

“Live shows change all the time, it’s the nature of this business; unfortunately, this element of the AMAs didn’t come together as we couldn’t align on the performance, to no fault of Chris Brown,” the statement read.

According to reports, Breezy would have launched the tribute with his own single, “Under the Influence,” before transitioning into his Michael Jackson tribute. After Breezy learned his performance had been canceled, he took to Instagram, sharing a video from his rehearsals:

”U SERIOUS?,” he wrote with the facepalm emoji.

”I know you already know this but, I LOVE YOU CHRIS!! PERIOD,” Kelly Rowland wrote in his comments section under the video.

Days later, fans found out Ciara was tapped to perform alongside Chris. The singer/dancer shared a video of her and Chris practicing their Thriller tribute in the same rehearsal space.

“MJ thank you for the inspiration you’ve given us all! Thriller 40th Anniversary,” she said. “@ChrisBrownOfficial you’re a rare breed of this generation. Always fun to rock with you,” she captioned the video.

TMZ photogs caught up with singer Jordin Sparks and asked her about the AMAs canceling Chris Brown’s performance.

“We love Chris. He should have been there,” the “American Idol” Season 6 winner said yesterday (Nov. 22nd). “People deserve to be able to grow and learn and be able to live their life without things hanging over them. Everybody deserves that … him especially.”

Jordin, who collaborated with Chris in 2008 on “No Air,” said she felt the AMAs should not have canceled his tribute.

“They just shouldn’t have canceled the performance. That’s how I feel about it,” she said.

Watch the full clip above.

Since the AMAs drama popped off, there have been debates about forgiving Chris Brown due to his abusive past. Some people feel like the world should get over Breezy assaulting his ex-girlfriend Rihanna in 2009 because she, herself, has already forgiven him. However, many people feel like he shouldn’t be forgiven because Rihanna isn’t the only person he has abused.

In 2017, Chris Brown’s ex-girlfriend, Karrueche Tran, won a 5-year restraining order against Breezy. A Santa Monica judge granted the “Claws” actress’ request after she alleged he punched her in the stomach twice, pushed her down a flight of stairs, and threatened the lives of her, her family, and her friends.

People took to Twitter to remind Chris Brown supporters why they shouldn’t defend him:

Kelly Rowland, a dark skinned back woman is defending Chris Brown who abused Rihanna and Karrueche Tran, who has a life long restraining order against him. It doesn’t get lower than this. I was rooting for you Kelly he wouldn’t even let you in club.

karrueche’s restraining order against chris brown expired this year btw, he punched her and dragged her down a stairwell, beat her multiple times and told her to not be in public where he would see her b/c he was going to kill her but yeah sure https://t.co/mJzvKGJGck

Rihanna is not the only woman Chris Brown has assaulted and harassed. Karrueche Tran filed a 5 year restraining order from him in 2017. It was granted and she is currently going to court to make permanent. Another woman, Cassandra, also filed one stating he stalked and hit her. pic.twitter.com/yXCr3ywIRX

What I can’t stand about the Kelly Rowlands of the world is how they 1) try to downplay abuse as just some mistake 2) act like Chris Brown hasn’t had issues since the Rihanna incident. Karrueche needed to file a restraining order because of his behavior https://t.co/ZQoYEr73OD

Rihanna isn’t the only woman Chris Brown has beat up. Karrueche had a restraining order against him. Do u know how hard it is for a black woman to get those? It’s not “just one incident over 10 years ago”. The “incident” y’all brush off put Rihanna’s life in danger. STOP.

You need to google the timeline of Chris brown legal troubles. That man has been violent for years. He threatened to kill Karrueche so she was granted a 5 yr restraining order. Y’all be so quick to act like the Rihanna incident was all he ever did.

Should Chris Brown be forgiven for his abusive past? Share your thoughts!

ALL AMERICAN: A LOOK AT YBF CELEBS STEP OUT FOR THE 2022 AMAS! 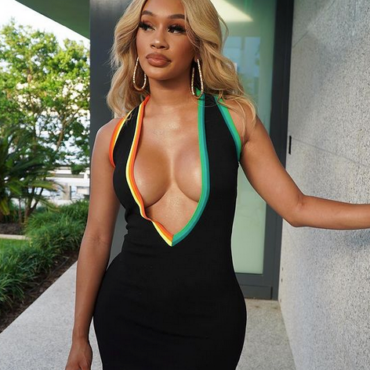 Saweetie seems shocked by “misogyny in Hip Hop” after Joe Budden said she needs to “shut the f*** up” for “starting” drama with her ex-boyfriend, Quavo, as he mourns the death of his nephew, Takeoff. Deets inside…   We’re not sure where Saweetie has been, but she’s seemingly shocked at the magnitude of misogyny in Hip Hop after Joe Budden had some things to say about her. The rapper-turned-podcaster said […]