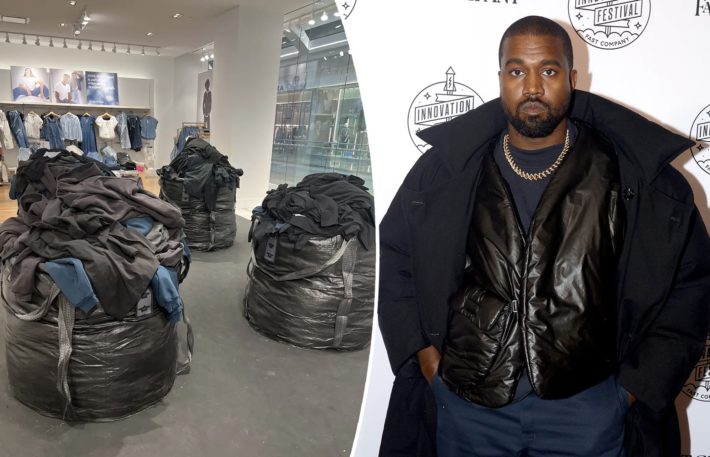 Kanye West’s fans have more than just their panties in a bunch.

Kanye West always has an unconventional approach to his creative endeavors. This time, however, his decision to sell his new Yeezy Gap collection in trash bags doesn’t sit well with critics.

The 45-year-old rapper/fashion designer allegedly requested that the clothing be sold in trash bags instead of on the racks of the popular store, according to one Twitter user, @owen__lang, who posted a photo of the multiple stuffed bags on the floor of one Gap store. The user also stated that one of the employees said the hip-hop star got “mad” when they initially sold them on hangers like their other clothes.

“This is how they are selling Yeezy GAP. The sales associate said Ye got mad when he saw they had it on hangers and this is how he wanted it,” read the tweet posted on Tuesday, August 16. They won’t help you find ur size too, you just have to just dig through everything.”

Before the display made headlines, Ye took to Instagram to seemingly reveal that the campaign was inspired by the homeless. “Look to the children. Look to the homeless. As the biggest inspiration for all design,” he captioned his August 12 post.

However, that didn’t stop fans and critics from sharing some backlash and jokes. “Kanye got people thrifting at Gap,” one Twitter user reacted. “Workin at Yeezy Gap is gonna be Hell,” another shared.

A third wrote, “Saw this s**t at Gap in Houston. As a former visuals manager I can say this would make me quit my job if I were still on the visuals team,” and a fourth mentioned that “Kanye literally worked at The Gap. He knows what he’s doing to those employees.”

Someone else mentioned a song on which Ye brings up “hating” working at Gap. “Kanye has a whole song about how much he hated working at the Gap. Why would he make Gap employees’ lives harder?” the user asked, “Whole store is about to look like laundry baskets threw up. They’re gonna have one cashier and everybody else doing recovery.”

The song the user was most likely referring to was 2004’s “Spaceship”, on which Ye raps, “Let’s go back, back to the Gap, Look at my check, wasn’t no scratch…”

In 2015, Ye further opened up about the customer service job. He revealed he was only 15 years old and it was one of his first job experiences. “When I was working at the Gap at 15, I don’t think I had any desire to actually make clothes, but I always felt like that’s what I wanted to be around. I loved the fabrics, I loved the colors, I loved the proportions,” he explained to Paper Magazine. “Abercrombie was too expensive for me and the Gap was too expensive for me.”

Cloe Reynicke, a North Carolina woman who allegedly drugged and robbed a man of more than $50,000 in personal belongings, has been arrested and charged. via: Complex Cloe Reynicke, 23, was arrested Monday in Henderson, Nevada after she was pulled over for driving with a suspended license. She was charged with one count of grand theft for the June 10 incident in Florida. The victim, Bobby Scali, told NBC Miami […]