K. Michelle went viral this week when a video of her dancing when viral. Daytime talk show host Wendy Williams brought it up during her show and alleged K’s butt injections “leaked” on Idris Elba’s bed sheets. What could have turned into a public feud was shut down by the singer. More inside….

K. Michelle no longer has any interest in feuding with another Black woman.

This week, singer K. Michelle found herself trending on social media after a clip of from her IG Live started circulating. In the viral clip, something weird happens with K’s butt area while she was dancing it, causing folks to crack jokes that her “butt busted” on camera. Their words, not ours.

Over the last few years, the soon-to-be Country singer has been very vocal and transparent about her plastic surgery journey where she has endured several surgeries in order to remove the silicone from her butt injections.

During her Hot Topics segment, Wendy Williams brought up “butt-gate” and alleged K’s butt injections leaked on Idris Elba’s sheets back when they were rumored to be dating.

“Because I guess it took a little while for them to squish down and she said, ‘Oh my gosh, what is this on my underwear? What is this gooey’—I don’t know that’s what she said but I can only imagine the tragedy of the situation,” Wendy said on the show. “Leaving silicone on Idris Elba’s sheets. I love that story, that they were romantical at one point.”

The former “Love & Hip Hop” star got wind of Wendy’s comments and addressed the drama on her Instagram account. Instead of clapping back at Wendy, she decided to spare her and take the high road.

The “Can’t Raise A Man” singer said she’s a changed woman and that she’s now using her platform to help other women who are struggling through the same health issues as herself. She said she has a surgery coming up, which is hopefully her last, to finish the reconstruction on her butt.

“If your going to report the story report the whole thing blogs. She also said this. You needed a story that bad huh? You couldn’t post this part the positive side,” K said in reference to a clip of Wendy praising her.

Now, we’re not all the way convinced Wendy wasn’t being shady here, but K seems to think it was something positive, so we’ll go with that.

“I will not be going off on another black woman I no longer get paid to do that. She cracked her jokes like much of you and said what she said,” K continued. “I’m on my journey. Media I know you have to do your job, but people are dying just don’t make it so hard. See you soon Wendy,” she concluded. 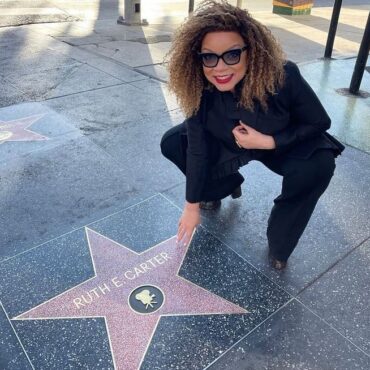 Oscar Winner Ruth E. Carter Makes History As The 1st Black Costume Designer To Receive A Star On The Hollywood Walk of Fame