A snippet from “Joseline’s Cabaret” went viral before the Season 2 premiere. And no one can get over the “double homicide” comment made in the sneak peek. Find out what we mean, plus what the show’s creator, Joseline Hernandez, has to say about it inside…

Leave it to reality queen Joseline Hernadez to have the Internet hyped up ahead of her new show, “Joseline’s Cabaret: Atlanta.”

After wreaking havoc in Miami, Joseline is back in Atlanta for Season 2 of “Joseline’s Cabaret,” which premiered on April 18th.

Hours before the premiere, the Zeus Network hosted a red carpet premiere in Atlanta. Joseline and her man Balistic Beats were all wrapped up in love on the carpet. Meanwhile, “Little Women: Atlanta” star Ms. Juicy was also in the mix:

Before the Season 2 premiere of “Joseline’s Cabaret” aired, Zeus Network shared a snippet from the first episode before it aired and it sent EVERYONE. The soundbite instantly went viral.

In the clip, one of the stars on Joseline’s new show opened up about what she has endured in life and shared she had recently aborted twins after the kids’ dad left her.

“It hit home for me,” the woman said. “The gutter is a rough place, and you gotta do any and everything to make it. Every situation, including aborting twins, to better yourself.”

Right after she shared that information, one of the other ladies responded, “Damn, double homicide.”

”B*tch,” the woman said back to the commenter before the clip ended.

Following the viral clip, Joseline shared what she was thinking in that moment when it happened during an interview with Madame Noire.

At the time, we had just come in the house. I had just let the ladies come into the house after their long travels. Everybody was kind of tired and I was tired too. I didn’t really hear that part when I was there on set. The one young lady who was telling her story, she was so destroyed and crying that I was just giving her all my attention. I was still kind of shocked by her story. I was still processing everything.

So, I don’t know how I felt. It was so many girls in the background just talking. I had to figure out what happened. But at the moment, I was just like, ‘Whoa.’

I knew that if I allowed the ladies to come into the house, to join Joseline’s Cabaret and to be in this performance with me and trust me, I also have to let be who they are and say what they need to say.

On Sunday, April 18, you gon to be able to see how that conversation ended.

The former “Love & Hip Hop: Atlanta” star also chopped it up with Leah Henry about the viral moment. Find out what she said below at the 2:30-minute mark:

Oop!!! “May I?!” Did @luckyhustla really just ask @joseline for permission to throw hands with @bluefacebarbi?! We can’t make this shxt up!!! Tune in to the PREMIERE of #joselinescabaretatlanta this Sunday April 18th at 8pm EST!!! Link in bio! Subscribe now!!! pic.twitter.com/xRHFPPjwrj

A fight broke out when one of the white women on the show said “n*gga.” Peep the clip above. 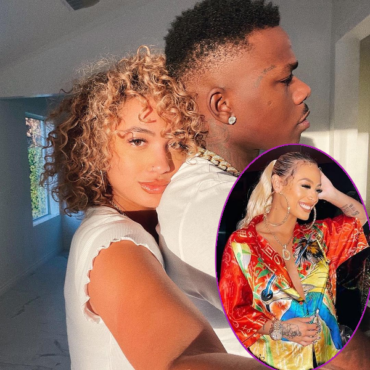 Is DaBaby Having Another Baby?! DaniLeigh’s Midsection Is Sparking MORE Pregnancy Rumors

Is DaBaby having another baby? Fans sure think so after seeing DaniLeigh’s midsection. It’s very much giving pregnancy. Check out her stomach for yourself and decide inside… From a breakup to a baby?! Possibly. It appears DaniLeigh’s belly is growing and she isn’t exactly hiding it. No pregnancy announcement has been made, but it sure seems like she’s hinting at possibly being pregnant. And since she was last linked to […]