Joie Chavis did a Q&A where she revealed she does NOT receive child support from her kids’ rapper fathers, Bow Wow & Future. Oh? But is this totally true, or a play on words?

Joie Chavis hopped on her YouTube channel to dispel assumptions made about her.  And as you can guess, it’s going viral.

During the candid Q&A, she made sure to let everyone know she is NOT a gold digger and then revealed she doesn’t even receive child support from the fathers of her children, Bow Wow & Future. Joie shares a 9-year-old daughter, Shai Moss, with Bow Wow and a 2-year-old son, Hendrix Wilburn, with Future.

“I feel like a lot of people say that. I am not a gold digger,” she explained at the 2:20-minute mark. “I have worked since I was 15. I take care of my kids. I don’t get any child support. Repeat that. I don’t get any child support. I don’t really need to ask for certain things for my kids cause I can do everything myself. If their fathers want to do certain things for them, they do it on their own time. I don’t really ask for anything.

It’s unclear if her children’s’ fathers pay for child care in other ways than just straight cash child support sanctioned by the state – like purchasing the homes she and the kids live in, the cars, nannies, school, etc. Just because someone isn’t receiving court sanctioned child support doesn’t necessarily mean they’re not receiving any support at all. Regardless of if it’s sanctioned or “fathers do it on their own”, child support is child support – financial support for the children THEY helped make. This has nothing to do with whether a mother can additionally provide and care for her own as well.

Even if a mother is a billionaire, it shouldn’t matter.  One parent should not be 100% financially absolved from taking care of their child.

We all need to be clear when speaking on topics such as this as to not create a subpar standard of expectations, and we need to be 100% honest about where the money comes from if a person decides to publicly speak about their money, businesses and “things” money pays for.

During the Q&A, she also made it clear that she’s NOT a “h*e” and that she would love to get married one day. If her husband wanted a child, she said she wouldn’t be opposed to having more children.

Also, Joie wants everyone to know that she’s not materialistic.

”I definitely have some money,” she said about her living situation right now. “I couldn’t afford to go into Chanel and buy what I want, but I can now.”

Joie said she and Bow Wow have a good co-parenting relationship and that she looks at him like a brother now. Oh.

Bow Wow – who starred in The Fast and the Furious: Tokyo Drift – is featured in the new trailer for the upcoming F9 film, which is the ninth chapter in the Fast & Furious Saga. The star-studded cast includes Vin Diesel, Michelle Rodriguez, Tyrese Gibson, Chris “Ludacris” Bridges, John Cena, Charlize Theron, and more. Cardi B also stars in the film, but she does not appear in the trailer.

Check it out above. It hits theaters June 25th. 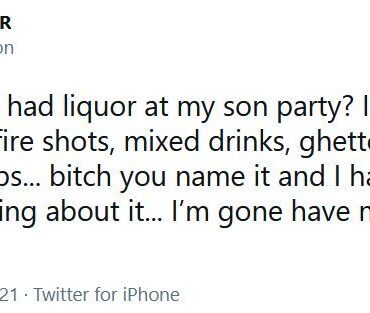 Ari Fletcher Says Everyone Who’s Worried About Her Drinking At Her Son’s Party Can Go To H-ll + Ari, G Herbo & Taina Now One Big Happy Family

Rapper G Herbo and his son’s mother Ari Fletcher threw a birthday bash to celebrate their son, Yosohn’s, third birthday and they were met with backlash for serving alcoholic beverages. To everyone who has a problem with it, Ari wants you to know she’s unbothered by your opinions. More inside…           View this post on Instagram                     […]