John Legend got behind his piano and delivered some “feel good” vibes during his performance during Joe Biden and Kamala Harris’ inauguration special. Watch the EGOT’s performance, plus deets on his wife Chrissy Teigen scoring a follow from Biden inside…

Joe Biden and Kamala Harris were sworn in as President and Vice President of the United States yesterday, launching a peaceful era across the nation.

After the day’s festivities, Biden’s “Celebrating America” inauguration primetime special aired, hosted by Tom Hanks, on television. Seated behind a grand piano near the Lincoln Memorial, John Legend delivered his rendition of “Feeling Good,” which was made famous by legendary artist Nina Simone in the ‘60s.

Catch the good vibes below:

Today absolutely had us *feeling good*!

Always an honor to have @JohnLegend make us dance, and @chrissyteigen make us laugh. #Inauguration2021 pic.twitter.com/ip4sUesrrK

After his performance, the EGOT thanked Biden for asking him to perform:

Thank you for asking me to perform. It was so special for me to celebrate with the nation in front of the memorial to one of our greatest presidents. AND I loved honoring the late great Nina Simone, my constant source of musical inspiration. https://t.co/9YBN74w3ck

”Thank you for asking me to perform. It was so special for me to celebrate with the nation in front of the memorial to one of our greatest presidents. AND I loved honoring the late great Nina Simone, my constant source of musical inspiration,” he tweeted.

ran our asses up the stairs for this shot. just incredible to be here. sober. I know that’s weird but it’s like…a different world for me. everything is new and better. very happy. the most happy bigly happy pic.twitter.com/kdbp9A8ocE

Earlier yesterday, John’s wife, Chrissy Teigen, hopped on Twitter where she jokingly asked Joe Biden to follow her since the @POTUS account that was run by Trump blocked her years ago:

”I have been blocked by the president for four years can I get a follow plz,” she tweeted.

Trump blocked Chrissy in Sumer 2017 after she tweeted him, “Lol, no one likes you.” Ha!

After 9 years of hating Donald J Trump, telling him “lol no one likes you” was the straw pic.twitter.com/MhZ6bXT1Dp

The model mom has officially been unblocked by the @POTUS account and it’s now following Chrissy. She’s the only celebrity the account follows at this time:

”OH MY GOD!! I can finally see the president’s tweets and they probably won’t be unhinged,” she tweeted after Biden started following her.

John & Chrissy were in Washington D.C. yesterday for the festivities and they brought their kiddies, Luna & Miles Stephens:

It’s a lovely day around the USA! Thank you @ddlovato for helping America get dancing tonight. #Inauguration2021 pic.twitter.com/QtRxWg0mQD

Singer Demi Lovato did a cover of Bill Withers’ “Lovely Day” with help from some virtual backup singers. Peep the clip above.

Singer Katy Perry – wearing an all-white Thom Browne ensemble – literally lit up the inauguration event with a performance of her track “Firework” outside of the Capitol as fireworks exploded in the air. Check it below:

Thank you @KatyPerry for lighting up the night with your sparkling performance of “Firework.” #Inauguration2021 pic.twitter.com/QAarZwLApB

And that’s a wrap on #Inauguration2021! Goodnight @POTUS and @VP, and goodnight America. pic.twitter.com/aV810N2q5n 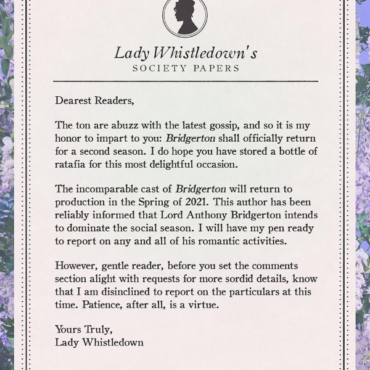 Netflix’s “Bridgerton” has been renewed for Season 2. Yep, Lady Whistledown confirmed the rumors. More inside… Dearest readers! You’ll be happy to know another season of “Bridgerton” is officially on the way! Bomb television producer Shonda Rhimes has another HIT on her hands. Netflix just announced plans for the upcoming 2nd season of the hit series about esteemed families of British high society and their romantic pursuits. The show is […]