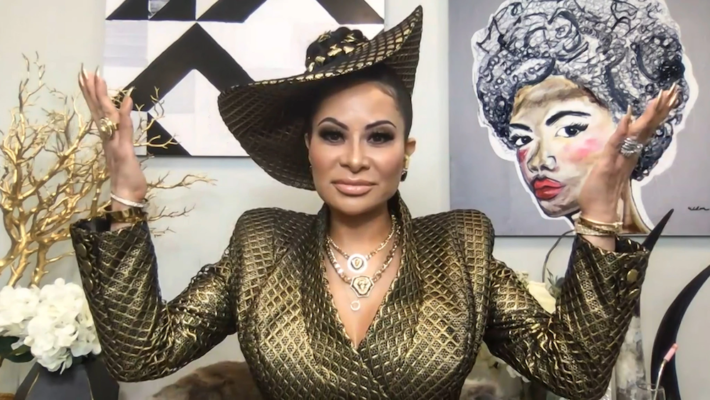 “It was a very, very stressful time,” Johnson — who was tasked with designing her outfit for the premiere — told us. “I wasn’t sleeping. I was not taking care of myself physically and mentally, but I was still operating on adrenaline.”

He added, “It was like the most traumatizing months of my life.”

While Johnson claims he doesn’t know who leaked the audio, he’s happy someone recorded it.

He also claimed that the incident was actually Shah’s fault because she caused the delays in getting the outfit — which she wore on “Watch What Happens Live with Andy Cohen” that night — together.

“There was a delay on the fabric, which was on her part,” he claims. “I was waiting for her to get all the money transferred over to the credit card for it to be purchased. That process even delayed it more.”

Johnson says that he was finally able to make the purchase on Nov. 9, but had just 17-20 hours to turn around and make the two-piece suit for her.

During his short time with the 47-year-old reality star, Johnson designed around 12 looks for her, including her Biden-Harris dress, her cast photo dress and reunion dress.

“I really felt like she was a sister and I was her brother kind of situation,” he said, adding they’re both of Polynesian descent. “We came from the same blood, the same race.”

However, Johnson also alleges that Shah neglected to pay him for most of his work, claiming on Instagram he was last paid “in September even though I continued working through January.”

“A lot of the reason why I continued working with her [despite] those circumstances [was] because I truly cared for her,” he told us. “How we prove it to our siblings or to our sisters, our people that we look up to is that we do things because we show our love.”

Reps for Shah didn’t immediately get back to us.

Johnson — who also designed Heather Gay’s reunion frock — says he quit working for Shah on January 11, following the taping of the “RHOSLC” reunion. The final straw for him was when Shah didn’t give him a shoutout.

“I’m watching everybody go around saying who they’re wearing,” he recalled, “and Heather said me and then when it went to Jen, I was expecting her to say the same thing and say my name and she didn’t and that hurt me.”

He added, “That hurt me so much because it was the last dress that I was going to do for her for Season 1.”

Johnson hopes that speaking out about what he allegedly experienced will help others in similar situations.

“I have to speak my truth and hope that if there’s anybody else that is working in a hostile work environment, that they will come out and speak out about it,” he said, adding that he wants Shah to see it and “take responsibility for her actions and behaviors.”

“I know that’s been a problem during her Season 1 is not taking any responsibility or whatever because I was there for the witness. I really do wish her the best of luck for Season 2 — she’s going to need it.”

Jen Shah is going to have a rough second season.

Capitol Insurrectionist Suspect Flees to Kenya, Is Deported Back to America to Face Justice