Jay-Z Drops Parenting Gems In Rare Interview – ‘Feeling Loved Is The Most Important Thing A Child Needs, Not ‘Here’s This Business’’

Jay-Z does a rare interview with The Sunday Times where he drops some parenting gems and shares what it’s been like in quarantine with his wife Beyoncé and their three kids, Blue Ivy, Sir & Rumi Carter. More inside…

It’s very rare Jay-Z does interviews – let alone share details about his life. But the Hip Hop mogul got candid about his personal life in a recent Zoom interview with The Sunday Times while promoting his partnership with Puma.

“In the beginning it was time for everyone to sit down and really connect, and really focus on family and being together, and take this time to learn more about each other,” he said. “And then, as it wore on, it’s like, ‘OK, all right, what is the new normal?'”

Hov has been figuring out his new normal in quarantine while managing his many businesses that helped him to become Hip Hop’s first billionaire, according to Forbes. While he’s all about his business, he’s a father first. And the business mogul believes the best thing you can give a child is love.

“Feeling loved is the most important thing a child needs,” The Roc Nation founder said. “Not ‘Here’s this business that I’m going to hand over to you, that I’m creating for you.’ What if my child doesn’t want to be in music or sports? I have no idea, right? But as long as your child feels supported, and feels loved, I think anything is possible.”

And that’s on Mary Had A Little Lamb.

He said the key to raising a successful child is to “provide a loving environment.”

“Be very attentive to who they want to be. It’s easy for us, as human beings, to want our children to do certain things, but we have no idea. We’re just guides,” he said.

In April, Jay & Bey’s daughter Blue Ivy won her first Grammy Award for Best Music Video for the song “Brown Skin Girl,” which was a cut from Bey’s Lion King: The Gift. Blue Ivy is the second-youngest Grammy winner in history.

It’s clear she’s surrounded by love because our niece is flourishing. 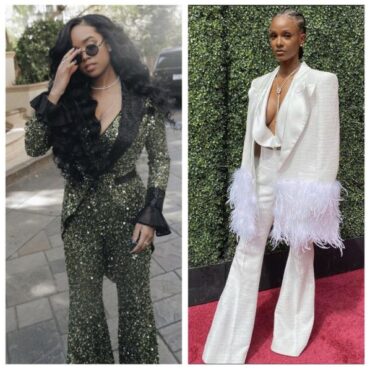 You can call H.E.R. and Tiara Thomas Oscar winning singers now! The ladies copped an Oscar award for their track “Fight For You” and the win pushed H.E.R. to the halfway mark of the EGOT status. And she’s totally gunning for it. More inside… Let the winning continue! 2021 is proving to be a BOMB year for singers H.E.R. and Tiara Thomas. After copping a Grammy earlier this year, the […]