IT’S OVER OVER: La La Anthony Reportedly FILES For DIVORCE From Carmelo Anthony! 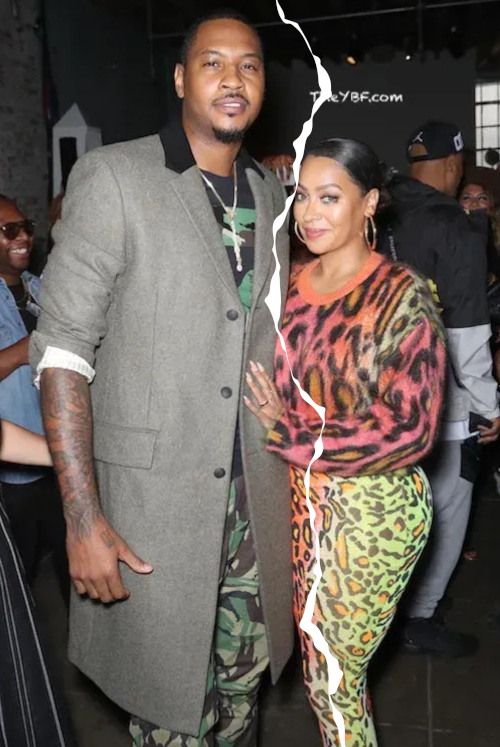 La La Anthony is FED UP with her estranged husband Carmelo Anthony. Or maybe she’s just finally putting the nail in the half open casket.  She pulled the trigger on a divorce 11 years after they said “I Do.”  And the divorce announcement comes on the heels of rumors that the NBA player was creeping around with Lee Daniels’ niece.

Well, the writing has seemingly been written on the wall for years and now…it’s over.

La La Anthony has officially filed for divorce from Carmelo Anthony in New York following years of cheating rumors. According to TMZ, “The Chi” actress and the NBA baller have been separated for quite some time, but remained friends.

Now, their 11-year marriage has come to an official end, citing “irreconcilable differences”. Sources close the couple told the publication the former couple wanted to sort out all of their issues behind-the-scenes to ensure a “smooth transition” for their 14-year-old son, Kiyan Anthony. The couple tied the knot in 2010.

Days ago, there were rumors swirling around that Melo was creeping with the niece of award-winning director Lee Daniels.

Fans found images of her with backgrounds that appear to have the same background as Melo. Check it below:

What’s even more interesting is the fact Lee Daniels posted his niece on his IG recently:

The divorce announcement comes a few years after the couple separated in April 2017. It was reported La moved out of the family’s New York home into her own place after 7 years of marriage (at that time). The original breakup news back then came as rumors were circulating that Melo allegedly got his (alleged) mistress, Mia Burke, pregnant. That still hasn’t been confirmed by Melo as of yet, but Mia has all but done so.

In June 2017, LaLa revealed on the “Wendy Williams Show” that she didn’t have any plans on divorcing the NBA star and that she was totally focused on raising Kiyan in a healthy environment.

In September 2018, the “Power” star showed up with the NBA All-Star for his “Melo Made” capsule collection event that was held in the Meatpacking District of NYC. And it appeared they were back ON again.

On La La’s birthday in June 2019, Carmelo was spotted yachting it up in France with a mystery woman, who is believed to be a model named Sara Smiri.

Melo did his damnedest to win his wife back after the pictures were released, putting up heartfelt social media posts to win her back and claiming the woman was someone else’s wife. Before hitting the party scene with her friends following the yacht scandal, she posted and deleted an image of a heart with knife through it right after Melo denied the cheating rumors. Peep the clip above.

Divorce rumors were swirling then, but Melo’s attempt to win her back seemingly worked.  Back then, at least. The couple was https://theybf.com/2019/07/17/oh-lala-carmelo-anthony-do-dinner-in-la-am… “>spotted on a dinner date with their son a month later.

In 2013, there were rumors that their marriage was “on the rocks,” so it’s not a complete shocker these two are finally calling it quits.

The FBI raided the home of black Hollywood actor Siaka Massaquoi - who has starred in "NCIS: Los Angeles & "S.W.A.T." - after he allegedly participated in the January 6th U.S. Capitol insurrection. Deets inside... As the saying goes, all skinfolk ain't kinfolk. The FBI is still investigating the mob of Trump supporters who descended on the U.S. Capitol for a coup attempt as Congress was counting up the electoral votes to officially confirm the election results that President-elect Joe Biden […]