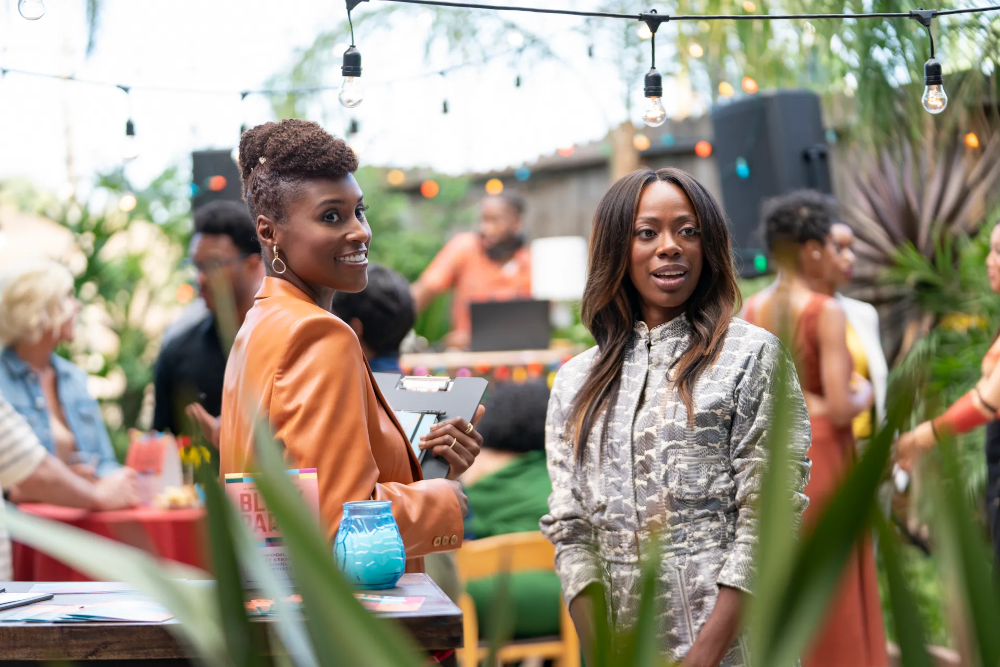 If you were wishing for an “Insecure” movie to follow up the series’ finale, sorry. It’s not happening. However, an “Insecure” spin-off could possibly happen.

Admit it. “Insecure” is one of the blackest most entertaing shows that most older millenials enjoy and can relate to. So, when news hit that the show was ending, naturally, folks weren’t happy about it.

And since we’re in an era of reeboots, spin-offs and post-series movies, it wasn’t farfetched when rumors about an “Insecure” movie started circulating.

As you know, the hit HBO series is set to air its fifth and final season (dubbed “Season Bye-ve”), which premieres this Sunday, October 24th. It’s the beginning of the end. However, its not the end for “Insecure” creator and star, Issa Rae.

Making her rounds on the promo trail, Issa stopped by Power 105’s “The Breakfast Club” to chop it up about the ending of her hit HBO series and what she has in store for the future.

Earlier this year, it was announced Issa nabbed an eight-episode series order at HBO Max for the half-hour comedy “Rap Sh*t.” The multi-hyphenate entertainer revealed she wrote “Rap Sh*t” while on lockdown and confirmed had she not been confined to her home, she never would have had the time to create the show.

It’s bittersweet knowing “Insecure” is about to come to an end, but Issa told “TBC” that she’s excited about the show ending.

“I’m not sad. I feel like it’s time. I’m excited if anything. I’m excited that people are excited about the end of the show right now because I know they’re going to be mad later,” she said.

Naturally, fans have been begging her on social media to either not end “Insecure” or, at the very least, do a movie for the show. Oh well. It’s not happening. When asked if she would do one, she responded, “absolutely not.”

The “Insecure” writers’ room felt pressure while writing the finale season of the hit show, hoping they wouldn’t “mess it up.” As they were brainstorming ideas, one of the writers encouraged a different approach to writing the final season, which was to pretend there would be a Season 6.

“I mean, anything can happen,”Issa said.

Who would you want to see from the cast to get a spin-off?

The up-and-coming Hollywood mogul is moving on to new things – like her new show, “Rap Sh*t.” She said she’s currently living in Miami working on the HBO Max series. And she said the show is nothing like “Insecure.”

The EMMY nominated actress is definitely busy, like opening up new coffee shops and doing her thing in the Marvel Cinematic Universe, joing the cast of Spider-Man: Into the Spider-Verse 2. There’s no time for drama. When the radio hosts asked her about her throwback “beef” with Lauren London and reuniting, she responded perfectly.

Get into her full interview below:

.@IssaRae says she’s “just getting started,” ahead of the premiere of the final season of her show @insecurehbo.

She’s also signed a multi-million dollar deal with Warner Media saying, it’s “an opportunity to bet on myself.” pic.twitter.com/cIveW73HoW

Issa Rae chopped it up with Gayle King on “CBS Mornings” about finally feeling “comfortable” in Hollywood, like she belongs.

“I feel like I’m just getting started. I feel like a beginner in many ways. I still have so much to do,” Issa said.

The comedian/actor/writer – who recently got married – also dished on her reported eight-figure overall deal with WarnerMedia. Peep the clip above.

Boss lady @IssaRae on the teal carpet of the #InsecureHBO premiere pic.twitter.com/iA4p02ZVx9

Boss Lady Issa served up some underboob action at the premiere of “Insecure” Season in Los Angeles last night.

It’s been a lot of pressure of Issa to serve up the perfect ending to “Insecure” fans. She revealed she re-wrote the final scenes just two weeks before filming.

“It just didn’t feel right,” she said about the original ending. “I think it was a good finale on its own. However, I just didn’t feel like it aligned with the story that we have been telling for five seasons, much less even this season. It felt like the ideal version. I just wanted to make an ending that felt more realistic and true to the characters.”

Issa Rae snaps it up with her “Insecure” co-stars Yvonne Orji and Jay Ellis cover Entertainment Weekly’s newest digital cover where they reflect on the show’s hella great run.

“I think the shows where you get to watch people just being excite me,” says Rae, 36, who serves as an executive producer and has received two Emmy nominations for her relatable lead performance (she also received an Outstanding Comedy nod in 2019 as EP). “We always say internally in the room, it’s [about] being Black on a Tuesday. Those are the stories we’re telling.”

“I didn’t realize at the [beginning] how important a story like this was,” adds Ellis, 39. “It’s like, we don’t want to watch normal life — but once you get into it, you realize that’s important because we need to normalize these things because we don’t see them enough.”

“What really stood out [to the writers] is we hadn’t seen examples of friendship breakups happen on screen, and I’ve experienced it twice. That s— hurts,” says Rae. “You don’t really have the same sympathy or the same knowledge or guidance that you have when a romantic relationship ends. To really dissect the dissolution — the slow dissolution of a friendship — was something that was relatable to a lot of people.”

You can read more here. https://ew.com/tv/insecure-final-season-digital-cover-story/

“Insecure” fans will start the beginning of the end when Season 5 kicks off Sunday, October 24th at 10pm EST on HBO.

BEYHIVE! New music from Beyoncé is coming soon. The Grammy winner teases her new track "Be Alive" in the newest trailer for King Richard. Take a listen, plus find out how Mrs. Carter got involved with the film and more inside... Now we know why Beyoncé has been EXTRA active on social media lately: She has new music and a new collaboration dropping! And we're glad because we're thirsty for […]