Is Anyone Surprised? Phoenix Police Officers Caught on Body Cameras Saying They Wish to ‘Stomp’ BLM Protestors — Among Other Awful Things 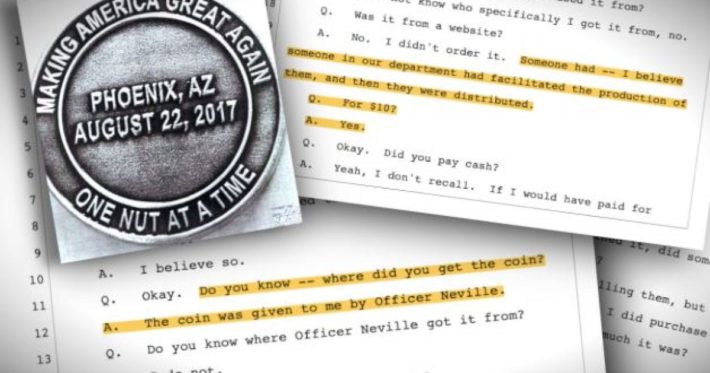 The Phoenix Police Department is facing  allegations of discriminatory arrests and political prosecutions in protest cases — and their body cams, for once, captured alleged police misconduct on camera.

Apparently unaware a camera was still recording, three officers continually disparage a group of protesters on October 17, 2020 by calling them things like “dickheads” and “asshole kids.”

One wondered why the protest response team didn’t “stomp on them right away.”

Another responded, “Gas em. I don’t give a sh** if we just gas them and let them run like crazy…(inaudible) the sh** out of them, who gives a sh**?”

At the end of the video, one of the officers calls a citizen — who shouted at them as they drove by — a “f***ing liberal piece of sh**.”

The three officers appear to have played a supporting role in the response to a protest by the small group.

But it’s those types of comments — plus the celebratory challenge coin owned, shared, and sold by members of the city’s protest response team — that will be at the heart of the defense by attorneys representing 18 defendants arrested that night.

“Like the Phoenix police officers caught on body camera making disparaging and violent remarks about (defendant) and the other defendants in this case, this challenge coin represents a disrespect for First Amendment rights and disdain for left-leaning protesters that apparently permeates the Phoenix Police Department and certainly permeated the grand jury presentation in this case,” according to recent a defense filing.

The 18 individuals arrested on October 17 have been charged as a criminal street gang labeled “ACAB.”

ABC15 obtained the grand jury transcript from the case.

Arizona statutes regarding a criminal street gang classification are broad and only require two of the following criteria to be met: (1) Self proclamation; (2) Witness testimony or statements; (3) Written or electronic correspondence; (4) Paraphernalia or photographs; (5) Tattoos; (6) Clothing or colors; (7) Any other indicators.

Phoenix Police Sgt. Doug McBride, a “grenadier” who manages the Tactical Response Unit and former gang detective, testified that all members of the group met the criteria for three reasons.

The first is the chanting of “ACAB… All Cops are Bastards,” which he claimed is self proclamation. The second was most of the group dressed in black, which meets the colors requirement. And the third was many of the group carried umbrellas, which McBride claimed was part of their uniform.

McBride’s tactical response unit is facing heavy scrutiny because many members admitted to owning a challenge coin for previously shooting a protester in the groin with a pepper ball.

The coin’s phrasing has been linked to extremist hate speech.

There’s no indication that the three officers recorded on the newly-obtained body camera video owned the coin or even knew about it.

However, the officers did discuss the umbrellas.

One of them said it was a “new trick” she hadn’t seen and compared concerns about their use to the “Penguin” villain in Batman movies.

The three officers also lamented having to wear body cameras.

OFFICER 1: We actually want to do the job like we did 10, 15 years ago. But it’s never going to come back. If they ever came back and they said, “Guys, just f***ing kick some f***ing ass out there and reduce crime”…

OFFICER 2: So you won’t be in f***ing handcuffs doing your job. Saying okay, let go watch some bodycam video to see just in case he struck somebody. I remember back when it was so much nicer.

OFFICER 1: I think this (body camera) has taken the job down the drain.

OFFICER 1: If I had to pick just one thing, there’s others, but it’s this.

OFFICER 3: It’s taken away so much of our discretion to be cool with people with like little bags of dope and stuff and we would grind it into the ground and go, ‘Hey.”

OFFICER 2: Or the meth pipe?

“I have been and will continue to be an advocate of the amazing work done in this department each day. However, I know that unprofessional, disrespectful and inappropriate behavior from even one of our officers tarnishes the badge but more importantly, it hurts the community we have sworn to protect. I will not allow the actions and speech of a few of the 4,000 men and women of the Phoenix Police Department destroy the trust and credibility of those we serve. When that conduct does not show respect, you can expect that I as the chief will take swift and decisive disciplinary action.”

“The more information we learn, the more concerned I become. I believe the majority of Phoenix Police officers do great work for our community every day. But it’s obvious we have deep rooted issues in the Phoenix Police Department that must be addressed. This department is going to change. I demand it. Chief Williams demands it. And the public expects it.”

The police doing terrible things while acting ‘in the name of the law’? Shocking.

The post Is Anyone Surprised? Phoenix Police Officers Caught on Body Cameras Saying They Wish to ‘Stomp’ BLM Protestors — Among Other Awful Things appeared first on LOVEBSCOTT. 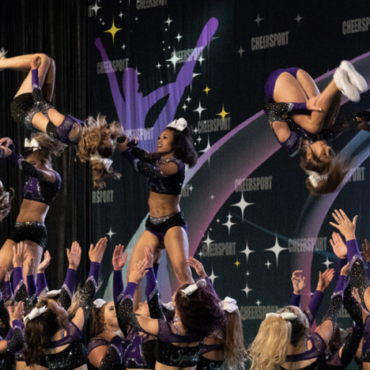 Help Us, Jesus: Atlanta Cheerleading Event With 40,000 Attendees Feared to Be Super-Spreader Event

Despite the ongoing COVID-19 pandemic, the city of Atlanta is hosting a big cheerleading competition this weekend and people are rightfully concerned that it will become a super spreader event, CNN reports. via Complex: 40,000 youth cheerleaders, coaches, and spectators from across the country are expected to attend the Cheersport National Cheerleading Championship on Saturday and Sunday at Georgia World Congress Center in downtown Atlanta. Per GWCC manager of marketing and communications Randy Lieberman, this will be […]