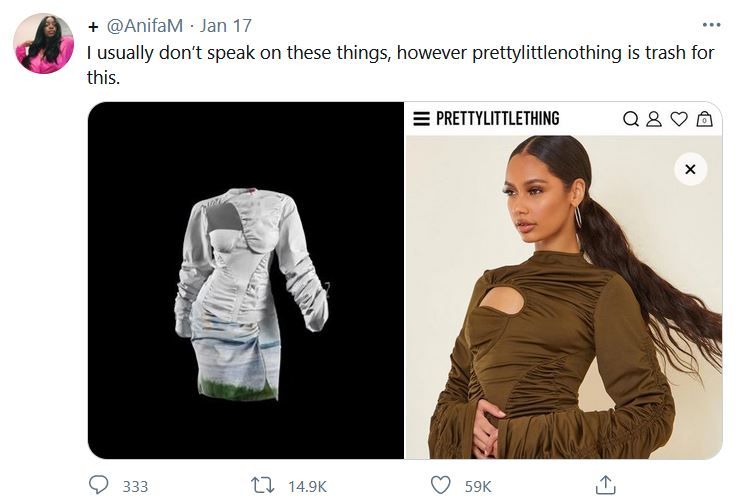 Indie fashion designer Anifa Mvuemba calls out fast-fashion brand PrettyLittleThing for stealing her designs and watering them down for a cheaper price. The UK-based fashion retailer responds to the accusations. Find out how what they said inside…

Sometimes you just have to call people out when they’re playing in your face. That’s what one black female designer did because she’s sick of how fast-fashion copies designs from hard working designers.

Indie fashion designer Anifa Mvuemba of HANIFA blasted PrettyLittleThing for jacking her designs. Apparently, the fast-fashion retailer produced a version of her Veronique blouse, which sells for $229, from her Pink Label Congo collection. PrettyLittleThing’s version of the blouse sells for only $55.

When Anifa saw it, sis was PISSED. And rightfully so. The black designer aired out her frustrations on her Twitter account.

“I normally don’t speak on these things, however Pretty Little Nothing is Trash for this,” Anifa tweeted in the caption of a comparison of the blouses.

The Faby’s Awards 2020 Designer of the Year told The Cut the inspiration behind her Pink Label Congo collection came from her family’s home country, Democratic Republic of the Congo.

“I had the option of being known as an African designer, but I wanted to be known as a designer,” Anifa said. “I feel like a lot of times when you’re African and you’re a designer, you are placed in this box or category and you stay there. I wanted to build my name up and become reputable and respected, so I told myself when the time is right, I will do a collection inspired by Congo.”

Anifa’s bomb collection is a tribute to her family’s home county, while PrettyLittleThing is only interested in making some quick coins. The fashion game is cold-hearted and since everything in the industry is all about “inspiration,” designers’ creations aren’t really protected. It’s a slap in the face (and pocket) to put your sweat, blood and tears into designs only for someone else to steal them and sell them off for a cheaper price.

I just hate how unprotected designers are. There are barely any laws or regulations when it comes to protecting designs. That’s a F-U to creatives. It’s a career just like any other and it deserves legal attention.

A PrettyLittleThing released a state to UK website The Voice to address the fashion controversy, denying their design is a watered down version of the Hanifa blouse.

“We have reviewed the product in question and can confirm our design inspiration was taken from an existing vintage style. There are noticeable differences between Anifa’s designs and ours.”

Unfortunately, this isn’t the first time this has happened to Anifa. In 2017, Anfia called out ASOS for creating an exact replica of an off-the-shoulder, long sleeved dress.

“Wow @ASOS you too??? This is CLEARLY a copy. Stop stealing from indie designers,” she tweeted.

Since ASOS basically ripped every single detail of her dress for their own, she had to speak out:

We know one thing, they better stop playing in sis face! There are tons of bomb pieces on her website that you can check out here.