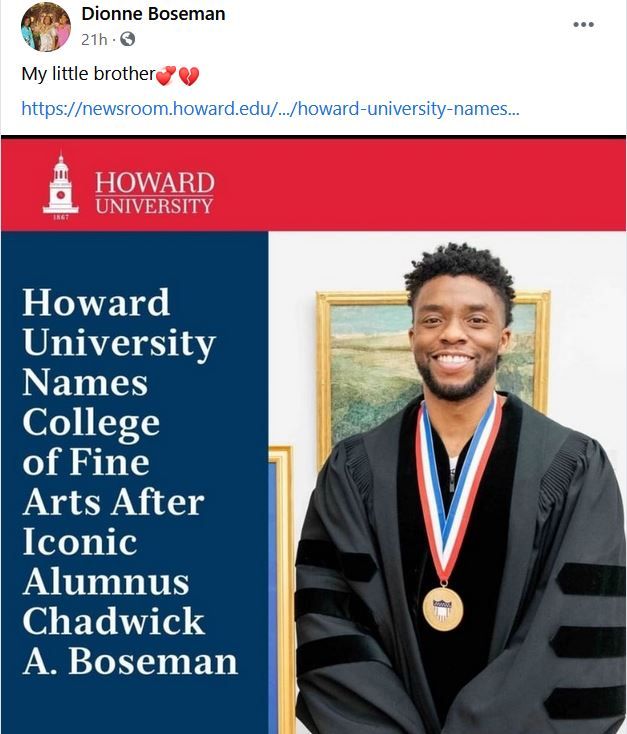 Chadwick Boseman’s alma mater, Howard University, is honoring him in a major way. The HBCU announced it will be naming its newly reestablished College of Fine Arts after the late actor. More inside….

Howard University is honoring one of its former students in a major way!

The HBUC announced that its naming its newly reestablished College of Fine Arts after late actor Chadwick Boseman. News of the honor comes on the heels of the university naming alumnus/legendary actress Phylicia Rashad as the dean of the Fine Arts school.

In 2018, the Black Panther star – a proud Howard alumnus – delivered the commencement speech to the graduating class. Sadly, he died last August after a long battle with colon cancer, which he fought privately. He was 43. Since then, the late actor has been scooping up awards for his work and his wife, Simone Ledward Boseman, has graciously accepted the awards on her husband’s behalf.

“When Chadwick Boseman returned to campus in 2018 to serve as our commencement speaker, he called Howard a magical place. During his visit, I announced our plans to reestablish the College of Fine Arts and he was filled with ideas and plans to support the effort in a powerful way,” said Howard University President Wayne A. I. Frederick.

“Chadwick’s love for Howard University was sincere, and although he did not live to see those plans through to fruition, it is my honor to ensure his legacy lives on through the Chadwick A. Boseman College of Fine Arts with the support of his wife and the Chadwick Boseman Foundation. I’m also elated to have the support of The Walt Disney Company’s Executive Chairman Bob Iger, who has graciously volunteered to lead the fundraising effort to build a state-of-the art facility and endowment for the college.”

“When you are deciding on next steps, next jobs, next careers, further education, you should rather find purpose than a job or a career,” he told the graduating students. “Purpose crosses disciplines. Purpose is an essential element of you. It is the reason you are on the planet at this particular time in history.”

Congratulations to all the future students of the Chadwick A. Boseman College of Fine Arts!

“Chad, you exemplify Howard’s core values of excellence, leadership, service, and truth,” the family wrote. “There is no one more deserving of such an honor.

”We are so proud of you, we love you, and we miss you every day. Congratulations to all the future students of the Chadwick A. Boseman College of Fine Arts! Special thanks to Howard University, Wayne A. I. Frederick, and Phylicia Rashad and to Bob Iger at Disney for leading fundraising efforts.”

A native of South Carolina, Boseman graduated from Howard University in 2000 with a Bachelor of Fine Arts in directing. During his tenure, he had the fortunate opportunity to be trained and mentored by Rashad, who recognized his talent early on.

“Unrelenting in his pursuit of excellence, Chadwick was possessed with a passion for inquiry and a determination to tell stories – through acting, writing, and directing – that revealed the beauty and complexity of our human spirit,” said Phylicia Rashad, who is elated about the news of Boseman’s recognition.

The Walt Disney Company’s Executive Chairman Robert A. Iger will personally lead fundraising efforts in honor of Boseman, a cherished member of the Disney/Marvel family, to build a new, state-of-the-art facility to house the college and an endowment for the Chadwick A. Boseman College of Fine Arts.

Watch his empowering 2018 commencement speech at his alma mater below: 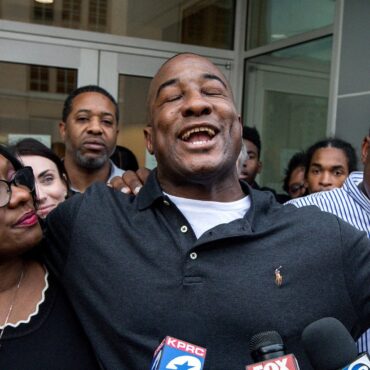 Newly tested DNA from under the victim’s fingernails exonerated Lydell Grant and convicted Jermario Carter for the murder of Aaron Scherhorn in 2010. Representatives from the Texas Court of Criminal Appeals ruled in favor of his innocence on May 19, 2021. What We Know: Grant was released in November of 2019 after being granted a $100,000 bond. With the help of his lawyer and executive director of The Innocence Project […]