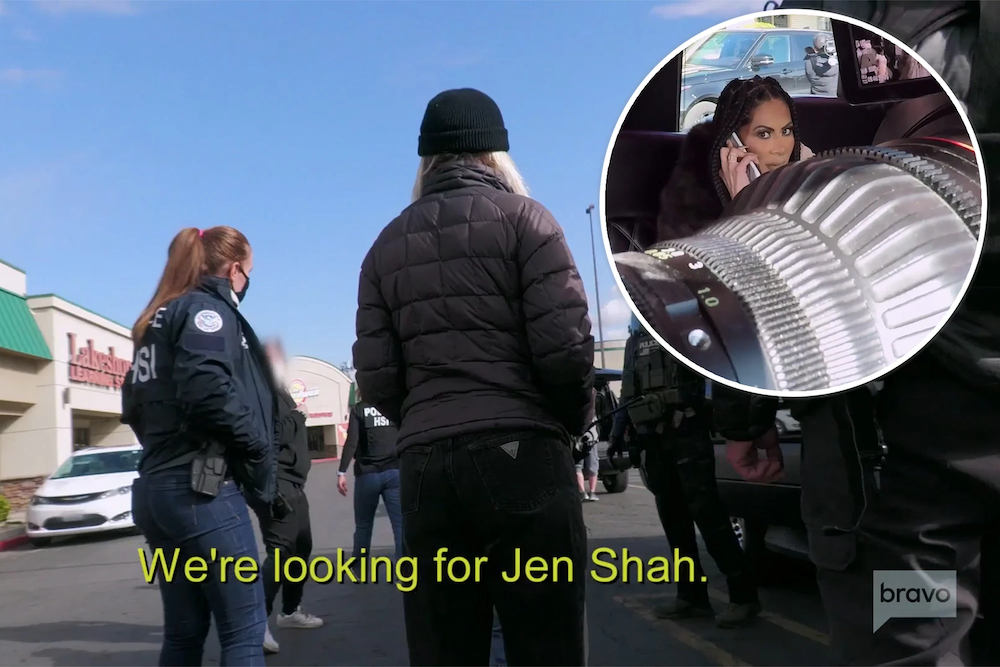 The highly-anticipated ‘SHArrest’ is upon us.

On Sunday night’s episode of The Real Housewives of Salt Lake City, Jen Shah’s legal troubles finally began to play out on television.

After the drama-filled luncheon when cast members Mary Cosby and Whitney Rose went head-to-head, the ladies were looking forward to a getaway to Vail, Colo., organized by Meredith Marks.

On the morning of the trip, Heather Gay arrived first at the bus before she was joined by Whitney, Jennie Nguyen, Lisa Barlow and Jen. Meanwhile, Meredith and Mary had arranged other travel plans.

As the production team checked the cameras on the bus and prepared to capture any potential drama, Jen received a phone call from her husband, Sharrieff Shah. Jen explained where she was before she repeated with concern, “I need to go to the house?”

Looking around, a worried Jen then turned to Whitney and asked her to turn off the microphone she was wearing.

Continuing her phone conversation outside and away from the other ladies, Jen then moved back toward the bus when Heather asked if she was okay. Jen then replied that she had “some bad news.”

“I just a phone call and Sharrieff Sr.’s in the hospital, he has internal bleeding, so I need to go,” she explained, later adding that her husband “had an appointment” and medical staff “weren’t sure if they need to do surgery.”

“I don’t really know what’s going on,” she continued, before Heather asked her if she and the other women should stay in Salt Lake City to be by her side.

A distracted Jen told Heather that it was fine for the other ladies to go on their planned trip, and she would meet up with them if she could.

Moving inside the van, Jen then explained to Whitney, Jennie and Lisa that she would not be making the trip with them, offering the same explanation she had just given to Heather moments before.

As the ladies offered their support to Jen, the reality star took off with one of her assistants, leaving the foursome to chat about Jen’s situation.

After going back and forth about whether they should cancel the trip or still go, the ladies were then shocked to notice police and Homeland Security officers gathered around their vehicle.

As authorities pressed the Bravo producers for more information about Jen’s whereabouts, Whitney suggested that this could be a prank, before Heather inquired about what was happening with police outside.

With Heather explaining everything they knew about how Jen said her husband was ill, Whitney then confessed to Lisa and Jennie that Jen had asked her to turn off her microphone, as Lisa realized, “It’s not about Sharrieff.”

Heather, Lisa, Whitney and Jennie were then left stunned, trying to figure out what was going on, before a “To be continued” message appeared on the screen.

Jen and her assistant Stuart Smith were arrested and charged in March with one count of conspiracy to commit wire fraud in connection with telemarketing — through which they allegedly victimized 10 or more persons over the age of 55 — and one count of conspiracy to commit money laundering. The two pleaded not guilty during an arraignment in April.

In a prior press release announcing their arrest, prosecutors alleged that Jen and Stuart carried out a nationwide telemarketing scheme with the help of others between 2012 and March of this year. They are accused of having “defrauded hundreds of victims” with purported business services.

Prosecutors claim Jen and Stuart’s scheme was a “coordinated effort to traffic in lists of potential victims,” referred to as “leads.” From there, they allegedly sold those leads to telemarketing companies that would attempt to sell business services to the targeted individuals. Both “received as profit a share of the fraudulent revenue per the terms of their agreement with those participants,” according to the indictment.

According to a court document obtained by PEOPLE in July, Jen and Stuart are both “Tier A” defendants in the ongoing fraud case. The document claims Jen and Stuart were “responsible for orchestrating the broader scheme” and “supplying the leads that sustained” the telemarketing companies.

The post Homeland Security Searches for Jen Shah as the Ladies Prepare for Vail Getaway on ‘The Real Housewives of Salt Lake City’ appeared first on LOVEBSCOTT. 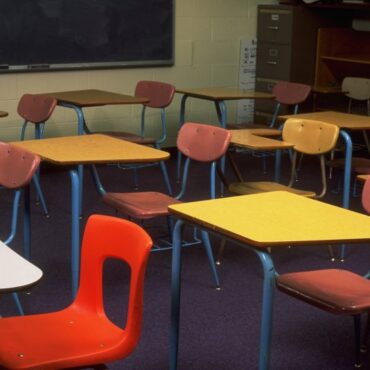 Can you believe we live in world where people actually believe that Donald Trump is still — somehow — president? A history teacher who reportedly told students that Donald Trump remains president, among other conspiracies, was recently fired from a Southern California middle school. via NYDN: The unidentified educator’s exit from Anacapa Middle School in Ventura was confirmed Friday by the school district, the Ventura County Star reported. Her claims, […]