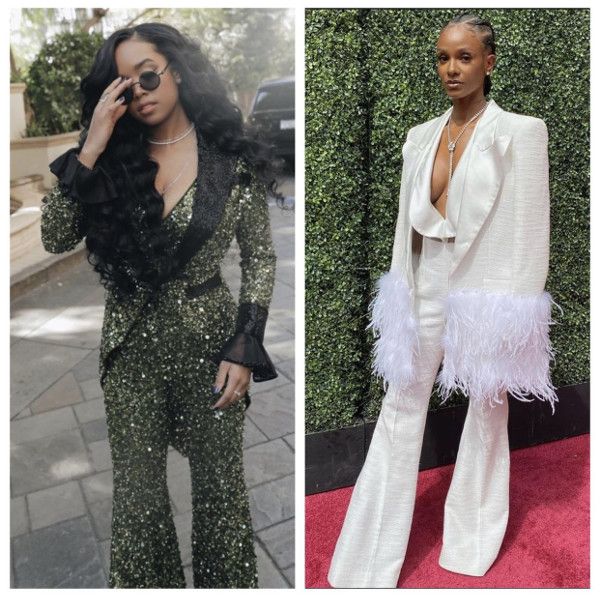 You can call H.E.R. and Tiara Thomas Oscar winning singers now! The ladies copped an Oscar award for their track “Fight For You” and the win pushed H.E.R. to the halfway mark of the EGOT status. And she’s totally gunning for it.

2021 is proving to be a BOMB year for singers H.E.R. and Tiara Thomas. After copping a Grammy earlier this year, the H.E.R., Tiara and Dernst D’Mile Emile II scooped up another major award: an Oscar.

H.E.R. (real name Gabriella Sarmiento Wilson), Tiara Thomas and D’Mile took home their first Oscar award on Sunday night for Best Original Song for “Fight For You” from the film Judas and the Black Messiah. The win pushed H.E.R. to the halfway mark of EGOT (Emmy, GRAMMY, Oscar, and Tony) status.

Backstage at the Academy Awards, H.E.R. made it clear she plans on gunning for the prestigious EGOT.

“Oh, there’s absolutely going to be an EGOT in my future, hopefully,” she dished. “But yeah, I’m also super passionate about acting as well, so you may see me up here as an actress. And I love musicals, me and Brandy have been talking about it a lot.”

“Honestly, I cannot believe that we’re here. I’m still speechless, I feel like the Oscars are happening tomorrow, and I’m dreaming right now. I’m still pinching myself, so I have no words.”

The 23-year-old singer was referencing Brandy’s role in Cinderella. She added, “She’s inspired me since she did a musical.”

H.E.R. also shared the significance of her win during our ongoing fight against racial inequality.

“I couldn’t think of better timing to win something like this,” she shared. “I was just happy to be here at the Oscars, I was happy to be a part of an important film. This film is educating people. I feel connected to my roots, I know more about the Black Panthers because of being part of this film so the education that it gave me and the history that it gave me is just, nothing compares to that. And also, you know, I feel like this for the people.”

H.E.R. paid tribute to the late singer Prince with her red carpet look.

I’ve had this picture of him saved for so many years… it was destined for this moment. Thank you, Prince!  https://t.co/7YjdDZ7LgT #Oscars pic.twitter.com/gLC4y641Ep

The soulful singer donned a custom royal purple Dundas jumpsuit and cape, which was inspired by Prince‘s 1985 Academy Awards look. That was the year Prince won Best Original Song Score for the music in his unforgettable film Purple Rain. She finished her look with matching Giuseppi Zanotti heels and jewelry by Chopard.

As for her collaborator…

Braided up beauty Tiara Thomas looked like a goddess in an all-white Jovana Louis ensemble that featured feathers.

They said I fucked it up on the red carpet last night #oscars pic.twitter.com/EbwmM03MQR

Desiree Lindstrom – DMX’s fiancée – is mourning the death of her soulmate, DMX, following his memorial services that took place over the weekend. During the public ceremony, X’s ex-wife Tashera Simmons shared a special moment with Desiree that had everyone’s eyes filled with tears. Also, Kanye West has raised $1 million for X's 15 children. Everything inside…   DMX’s loved ones are still coming to terms with his sudden death, which is totally understandable. The 50-year-old rapper died at […]