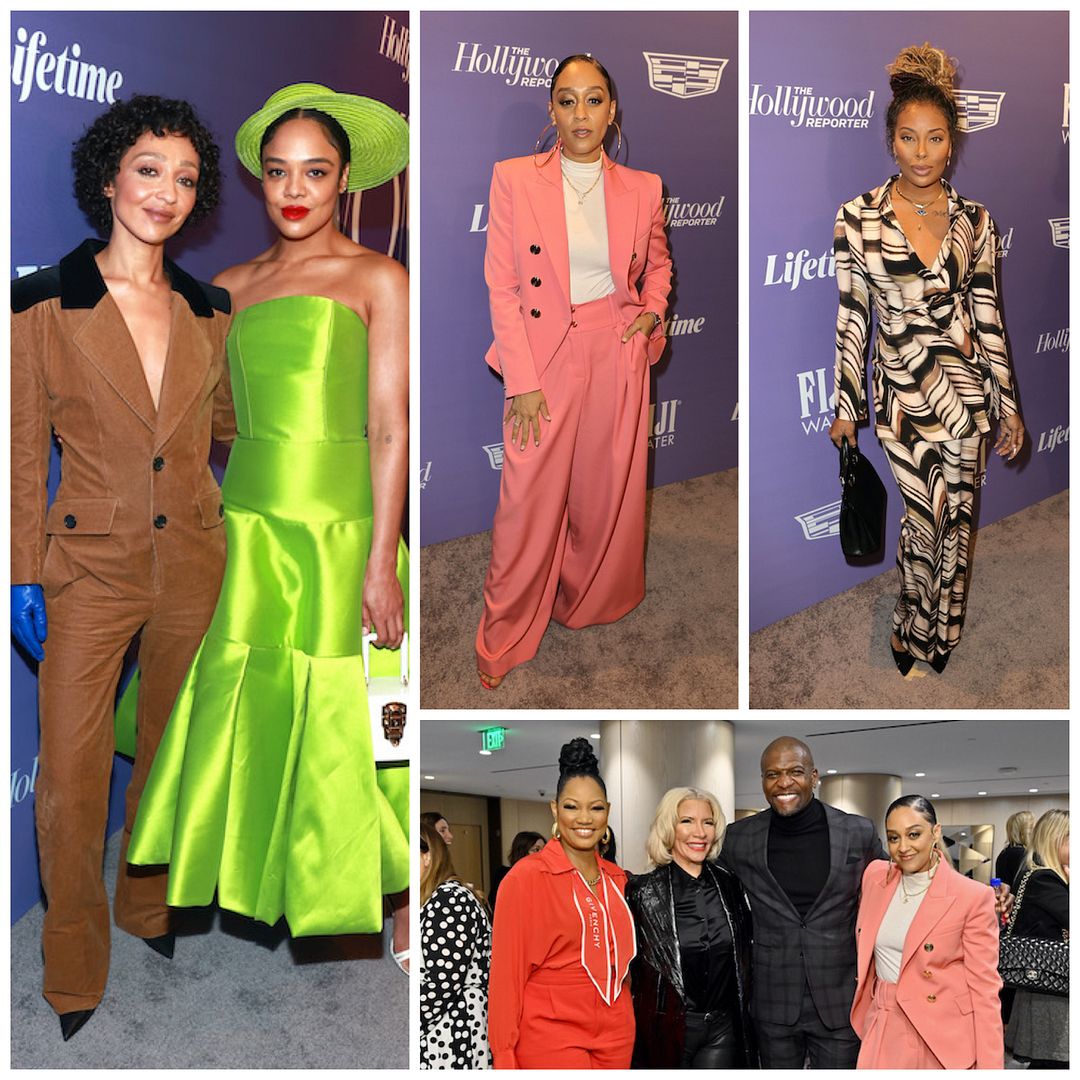 Some interesting looks (and folks) hit the carpet for The Hollywood Reporter’s annual Women in Entertainment event to celebrate trailblazing women in the industry where Pulitzer Prize-winning reporter Nikole Hannah-Jones delivered the keynote speech. More inside… 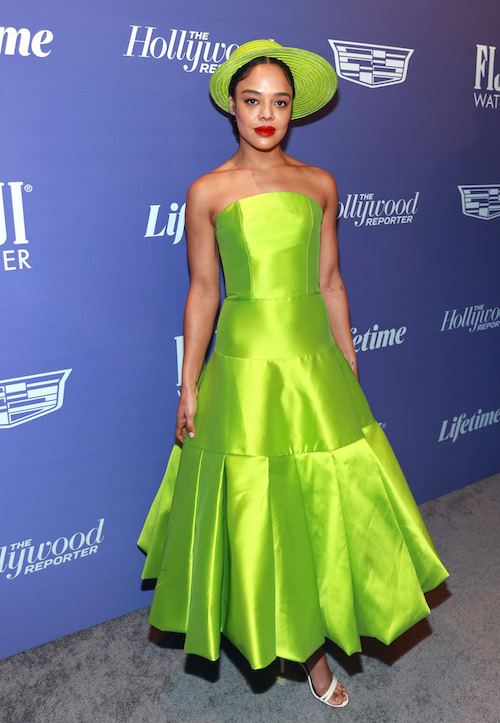 As we make our way into the winter months, most expect to see celebs to slay in a certain aesthetic – dramatic gowns in jewel toned colors – no matter how out of the box. However, fashion has no rules and Tessa Thompson clearly wears what she wants – when she wants because her neon green strapless pleated Christian Siriano gown (from the SS22 RTW collection) with the matching green straw hat and white sandals def gave us summer vibes.

And Tessa’s look wasn’t the only interesting ‘fit to hit the carpet…. 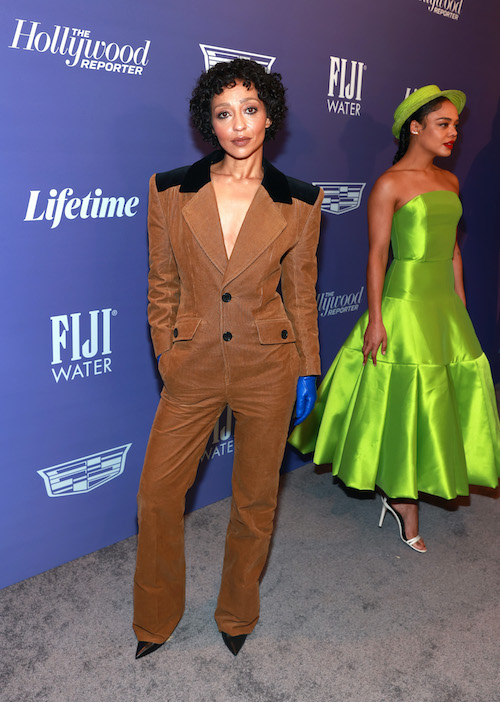 Loving actress Ruth Negga pulled up on the carpet to strike a pose in a brown and black jumpsuit, which she accessorized with electric blue leather gloves. 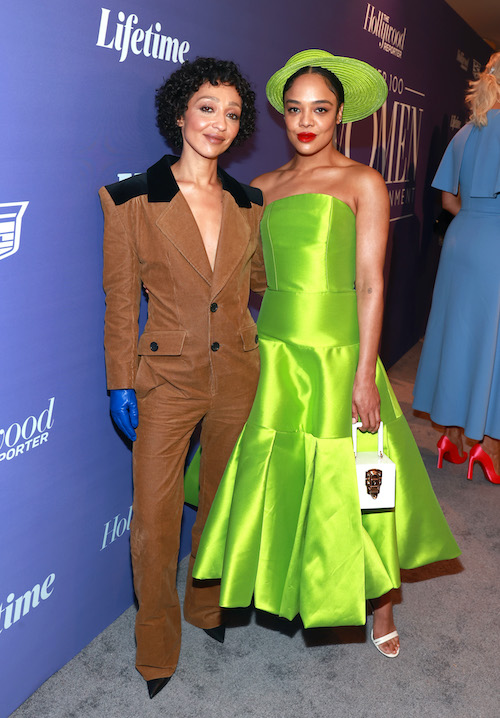 Both looks are quite…interesting to say the least. 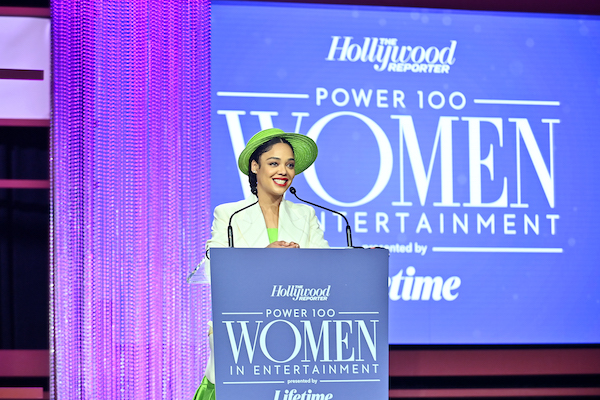 The CREED star presented a scholarship to Chapman University underwritten by The Chuck Lorre Family Foundation to Kennedy High School student, Ashly Galvan Perez. Inspired by the program, Thompson dared the audience, noting “I want to challenge every studio, network, and agency in this room to step up and support these girls. Because someday these girls are going to be on The Hollywood Reporter Power 100 Women in Entertainment list for the work they are doing for you.” 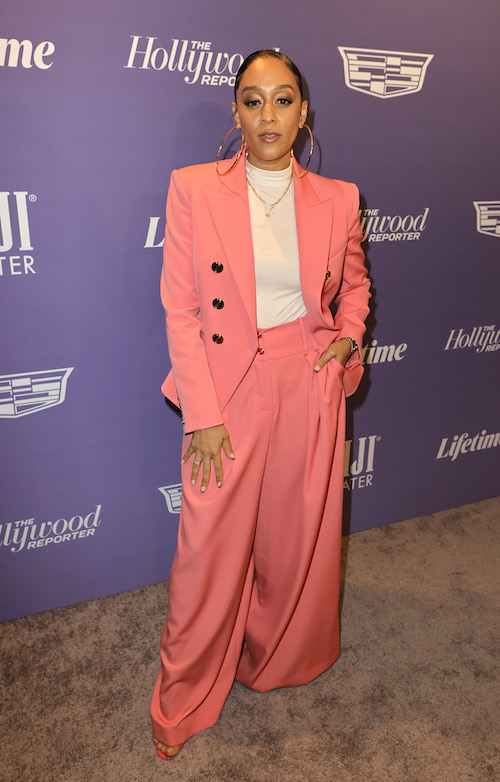 Leaving the kiddies and her hubby at home, ”Sister, Sister” alum/chef Tia Mowry hit the carpet solo in an Easter pink pantsuit that could have used a little tailoring, but she’s still a FAB chick nonetheless.

As for another mom hitting the carpet… 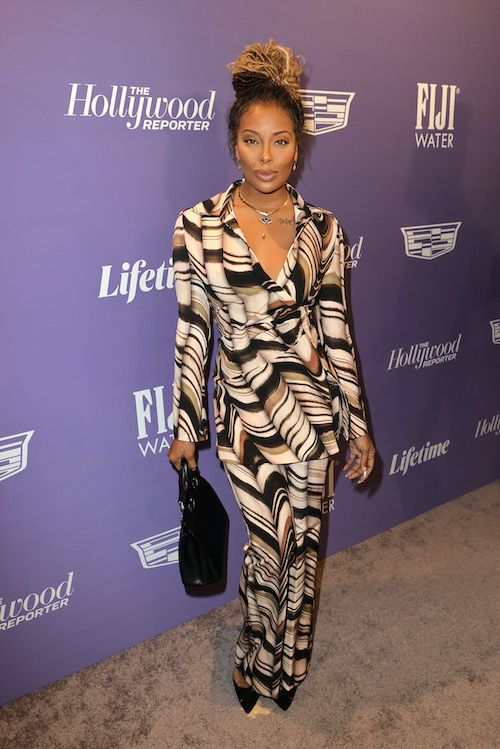 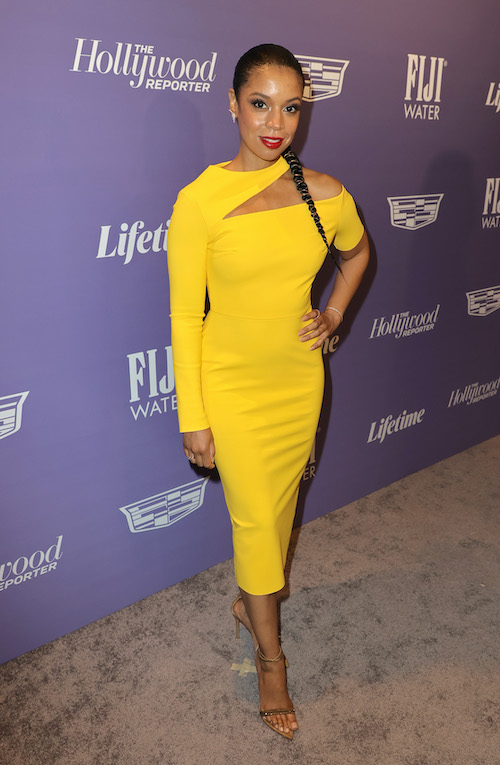 “This Is Us” actress Susan Kelechi Watson was a ray of sunshine in a canary yellow midi dress and gold sandals. 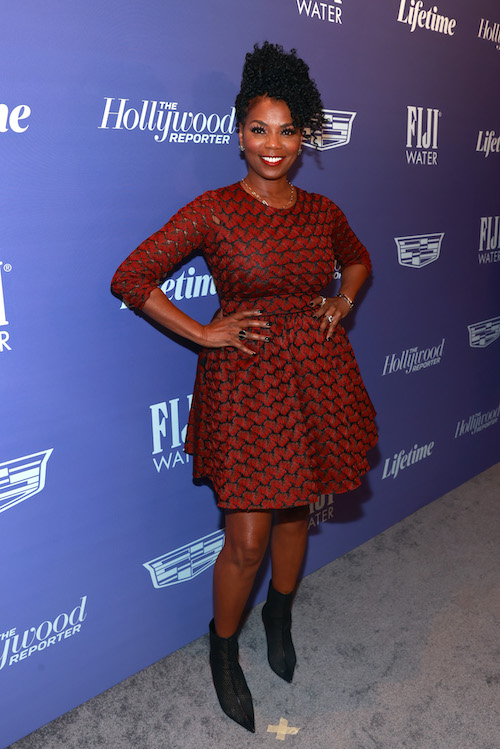 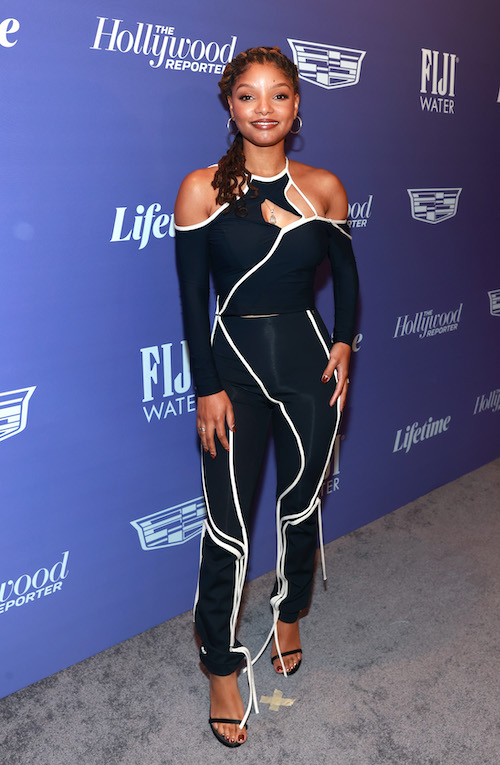 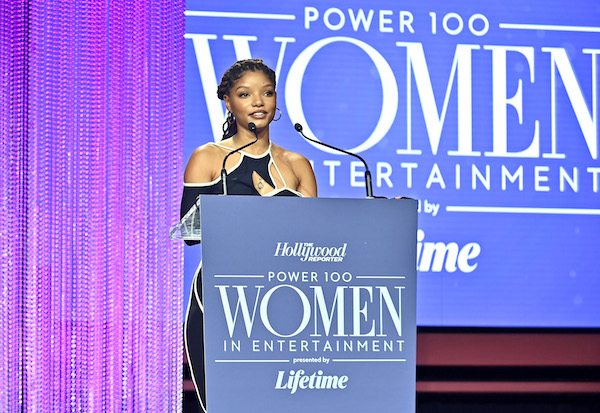 Jennifer Garner led a presentation of scholarships with support from Halle Bailey, Tessa Thompson and Kelsea Ballerini. The “Little Mermaid” actress presented new Apple MacBook Air laptops to each mentee who received scholarships as part of THR’s Women in Entertainment Mentorship Program that were generously provided by the Edie Wasserman Women in Hollywood Fund. 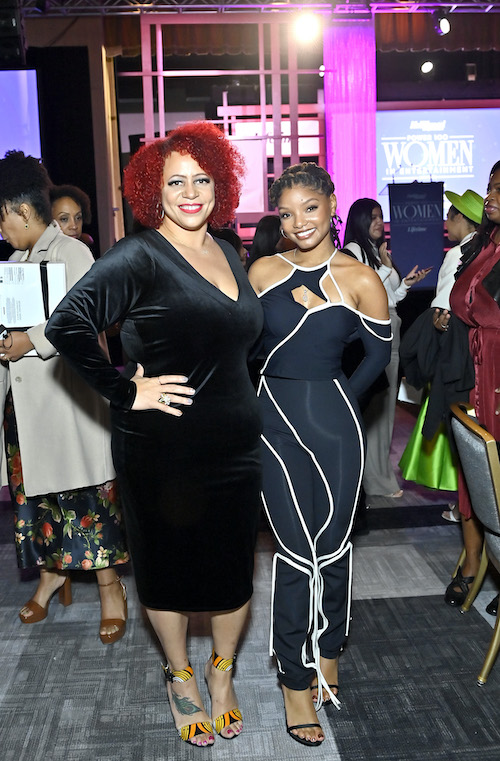 Pulitzer Prize-winning reporter for The New York Times Magazine and creator of The 1619 Project, Nikole Hannah-Jones delivered a keynote speech which echoed the importance of safety and equity for women in the entertainment industry and beyond as well as democracy.

“These anti-history laws want to render us incapable of understanding the causes of the vast inequality that we see in our country,” she said. “They want to limit our society’s understanding of itself and instead indoctrinate our students into learning a history of a country that quite frankly has never existed.”

“I am just a Black girl from Waterloo, Iowa, a no-name town in a flyover state. I certainly never imagined one day I would produce a text so dangerous that it is now being banned by name in states such as Georgia, Texas and Florida,” she continued. “In truth, it is my greatest honor — the Pulitzer Prize means nothing, this is my greatest — because people only ban things they fear will unsettle their power. We cannot sit idly by and concede our power as storytellers and our power as citizens and the power that we collectively hold.” 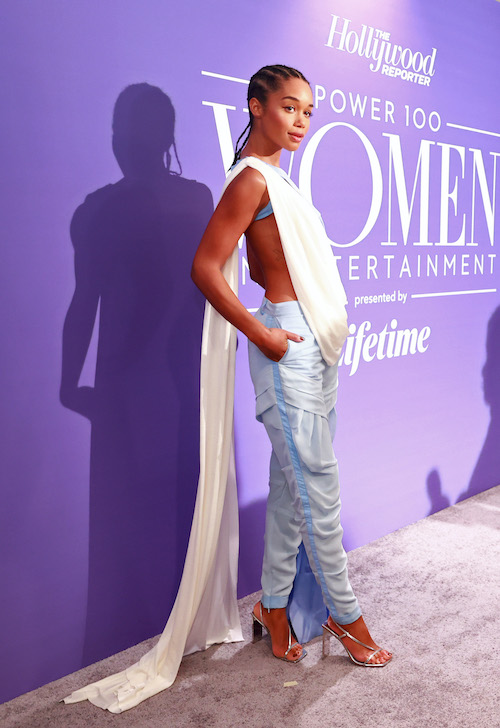 Braided up beauty Laura Harrier served model fabness in a Loewe SS22 RTW look for the event. Do we love it?! 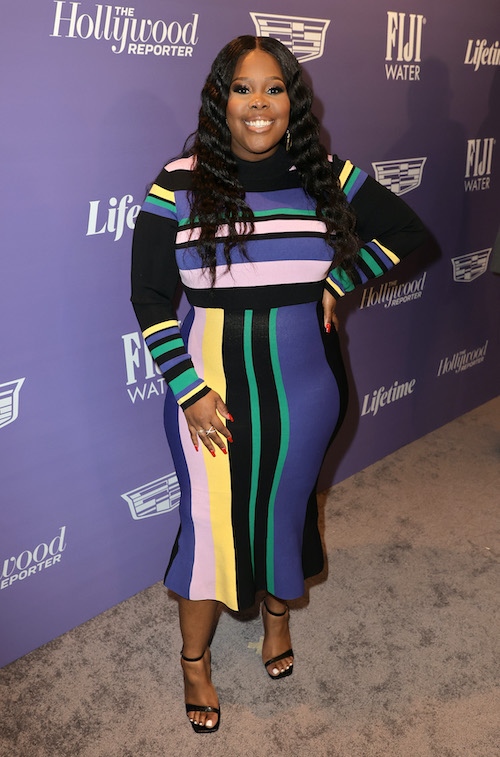 “Glee” alum Amber Riley was all smiles in a hip hugging dress with color blocked stripes. 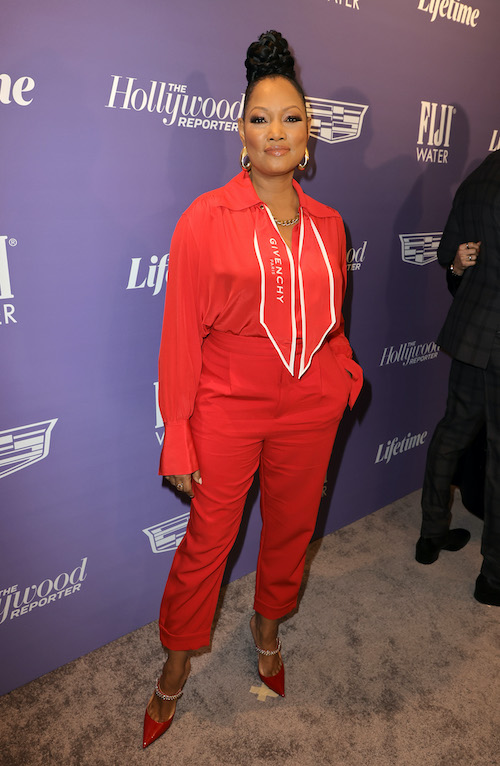 And look who else was there… 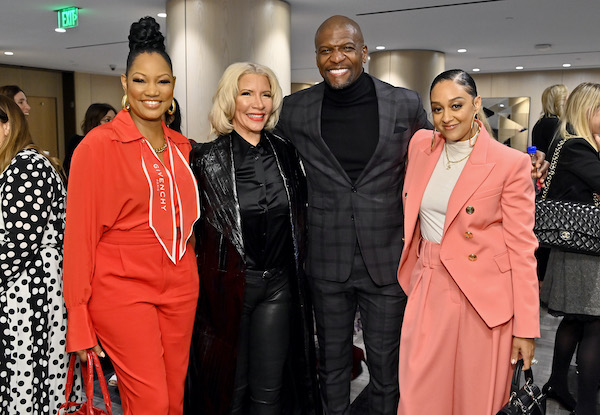 Controversial actor/”America’s Got Talent” host Terry Crews was all up in the mix with his wife Rebecca King-Crews. 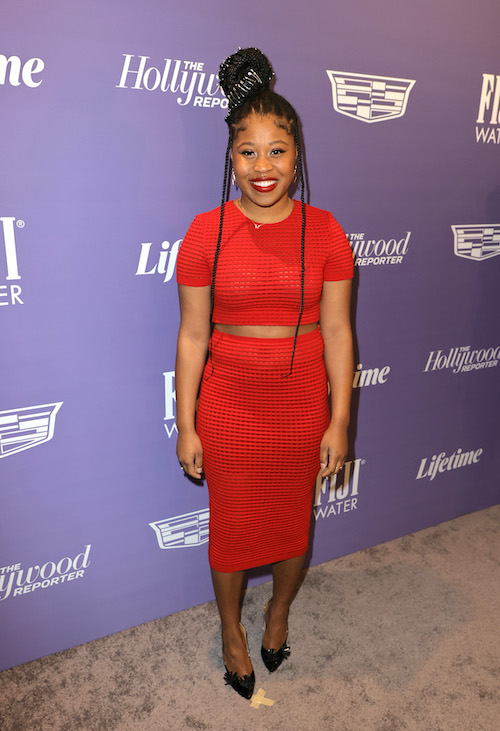 Lady in red! Judas and the Black Messiah actress Dominique Fishback showed off a slither of skin, while keeping it classy. 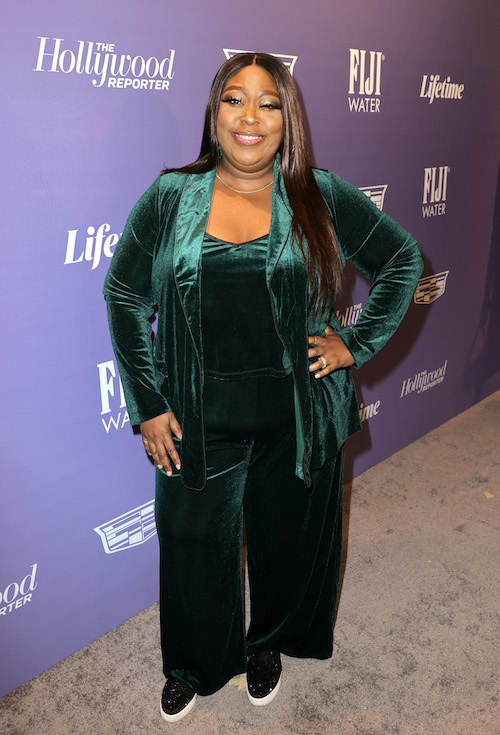 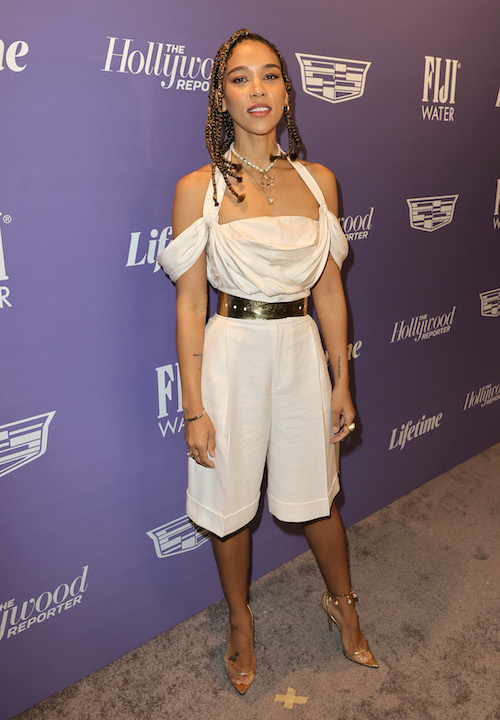 X-Men actress Alexandra Shipp proved you can still wear shorts during the colder months in a Christian Dior number. 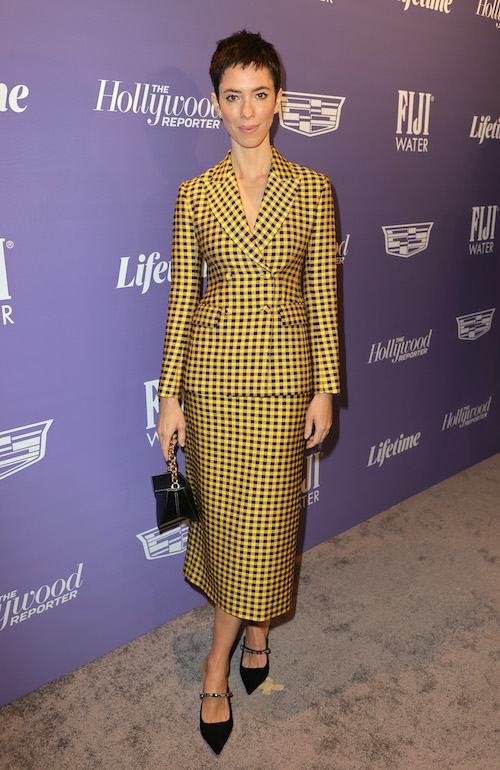 We love a good get together to celebrate women! 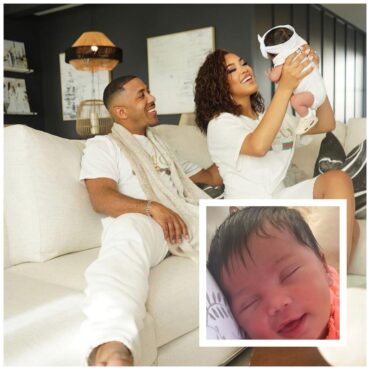 Congratulations are in order for 40-year-old singer/“Sister, Sister” alum Marques Houston and his 20-year-old wife Miya Dickey. They just welcomed a baby girl. More inside….   Marques Houston - 1/3 of boyband Immature - is a dad! The 40-year-old singer/“Sister, Sister” alum and his 30-year-old wife, Miya Dickey, are new parents. On December 2nd, the couple welcomed a daughter, who they named Zara. It’s the couple’s first child. According to […]