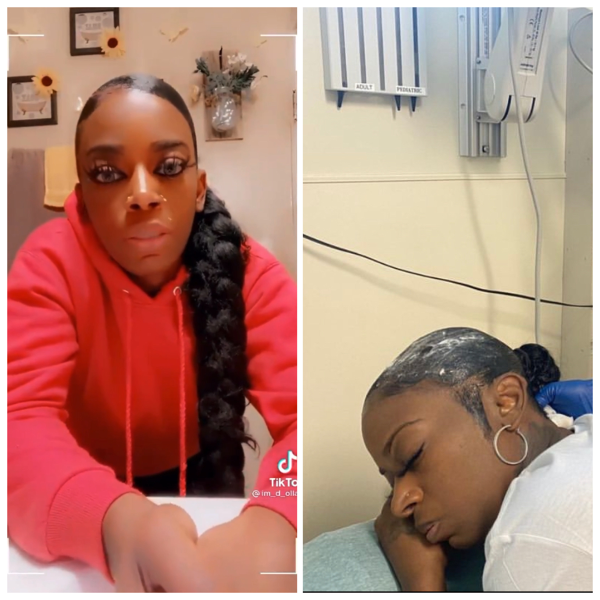 Tessica Brown – dubbed #GorillaGlueGirl – was successful at cutting her ponytail off, but she’s still not out of the woods. Thankfully, a plastic surgeon has offered to help her free of charge, so she’s about to hop on a flight to Beverly Hills to see if he can help. Get the latest inside…

It looks like Tessica Brown is finally making progress.

The 40-year-old Louisiana teacher gained Internet fame when she shared a TikTok video explaining she used Gorilla Glue adhesive spray to lay her ponytail. She has had the same hairstyle for over a month and has been unsuccessful at getting the glue out, but sis is still trying.

Three days after going to the ER, Tessica was able to have her ponytail removed. Thankfully.

Tuesday night, Tessica got off of work started working on hair. You’ll recall, she said the acetone wipes the ER gave her burned her head/scalp, so she had to work on her hair in sessions.

After four hours of working on her head by herself, she called up one of her friends to help her out. The friend was able to work “Goof Off” superglue remover into her hair and was able to make progress. Woot!

Sources told TMZ the friend snapped away at the ponytail with a pair of household scissors before she was able to remove the entire piece. And here’s the result:

“Stiff where?” Gorilla Glue Girls finally gets her ponytail chopped off.. pic.twitter.com/wleCeKi2GA

And here’s video of her friend working on her head:

You can peep more pics here.

When the Gorilla Glue video first went viral, everyone was chiming in with tips (rubbing alcohol, coconut oil, shampoo) she could try to loosen the glue in her hair, but nothing worked. Even medical professionals were chiming with tips in on social media, but her hair didn’t budge.

It’s looking brighter for her now though.

Tessica is about to receive help from Dr. Michael Obeng, who claims he can fix her sticky situation with a lengthy procedure. It’s reported Tessica is set to hop on a plane to Beverly Hills from Louisiana tomorrow to have the special procedure done. It won’t be easy though. The doctor predicts it’ll take 2 – 3 days to get it all out of her hair.

On social media, Tessica thanked everyone who has been showing support and she also called out people who have been saying negative things about her:

To help with treatment, Tessica started a GoFundMe that has raised more than $15,000:

Tessica will not have to dig in these funds for the $12,500 procedure offered by the doctor because he offered to do it for free. The money she did raise would be clutch for her travel expenses, lodging expenses and whatever type of aftercare she’ll need after the procedure.

In an interview with TMZ, Tessica said the money she raised will be spent on wigs for her to wear. For the people who claim she’s clout chasing, she said she would “never do something like this on purpose” and the people who really know her knows that.

The woman who put Gorilla Glue in her hair says “if y’all know me, you would know I would never do something like this on purpose.”

She also explains that the GoFundMe is for wigs after all this is over pic.twitter.com/fDJVNNewK7

Amid the drama, Tessica has reportedly hired an attorney and is weighing on her options to sue Gorilla Glue. When the company got wind of her possibly taking legal action, they released a statement, saying they were “very sorry to hear” about Tessica’s incident and “wished her the best.”

During her interview with KISS 92.5, she admitted to intentionally using the Gorilla Glue spray because she thought she would be able to leave it on for a few hours and then wash it out when she got back home later that day.

We’re not sure how that admission will play out in the court. However, we are hopeful she’ll get through this ordeal.

DaniLeigh has been getting dragged since announcing she broke up with DaBaby. And the dragging had everything to do with her controversial “Yellow Bone” song. Read DaniLeigh's clap backs and what DaBaby’s kid’s mother, MeMe, has to say inside… From controversy about a song dedicated to “yellow bones” to a full blown breakup. Needless to say, DaniLeigh isn't having the best 2021 so far. And from the looks of things, […]