Forever First Lady Michelle Obama drops new gems during an interview with late night talk show host Stephen Colbert where she opens up about her battle with “low grade depression” during the pandemic. More inside…

One thing about our Forever First Lady Michelle Obama – she’s going to bless us with some gems to help us navigate life.

Mrs. Obama recently appeared on the “Late Show with Stephen Colbert” where she opened about her own struggle with depression. Not that we find any joy in Lady O experiencing depression, but it does help to know that she’s going through the same feelings and emotions we’re all going through as we try to figure out our new normal during the COVID-19 pandemic.

Check out A Late Show tonight for my interview with former First Lady and current Michelle Obama, Michelle Obama! pic.twitter.com/r5nV7xC6So

“This is a part of life,” Mrs. Obama said. “Nobody rides life on a high, and I think it’s important for young people to know that you know it’s like, no, you’re not going to feel great all the time.”

Mrs. Obama said she protects her peace by turning off “the noise that is upsetting.” She said she had to stop reading all of the feeds that are fueling her anxiety. And she mentioned she did this while serving as First Lady.

“I pull back from it. I surround myself with things that make me feel good: Family, friends, walks, exercise. So when I talk to my kids about that, I try to urge them to understand that the valleys are temporary and so are the peaks. They can be temporary. And they have to be prepared to handle the highs and the lows,” she said.

The Harvard Law School graduate explained how when she showers and gets dressed for the day, it helped with her having a better mood overall.

“Having a schedule, even in quarantine, was something that I did. I woke up, I took a shower, I worked out, I got dressed every day,” Obama said. “There wasn’t a day that went by that I didn’t do that, because it’s just the doing that gets you out of the funk.

“I find that if I spend the whole day in a sour mood, lights out in the bed, the next day I’ll feel the same way,” she added. “But if I get up and I shower … something might happen in the course of me doing something that really knocks me into a positive place. So I try to fight the tendency to sort of wallow in my low,” she said. “Don’t wallow in your low, Stephen.”

TONIGHT! Former First Lady @MichelleObama shares how she coped with low-grade depression over the past year and how she wants to help people discover the things that bring them calm and peace. #LSSC pic.twitter.com/2pRCpN9M7B

And she’s right. Life will definitely take you through ups and downs where you can learn how to appreciate the highs and how to push through the lows.

Young couples should listen to this wisdom from @MichelleObama on her long-lasting marriage. #LSSC pic.twitter.com/vSgE44JWIM

Our generous queen talked about how she doesn’t have any plans on slowing down on her philanthropic efforts:

The Obamas vs. @StephenAtHome in Wastepaper Basketball

Check out more clips from her interview below: 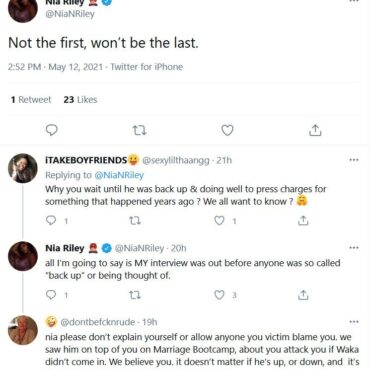 Soulja Boy seemingly responded to sexual battery allegations made against him by an ex. All of the details are pointing to his ex, Nia Riley. And she’s posting up subliminals as well. More inside… Soulja Boy has been accused of sexual battery and has been hit with a lawsuit as a result. In a new civil suit, an unidentified woman – Jane Doe – claims she was involved with the […]