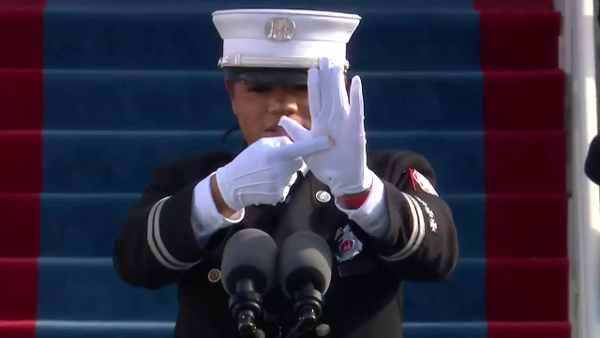 Georgia Fire Captain Andrea Hall – the first Black woman to serve as fire captain for the South Fulton County Fire Rescue – led the Pledge of Allegiance at Biden-Harris’ inauguration in sign language, leaving folks wanting to know more about her. Peep reactions to her presentation inside…

Before poet Amanda Gorman made history, another real-life YBFer hit the stage for a presentation at the U.S. Capitol. Fire Captain Andrea Hall – the first Black woman to serve as fire captain for the South Fulton Fire Department – led the Pledge of Allegiance in speech and in American Sign Language (ASL). And it’s likely the first time the Pledge was recited simultaneously in voice and ASL at a U.S. Inauguration.

Folks got emotional after seeing her lead the pledge in ASL:

I just got emotional seeing sign language being used at the #Inauguration during the Pledge. Seeing Kamala Harris sworn in made me let out a breath I’ve been holding in for four years. Things aren’t better yet, but for the first time in a long time, I have hope that they will be.

Same! Our whole family is watching and starting losing it at the beautiful Black military woman reciting the pledge of allegiance while simultaneously doing it in #signlanguage

The Pledge of Allegiance in American Sign Language is really moving. Notable that the sign for “America” is made by interlocking your fingers and then move your hands in an inclusive circle.
May we continue to live into that ideal.

If you don’t understand why ASL users are happy rn, ask yourself if you ever saw a sign language interpreter at an official White House in the last 4 years.

Even at COVID briefings they were denied access to what could have been life-saving info. https://t.co/SOLZnlJAjy

Now, everyone wants to know everything about her.  Here’s what we know:

In 2004, Andrea became the first Black female Fire Captain in the history of the City of South Fulton Fire Rescue Department in Georgia.

IT’S INAUGURATION EVE! Our city’s very own Fire Captain Andrea Hall will represent us in Washington, D.C. when she delivers the pledge of allegiance at the Biden-Harris Inauguration ceremony tomorrow. Watch on all major networks tomorrow morning beginning at approximately 10am. pic.twitter.com/6u8OW2A2JA

The 47-year-old is also the local chapter president of the International Association of Firefighters Local 3920 in Georgia. She has dedicated 28 years of her life in service as a firefighter beginning her career in 1993 in Albany, Georgia. She was the city’s first female firefighter before joining South Fulton in 1999.

Now, she’s representing for her people on the big stage.

“Everything it expresses, I want to embody that in that moment,” she told CNN. “And just making sure that I am representing my family, my professional family here in South Fulton, representing the nation, and making sure that they understand the passion from which I speak those words about being indivisible as a nation…because that’s what it’s going to take to move our country forward.”

“This is really about the firefighters and the frontline workers who represent our industry in this country. It is about Fulton and the people who I represent here in the community of people that we serve,” Hall said. “It’s really about us being on the precipice of moving our country forward to a more united place,” she continued.

She was also inspired to learn “Black Sign Language” because of her father and uncle. According to the Georgia School for the Deaf, Captain Hall learned BASL (Black ASL) from her father, who attended the school. Captain Hall’s father, Russell “Bubba” Williams, attended GSD at the Gordon Campus during the 1960s. Andrea’s cousin, Lannie Williams, also attended GSD.

Georgia School for the Deaf Alumni Association wishes to express our sincere appreciation to Captain Andrea M. Hall who…

Posted by Georgia School for the Deaf Alumni Association on Wednesday, January 20, 2021

We LOVE to see it! 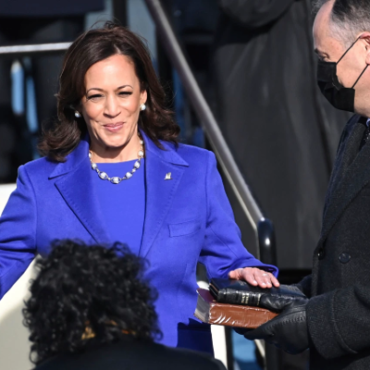 VOGUE heard what you all said about Vice President Kamala Harris’ cover, so they’re trying to make it right. The fashion bible will publish an alternate cover of its February issue with the image of Kamala everyone loved after receiving backlash for the original. More inside…           View this post on Instagram                       A post shared […]