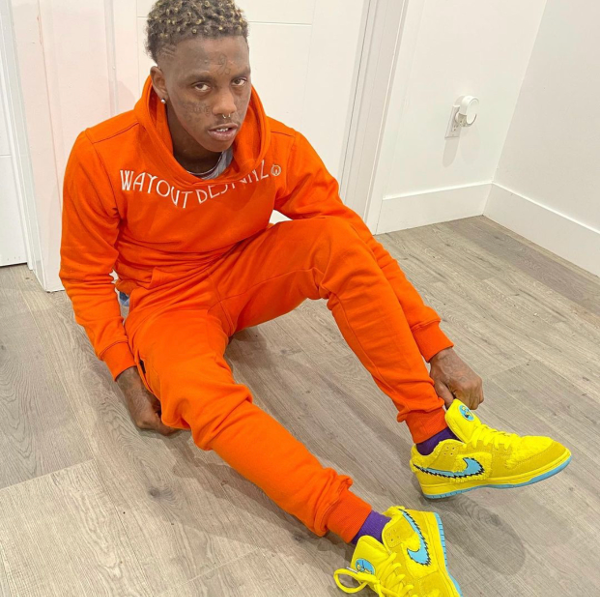 Rapper Famous Dex dropped a snippet of a new track and his fans HATE it. He released the snippet right after he was hit with 19 charges that include gun possession and domestic violence! More inside…

Famous Dex is seemingly spiraling out of control, which in turn is having a negative affect on his music, and his fans aren’t here for it.

After getting hit with 19 criminal charges, Famous Dex (signed to 300 Entertainment) released a snippet of a new song for his fans on his Instagram account. However, they aren’t feeling it all. In fact, most of the commenters in the post have been begging him NOT to drop the track. Damn. Some fans blame his alleged use of drugs on why his music hasn’t been up to par. Many of them complained they couldn’t understand a word he was saying and also encouraged him to seek help.

”What are you even saying?” one commenter asked.

”Keep this bruh tf is this?? This almost disrespectful,” one fan wrote.

”Did the whole song on Xanax. Can y’all hear it in his voice….,” one user wrote.

”Do not drop this please,” one fan begged.

The Chicago rapper (real name Dexter Tiewon Gore Jr.) has found himself in a world of legal trouble.

The “Pick It Up” rapper was reportedly hit with 19 charges, including gun possession and domestic violence, stemming from THREE separate incidents. Sheesh. The domestic violence charges stem from alleged physical altercations involving ex-girlfriends.

Two of the allegedly violent altercations involved the rapper’s ex-girlfriends. Back in November, cops say they responded to a domestic disturbance call at his home and found a woman with cuts on her. As we reported at the time, this led to a SWAT standoff — police suspected Dex barricaded himself inside with guns … after allegedly harming his ex.

For that incident, he’s been charged with domestic violence, weapon possession, dissuading a victim from reporting a crime and defacing property.

It doesn’t end there … Dex allegedly got physical with a different woman back in October, and he’s being charged with corporal injury domestic violence, threatening a domestic partner, exhibiting a firearm, inflicting bodily injury, dissuading a victim from reporting a crime, defacing property and illegal possession of a firearm.

Finally, there’s the story we broke earlier this month … when he was arrested for a loaded gun, cops claim they found under his seat during a traffic stop. Prosecutors now say he was prohibited from possessing a firearm due to a restraining order, so they charged him for that plus possession of a firearm without a serial number.

The City Attorney’s Office tells us Dex is facing up to 18 years behind bars if you add up potential punishments for all the charges, although we’re told some counts may merge as the case develops.

On top of his legal troubles … Dex claims he was the victim of an armed robbery earlier this month in the San Fernando Valley. He told cops the robbers made off with thousands in cash and a $50,000 watch.

Back in November, rapper NLE Choppa (who has adopted a new, healthier lifestyle) tweeted Famous Dex’s label needed to get him HELP:

I’ve never been the type to be in folks business but @300 y’all see @FamousDex obviously on drugs too heavy can y’all at least try surrounding that man around somebody with his best interest. Help dude out, or somebody who already is in his ear uplift dude he NEEDING it

”I’ve never been the type to be in folks business but @300 y’all see @FamousDex obviously on drugs too heavy can y’all at least try surrounding that man around somebody with his best interest. Help dude out, or somebody who already is in his ear uplift dude he NEEDING it”

When other rappers are publicly calling it out then…

There were several shootings that happened in Virginia Beach over the weekend, claiming the lives of Pharrell Williams’ cousin, Donovon Lynch, and “Bad Girls Club” star Deshayla Harris. Details inside… A series of shootings along Virginia Beach's oceanfront made for a deadly and chaotic weekend on the east coast. Superproducer Pharrell Williams is mourning the death of his 25-year-old cousin, Donovon Lynch, after he was reportedly gunned down by police. He was one of two people killed in THREE separate […]