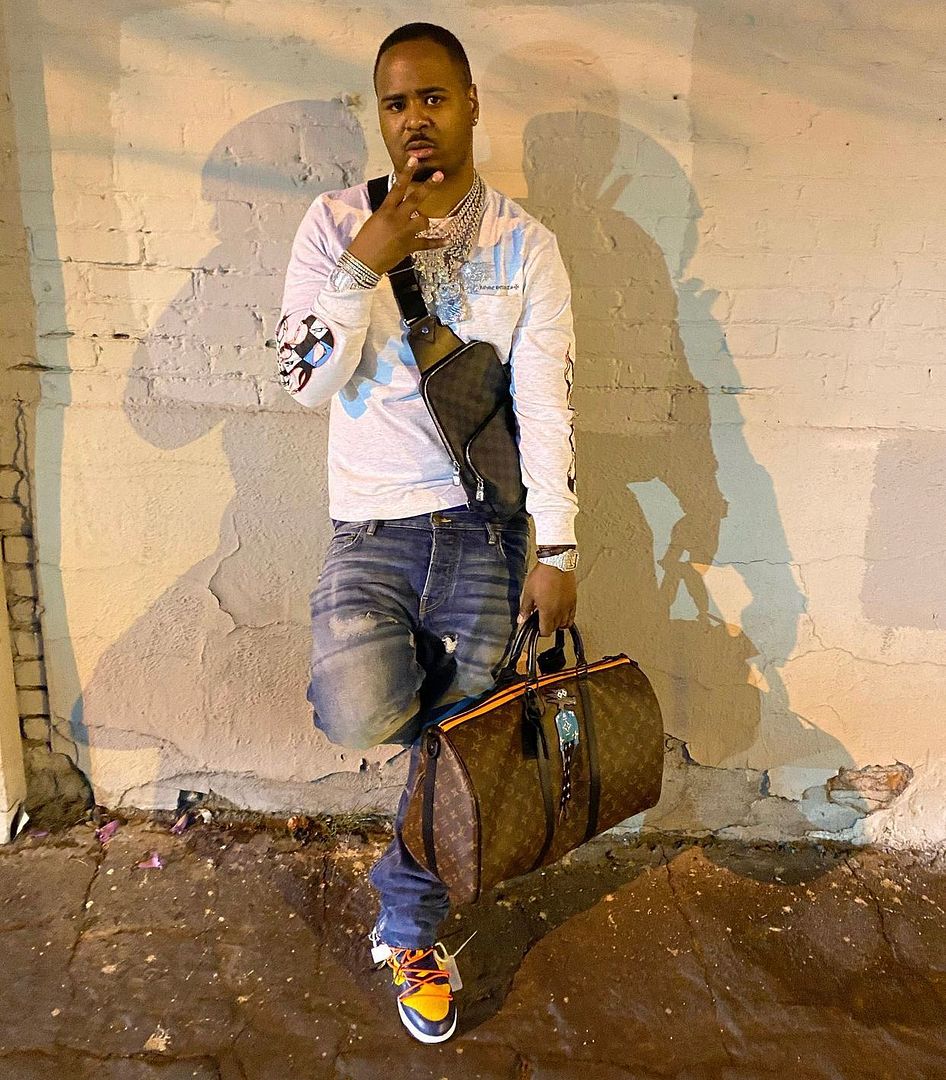 Hip Hop is mourning another rapper killed at the hands of unnecessary violence. West coast rapper Drakeo The Ruler was fatally stabbed backstage at a music festival in Los Angeles where he was scheduled to perform.

Drake, Snoop Dogg, Saweetie and more posted tributes after learning about his death. Deets inside…

R.I.P tributes are pouring in as Hip Hop mourns the death of another rapper who was killed by unnecessary violence.

According to reports, west coast rapper Drakeo The Ruler (real name Darrell Caldwell) was fatally stabbed in the neck after being attacked by a group of people backstage at the Once Upon A Time music festival at the Exposition Park in Los Angeles Saturday night. Ultimately, Drakeo died from his injuries. He was 28.

Headliners for the festival included 50 Cent, Snoop Dogg, and YG. Drakeo was also set to perform, however, that never happened.

“I can confirm his passing but am in shock and unable to share any further details at this time. I’ll be releasing a statement from his family as soon as we’re able,” he said.

The festival was shut down right after the incident.

A post shared by Once Upon A Time in LA (@onceuponatimeinlafest)

“The Once Upon A Time In LA Fest is ending early. All performances are now over. Please head to the closest exit and head eastbound on MLK,” organizers wrote.

According to reports, a fight broke out backstage that ultimately resulted in Drakeo The Ruler being stabbed to death. CNN reports:

Police said a fight broke out shortly after 8:30 p.m. backstage at the Once Upon a Time in LA festival, an event held near the Banc of California Stadium and Los Angeles Memorial Coliseum in Exposition Park. The event featured Drakeo the Ruler alongside hip-hop legends Snoop Dogg, Ice Cube and 50 Cent. Drakeo the Ruler was scheduled to perform at 8:30 p.m..

”During the altercation, one man was severely injured by a suspect wielding an edged weapon. Officers from the California Highway Patrol (CHP), Los Angeles Police Department (LAPD), and Los Angeles Fire Department (LAFD) responded to the scene. The victim was transported to a local area hospital where he succumbed to his injuries,” CHP said in a statement.

Concert promoter Live Nation, which along with Snoop Dogg organized the event, decided to end the concert early following the incident.

Below is allegedly footage of the altercation that led up to Drakeo’s demise:

Footage of altercation, leading to #Drakeo getting stabbed pic.twitter.com/rsIe8vuAAz

There’s also a video of Drakeo right after he was stabbed ﻿ circulating on social media, but we are not posting it here out of respect for his family, friends and fans. 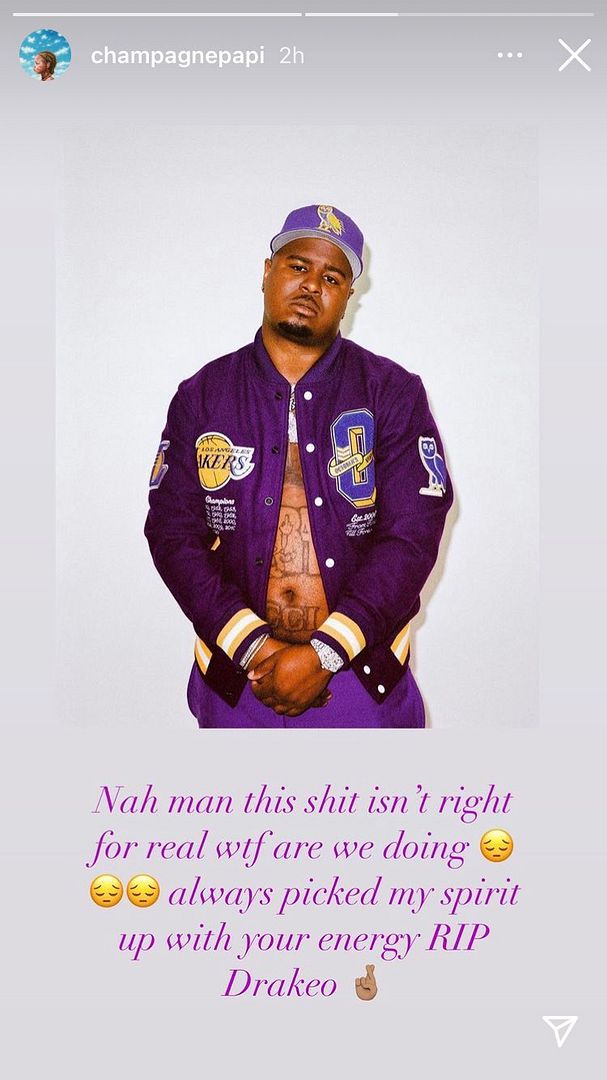 Headliner Snoop Dogg sent out his condolences to his family and friends. 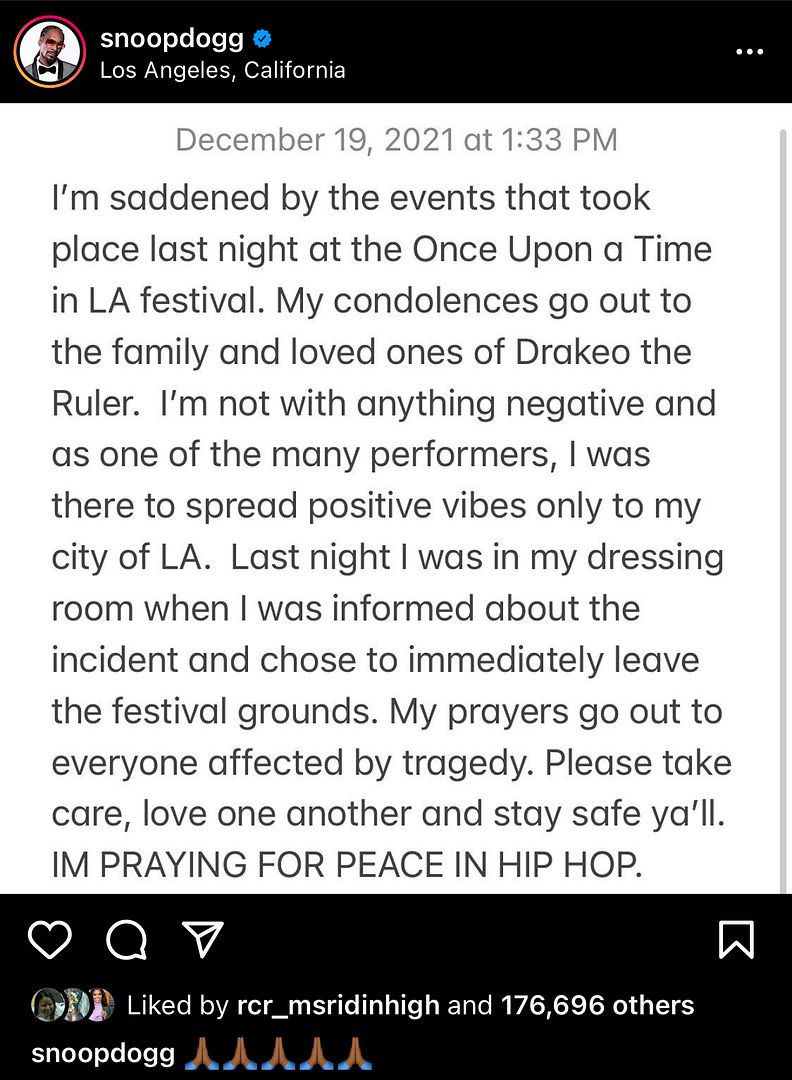 “I’m saddened by the events that took place last night at the Once Upon a Time in LA festival,” Snoop wrote on IG. “My condolences go out to the family and loved ones of Drakeo the Ruler. “I’m not with anything negative and as one of the many performers, I was there to spread positive vibes only to my city of LA.” 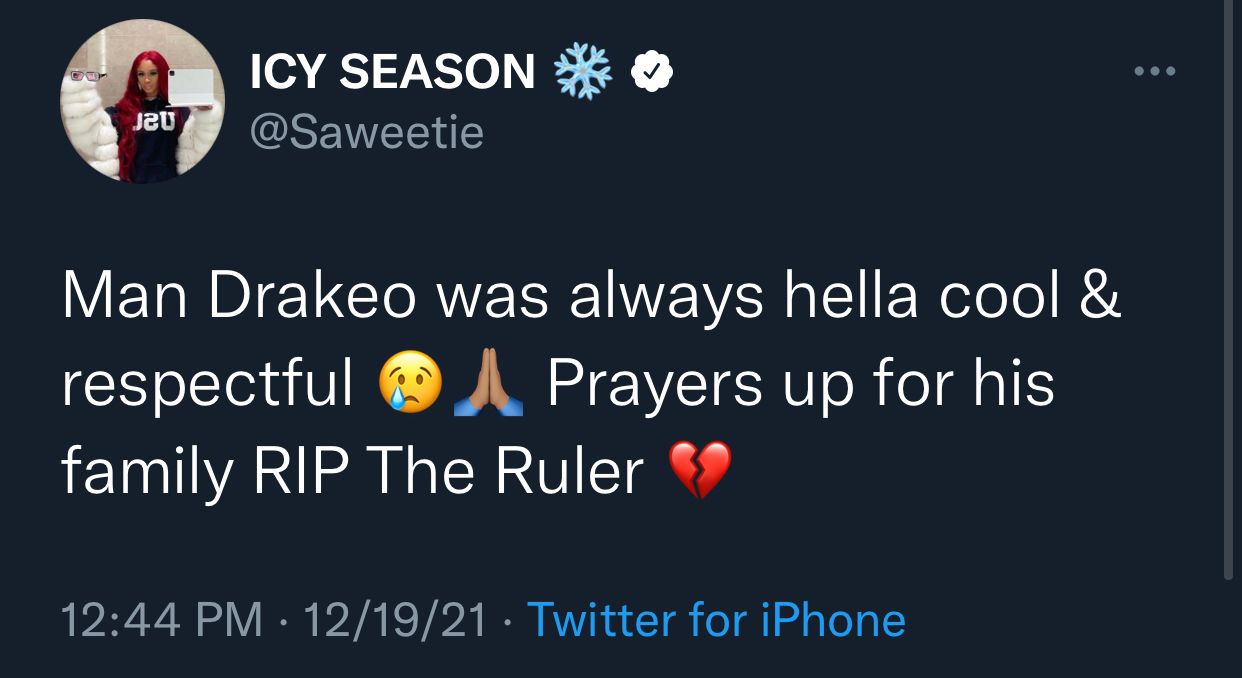 ”Man Drakeo was always hella cool & respectful Prayers up for his family RIP The Ruler,” Saweetie tweeted. The ICY GRL worked with the rapper on her track “Risky,” which is featured on her EP, Pretty Summer Playlist: Season 1.

Rest in Peace, Drakeo. Your legacy will live on forever. pic.twitter.com/nb1THxJvIY

As enternainers lets try some shit next year. Minding our own business. Not dis respecting each others family, dead homies, or area they come from. Stop using someone else’s significant other as a one up to the other person. Actually showing the same love you expect to get

Sadly, Drakeo was killed the night before his girlfriend’s birthday. His girlfriend, who goes by Noel Bianca on social media, posted up a series of posts in reaction to the death of her partner.

”Darrell you knew everything about me and still loved me,” she wrote. “I will miss our drunk nights, our arguments over nothing, u singing Sam Smith to me in the car, holding my hand 24/7, massaging my feet, staring at me while I’m sleeping. This loss is unbearable.”

”I will follow you anywhere you lead me. Even if the path is painful to get thru. I know you will be by my side baby,” she wrote in another post.

Word on the curb is that rapper YG allegedly “set Drakeo up” and there are threats that YG can longer perform in Los Angeles. Peep the clip below:

Sighs. When does it end?

The senseless violence has to STOP! So many rappers dying because of violence – Nipsey Hussle, Pop Smoke, King Von, Young Dolph and more – and didn’t have to. 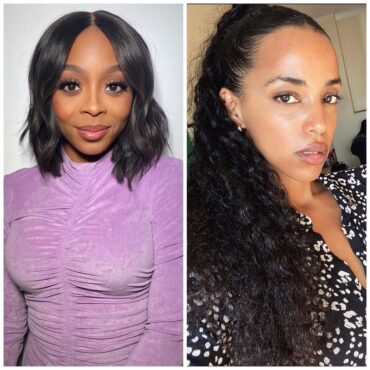 Bresha Webb & Getenesh Berhe - leading ladies on OWN’s new holiday film, Song & Story: Amazing Grace, dishes to TheYBF.com about their new roles and why second chances are important, how late rapper DMX provides daily motivation and KiKi it up about the holiday cooking struggles. Get into our chat inside… Just in the time for the holidays, comes an uplifting story of women on the spiritual journeys to […]