Drake made sure to celebrate his Artist of the Decade Billboard Music Award with an epic dinner surrounded by his closest friends. Also, Drizzy had the Internet in a frenzy when a picture of him all boo’d up with a woman who resembles his son’s mother popped up online. It didn’t take the internet long to find out who she is.

Get the deets inside…

When you’re crowned as the Artist of the Decade by Billboard, it’s only right to celebrate in an epic way. And that’s exactly what Drake did.

Last Sunday, Champagne Papi had the new SoFi Stadium in Inglewood, California shut down so he and his friends could enjoy a dinner on the 50-yard line.

”Never show anger at slight,” Drizzy captioned a picture of himself and his homies on the field. “Tell nothing. Earn respect from everyone by deeds, not words. Respect the members of your blood family. Gambling is recreation, not a way to earn a living. Love your father, your mother, your sister, think harder about who you call your brothers and beware of loving any woman other than your wife..”

We didn’t see any flicks of Drizzy’s 3-year-old son Adonis, whom he brought with him on stage to accept the award. Looks like this was a grown-up, Styrofoam cup type affair to celebrate his huge accomplishment.

The private party was LIT (literally) as the dinner included a light show and more.

“There are huge champagne towers and several bars set up throughout the stadium,” a source told E! “Drake also has cute album books featuring his favorite moments through his career set up around the stadium.”

Although he earned Artist of the Decade status, Drizzy is still putting in work in the studio. He’s currently working on his forthcoming album Certified Lover Boy and he teased a song – reportedly titled “Fair Trade” – in a recent IG video with producer 40 working the boards:

In other Drizzy news…

Yesterday, the Internet was going nuts after a picture of Drake and a mystery woman looking very much like a couple popped up on social media. It appears the woman attended his private stadium celebration.

In the flick, the “God’s Plan” rapper is standing behind a woman with his hands on her waist as she snaps a selfie in a mirror.

Turns out, the woman in the picture with Drake is his personal stylist, Luisa Duran. In the caption of their prom-like coupledom flick that she posted on her private IG account, she wrote, “’Congratulations on artist of the decade. It’s been so amazing working with you these last 10 years. You are truly like a brother to me.”

Brothers don’t usually pose with their sisters like this, but maybe this is their dynamic.

It’s giving COUPLEDOM vibes and the chick looks A LOT like his son’s mother, Sophie Brussaux. Here’s a flick of Sophie below in yellow: 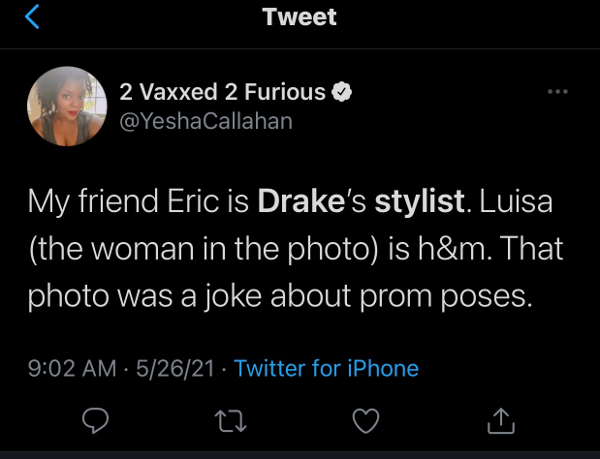 A Twitter user claims the coupledom flick with Drake and Luisa was a “joke about prom poses.” 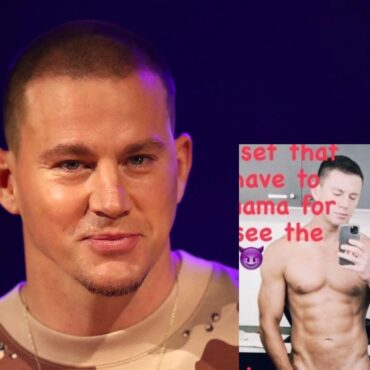 Oh My: Channing Tatum Gets Naked on Instagram for ‘The Lost City of D’ [Photo]

Channing Tatum wants you to know he’s 41-years-old and still hot. The actor took to his Instagram Story on Tuesday to share a photo of himself posing nude while in his trailer as he works on his upcoming movie The Lost City of D. “You know when you in the make-up trailer a–hole naked holding a towel over your junk you about to do some s–t on set that you gonna […]