Desiree Lindstrom – DMX’s fiancée – is mourning the death of her soulmate, DMX, following his memorial services that took place over the weekend. During the public ceremony, X’s ex-wife Tashera Simmons shared a special moment with Desiree that had everyone’s eyes filled with tears. Also, Kanye West has raised $1 million for X’s 15 children.

DMX’s loved ones are still coming to terms with his sudden death, which is totally understandable. The 50-year-old rapper died at White Plains Hospital in New York on April 9th, one week after suffering a heart attack which was reportedly brought on by a drug overdose.

X’s fiancée, Desiree Lindstrom, is continuing to mourn the death of her late fiancé, rapper DMX, which she has been doing since he passed.

On Tuesday (two days after his memorial), Desiree wrote out how she’s feeling on her IG Stories, sharing how she terribly misses X and asked God to give her strength during this time.

”Dear Heavenly Father, I come to you because I am so weak right now. I pray for the strength lord Jesus! Loosing [sp] a loved one, has been by far the hardest thing ever in my life! I’m so lost without my soulmate, I’m so lost without my son’s father!,” she wrote. “I just pray God, that you continue to life me and my son up! For this one is so hard for me!”

Check out more of her social media tributes to the Ruff Ryderz legend below:

Desiree – who is the mother of X’s 4-year-old son Exodus – also shared assured her son his father is always with him:

The mother of X’s twins – who are about 1 – also posted a tribute to her kids father on social media:

Over the weekend, a public memorial service for the Grammy nominated rapper was held at the Barclays Center in Brooklyn, New York.

The memorial service for the late DMX was limited to friends and family due to COVID-19 restrictions, but the memorial was broadcast live online via X’s YouTube channel. Hundreds of motorcyclists rolled through downtown Brooklyn leading up to the memorial, which was led by a Ruff Ryders monster truck carrying DMX’s coffin.

DMX – real name Earl Simmons – and Tashera Simmons were married for 11 years and have four children together. They met when they were 18 years-old and even then she was astounded by his spirituality.

During the ceremony, X’s ex-wife Tashera Simmons paid tribute to the late rapper and made sure to show love to his current fiancee Desiree, which made for a special moment:

This moment between DMX’s ex-wife Tashera and his fiancée Desiree was really, really special #BETRemembersDMX pic.twitter.com/zrG76UauOJ

Watch their performance below:

During a break between performances, the late rapper’s children took the stage to share remarks about their dad. One of his daughter’s performed a rap tribute dedicated to her father. Check it:

DMX’s daughter wrote a song for her dad pic.twitter.com/JtSdc4j5Zo

Superproducer Swizz Beatz dropped some gems and even stepped on some toes while speaking about his brother.

“I just wish all these people showed up for him when he was here,” the “Ruff Ryders’ Anthem” producer said. “He needed everybody when he was here, we got to learn to celebrate each other while we’re here.”

Swizz Beatz reflects on the passing of DMX at his memorial at the Barclays Center pic.twitter.com/f16fPAWAJM

Also, Ye is raising money to help out X’s 15 kids after commissioning a DMX t-shirt designed by Balenciaga. TMZ reports:

Sources close to Kanye tell us the custom DMX T-shirt designed by Balenciaga — which was commissioned by the Yeezy brand and put up for sale Saturday as X’s memorial got underway — ended up cranking out huge profits quickly … upwards of a million bucks.

Balenciaga had already said they’d be giving the net profits back to the fam — but the fact those sales produced a million dollars is staggering. Then again, the shirt was retailing for $200 a pop … so we suppose it makes sense. The DMX tribute shirt sold out in 24 hours.  There’s another way Kanye got involved in Saturday’s ceremony — which Swizz Beatz actually alluded to during the event. Yes, we’ve heard Kanye and the Yeezy team did, in fact, design the stage where the Sunday Service choir performed, and where guests also spoke.

You can watch the public memorial service that aired on BET below:

December 18th has been declared as “DMX Day” by the New York State Senate. 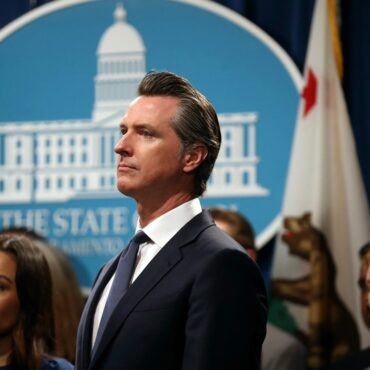 A campaign effort to recall California Gov. Gavin Newsom became official last Monday.  What We Know: Critics of Gov. Newsom have met the state’s threshold with 1.6 million validated signatures to force a recall election of the Democratic governor this year. Grassroots organizers needed 1.5 million people to back the recall election, which likely won’t occur until sometime between this summer or as late as December. The announcement was delivered from […]