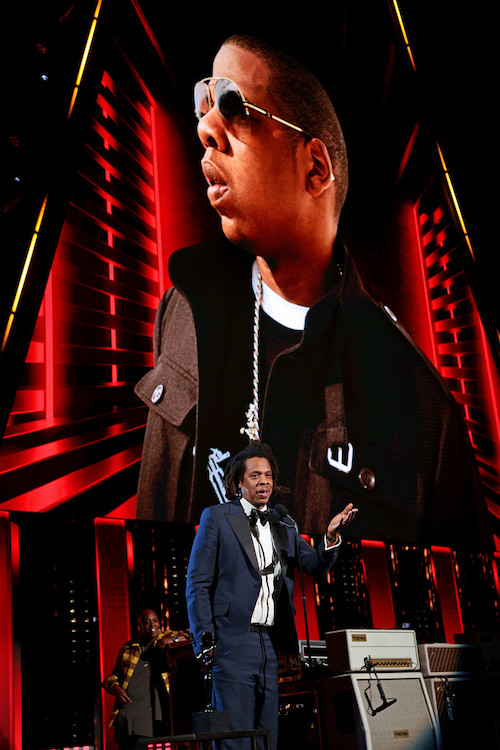 Of course, heavyhitters like Dave Chappelle and Barack Obama were chosen to induct Jay-Z into the Rock & Roll Hall of Fame Class of 2021. Watch Hov get his flowers, plus peep the shoutout he gave his former business partner Dame Dash inside… 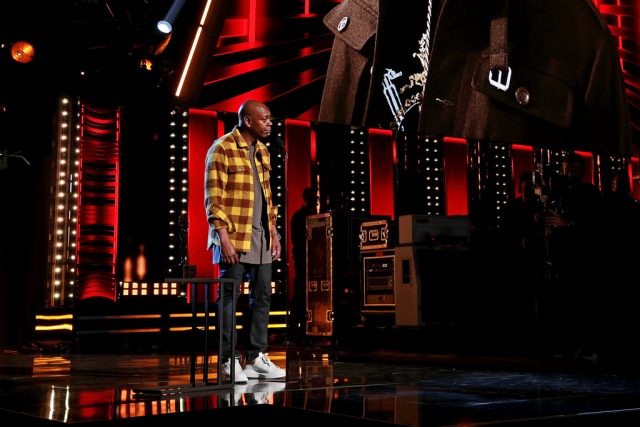 “He is ours. He is Hip-Hop. Forever,” and ever, and a day. Dave Chappelle said as he honored Jay-Z at the 2021 Rock & Roll Hall of Fame ceremony in Cleveland, Ohio. 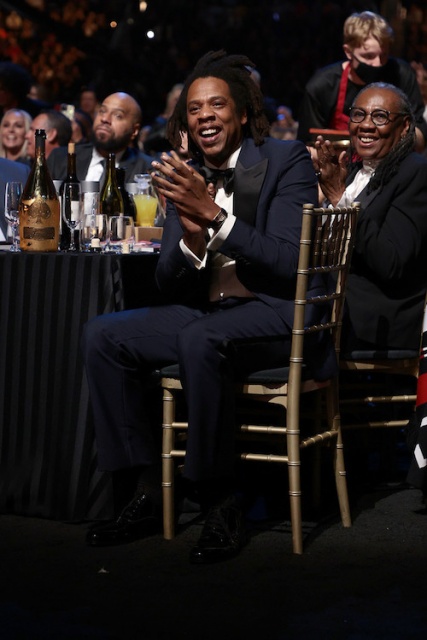 “I would like to apologize to…Nah, I’m just f*ckin’ with ya,” Dave joked, seemingly poking fun at the “cancel” drama surrounding him over jokes he made in his Netflix special “The Closer,” which pissed off the trans community.

“He is going to show us how far we can go if we can just get ahold of the opportunity,” Ohio native Dave Chappelle said about Jay-Z Saturday at the Rock Hall induction. “He has his people’s heart…We love him more than you can ever recognize him for.” https://t.co/2mYvPgtHwT pic.twitter.com/PscTPbxkIk

“I need everybody in rock and roll to know, that even though you are honoring him, he is ours,” Chappelle continued. “You embody Black excellence,” Chappelle said to Hov. 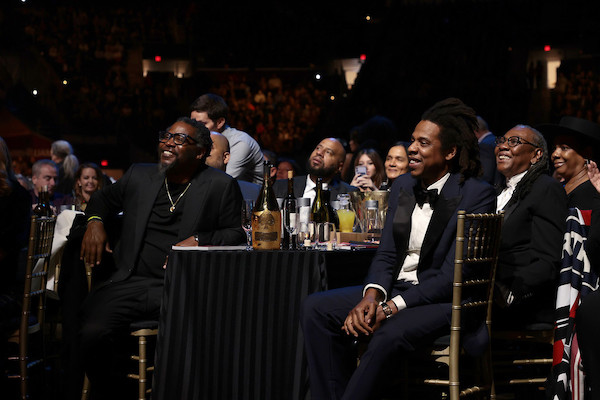 The famed comedian gave a profound speech, sharing how much of an impact he has been to the culture.

“He is going to show us how far we can go if we can just get ahold of the opportunity,” Chappelle said. “He has his people’s heart…We love him more than you can ever recognize him for.”

A post shared by Rock & Roll Hall of Fame (@rockhall) 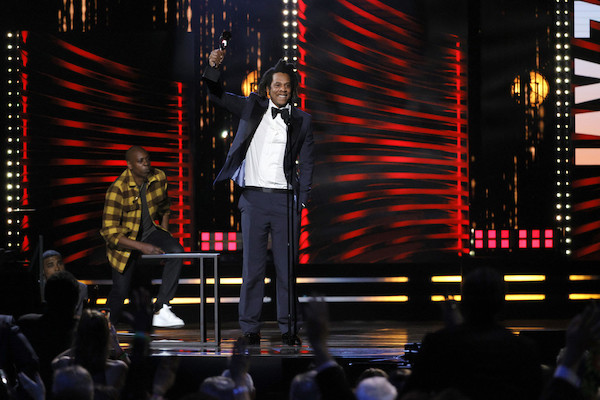 “I’ve turned to Jay-Z’s words at different points in my life, whether I was brushing dirt off my shoulder on the campaign trail, or sampling his lyrics on the Edmund Pettus Bridge on the 50th anniversary of the Selma march to Montgomery,” said POTUS.

Delivering the longest speech of the night, the Hip Hop mogul made sure to give props to his former business partner/Roc-A-Fella co-founder Dame Dash:

“I would watch these guys, and you know they had big rope chains, and they wore leather, and sometimes even the red-black-green medallions, and whatever they wore, everybody would wear the next day,” Jay-Z said in his acceptance speech, referencing inductee LL Cool J, too. “And I was like, ‘That’s what I want to do. I want to be like those guys.’ And so I set out on my journey, writing at my table—shout out to Dr. Gloria Carter in the house, she bought me the green notebook.”

“We was like we gonna create our own company, you know? That’s hip-hop. And we created this company called Roc-A-Fella Records,” he said. “Shout out to Dame [Dash]; I know we don’t see eye to eye, but I can never erase your accomplishments, and I appreciate you and thank you for that. And shout out to [Kareem] ‘Biggs’ [Burke]; he’s one of the most honorable people I’ve ever met. We created something that will probably never be duplicated.”

Check out clips from Hov’s acceptance speech above and below:

A post shared by Rock & Roll Hall of Fame (@rockhall)

You can watch his full speech below: 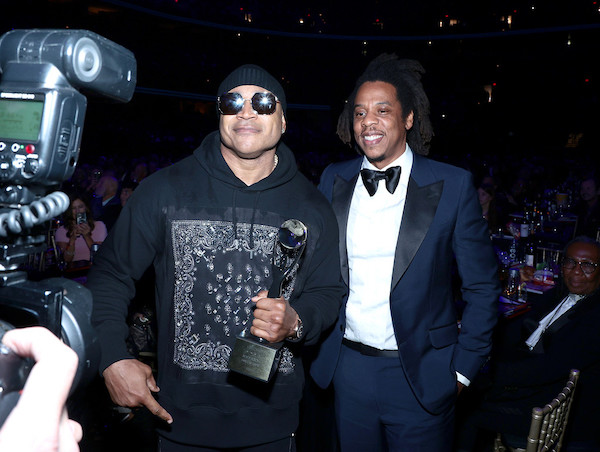 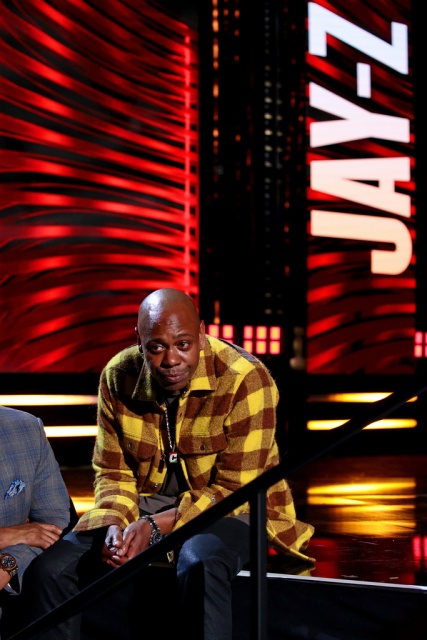 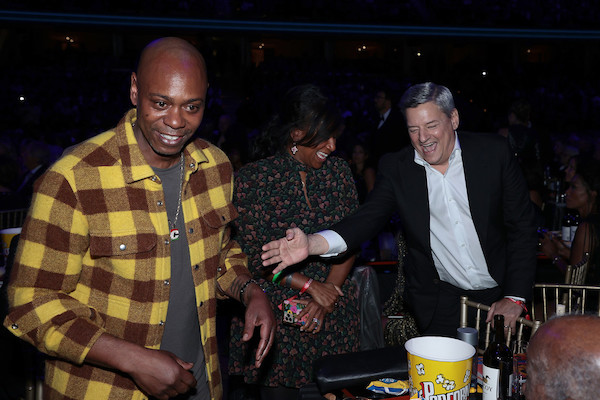 Netflix co-CEO Ted Sarandos was spotted laughing it up with Dave Chappelle in a public show of support after the trans community (including Netflix employees) tried to cancel the comedian over his transgender jokes in “The Closer.” The streaming giant refused to take down Chappelle’s comedy special from the platform despite public outrage over the comedian’s jokes. 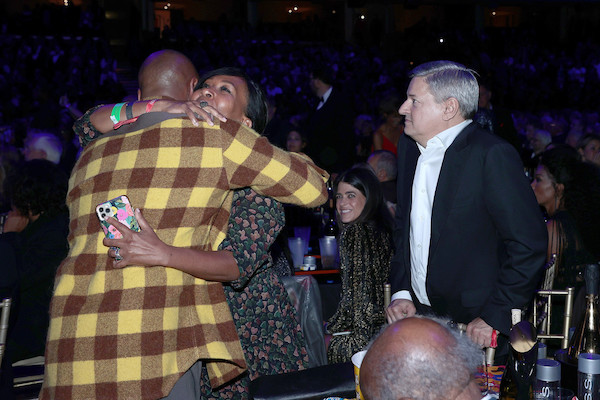 The famed comedian embraced Ted’s wife, Nicole Avant, who is the daughter of former Motown Chairman Clarence Avant. Her father – dubbed the Black Godfather of Music – was also inducted into the Rock Hall, so they were there to celebrate him as well.

It doesn’t appear Mrs. Carter was not in attendance, but we wouldn’t be surprised if she popped up with some flicks from the event on her social media accounts. Y’all know how Bey does.

Thank you to everyone in that video package , I’m definitely gonna cry in the car .

In my excitement , I failed to prize, and acknowledge JAZ-O, he was the hometown hero that made the dream tangible . Thank you good man… ok let me lose this password for another year or so . Thank you all again , incredibly humbled by your love .

The 51-year-old entertainer took to Twitter to thank everyone for their kind words in the tribute video and he also gave a shoutout to Jaz-O after forgetting to give him his props during his acceptance speech. 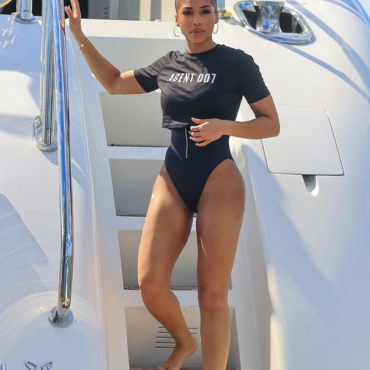