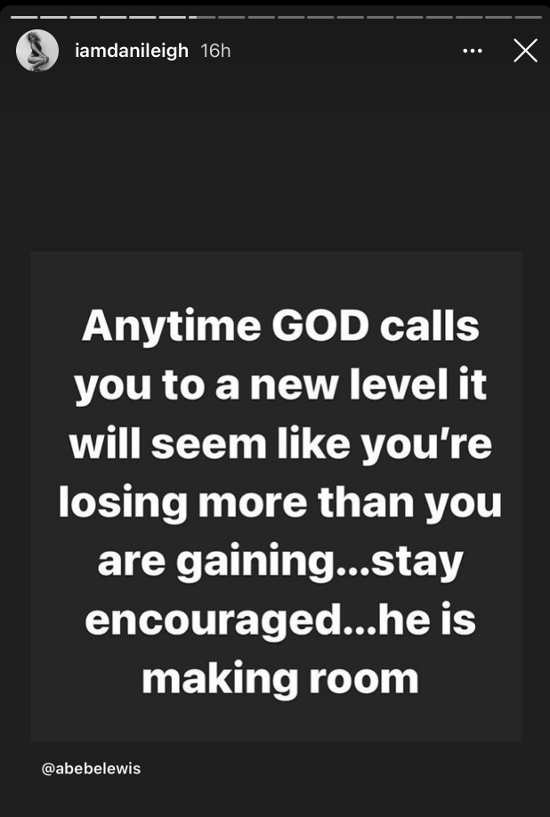 DaniLeigh has been getting dragged since announcing she broke up with DaBaby. And the dragging had everything to do with her controversial “Yellow Bone” song. Read DaniLeigh’s clap backs and what DaBaby’s kid’s mother, MeMe, has to say inside…

From controversy about a song dedicated to “yellow bones” to a full blown breakup. Needless to say, DaniLeigh isn’t having the best 2021 so far. And from the looks of things, she will not be spending Valentine’s Day with rapper DaBaby.

At the beginning of the year, DaniLeigh and DaBaby packed on the PDA going full throttle with their new relationship, sharing lovey dovey pics and videos on their social media accounts (mainly DaniLeigh) and dropping flirty comments under each other’s posts.

It seems since they’re both musicians, they decided to dedicate songs to one another. DaniLeigh was the leading lady in DaBaby’s “Masterpiece” video, which is supposedly an ode to their relationship. The singer thought she would do the same, except her track “Yellow Bone” received tons of backlash for giving off strong colorist vibes.

“Yellow bone, that’s what he wants,” Dani sung on the track. Fans were quick to point out the lyrics felt like shade aimed at DaBaby’s brown skin daughter’s mother, MeMe.

The 26-year-old Dominican singer – who says ‘n*gga” excessively – attempted to make folks believe she isn’t colorist because she dates a “whole chocolate man” and has “beautiful dark-skinned friends.” Her words, not ours.

Well, DaniLeigh’s “Yellow Bone” lyrics came back to haunt her (again) after she announced she and the North Carolina rapper called it quits.

”Officially single [black heart emoji],” she wrote on IG Stories. The “Lil Bebe” singer also scrubbed all the pictures she posted of DaBaby from her account.

She also posted this subliminal:

Since the announcement, social media users have been clowning her about the breakup, using her own lyrics as ammunition:

Dani Leigh and DaBaby broke up I thought yellow bone is what he want boo? pic.twitter.com/1zNKnz3OJ9

Danileigh did all that yelling abt Dababy wanting a yellow bone for him to leave her 2 weeks later pic.twitter.com/73sQqQR8oy

DaniLeigh just lost the blackest thing about her IM- pic.twitter.com/k8LGwDB31n

Dani Leigh cashed out on a Lambo for Da Baby birthday just for them to break up during Black History Month. Damn Yellow Cartilage lol

“Is this all y’all gon’ say??? And for how long??? Come up with some new ft or jus get off my page,” DaniLeigh said in TSR’s comments.

They clearly got under her skin.

The “BOP” rapper put up an IG post about finding a date for Valentine’s Day, seemingly co-signing the breakup. Womp. He reposted a TikTok video by India Love where she showed off her rendition of the #MasterpieceChallenge.

”This Tik Tok is a #Masterpiece @indialove,” he wrote. Sounds like he’s shooting his shot as well.

DaBaby then announced he’s picking one woman who delivers the best re-enactment to get “flewed out” with him on V-Day.

It’s worth noting DaBaby and DaniLeigh no longer follow each other on IG.

MeMe had to gather a fan who came on her page talking about her daughter’s father and his now ex-girlfriend.

Right before the breakup announcement, MeMe was telling fans DaBaby is still in love with her:

DaniLeigh & DaBaby’s relationship felt like a PR stunt to must people, so the breakup news isn’t all that shocking.

The ex-girlfriend of Chad Wheeler is publicly speaking out for the first time after she was brutally attacked by the former Seattle Seahawks lineman. Deets on Alleah Taylor’s interview inside…. The ex-girlfriend of former Seattle Seahawks lineman Chad Wheeler has spoken out publicly for the first time following the alleged brutal attack on her life. Alleah Taylor spoke with CBS correspondent Jericka Duncan in a sit-down interview – set to air tomorrow morning – and detailed what happened before she […]