Damson Idris & Saweetie Spark Dating Rumors With Viral Video, But Could It Be For A Calvin Klein Ad?

Fans are speculating if there is a coupledom situation between the young stars. However, it’s possible their recent link up could involve a project with Calvin Klein. More inside…

Damson Idris and Saweetie…dating? I know that’s right! Not so fast though.

The Internet is in a frenzy after a video of the “Snowfall” actor and west coast raptress went viral. The British hottie shared a video of the “Back To The Streets” raptress flexing her piano skills on his IG Stories and now everyone is speculating if they are a couple.

In the clip, the 28-year-old raptress played Beethoven’s “Für Elise” on the piano as the 30-year-old actor filmed her before they both broke out in laughter.

Get into the clip below:

“@saweetie My [piano emoji] teacher,” he captioned the video.

It’s interesting because just a few days ago, the ICY GRL raptress was tweeting about wanting “babies.” TV personality & father-of-seven Nick Cannon involuntarily chimed in with the quickness, posting some emojis and it turned into a whole “thing” over the weekend. Missed it? Catch up HERE.

The Content Queen is single after ending her relationship with Migos rapper Quavo last year and as far as we all know, Damson is also seemingly single. So, it’s a possible hookup. Or…it could be something business related with Calvin Klein.

Just yesterday, Saweetie announced her “Icy Season: A Saweetie Special” is set to go down (today) on Amazon Live and its co-hosted by Calvin Klein and Amazon. The show is co-headlined by Symone from “RuPaul’s Drag Race”

You can catch Saweetie’s “Icy Season: A Saweetie Special” tonight at 7pm EST on Amazon Live.

It’s not you, it’s me. #MyCalvins @CalvinKlein pic.twitter.com/AbfYnelAAR

“Love art in yourself, and not yourself in art.”

Pausing to think… In neutral… How else do you say it?@damsonidris: On the screen, on the stage. Nigerian actor from London. The star of Snowfall.

The Language of Calvin Klein. #mycalvins

Whew! LAWD. This man is fine.

Time will tell if this is the beginning of a new romance or just a business collaboration. 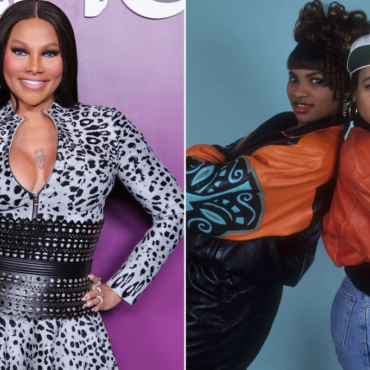 Salt-N-Pepa’s Sandy Denton: Police Thought We Were Singing ‘P*ssy’ Not ‘Push It’

Salt-N-Pepa’s hit “Push It” nearly got them arrested back in the 90s. via Page Six: Police used to flock to the group’s live shows, watching and listening for when they performed their 1986 smash, Sandra “Pepa” Denton tells Page Six. “They said if you say a curse word, we’re going to take you off the stage,” Denton told Page Six at the Glamour’s Women of the Year Awards on […]