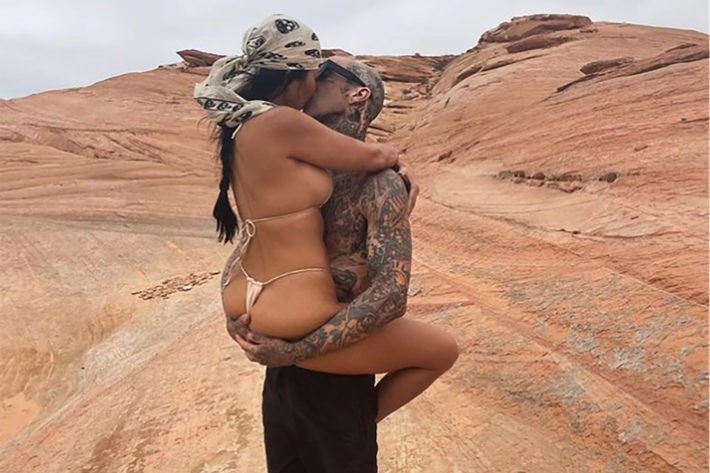 Travis Barker and Kourtney Kardashian are laying it on thick!

On Monday, the 42-year-old shared a photo of herself kissing her new man during their baecation to Utah’s Amangari resort.

In the steamy shot, Barker can be seen lifting a bikini-clad Kardashian in his arms as they shared a smooch in the middle of the desert.

“Just Like Heaven,” Kardashian captioned the shot on her Instagram, to which Barker replied in the comments section, “EVERYTHING.”

The couple also shared pictures from what appears to be a cheeky game of Bananagrams to their respective Instagram Stories.

In Barker’s post, the lettered tiles from the popular game spell out “orgasm” in addition to “tip,” “pop” and “ex,” among other words.

Meanwhile, Kourtney’s photo shows another set of tiles spelling out the words like “vegan,” “girl” and “raw.”

Last week, Barker celebrated Kardashian’s birthday with an extravagant white gardenia and tulip floral arrangement before whisking her away to Laguna Beach for a romantic getaway.

The drummer also penned a sweet tribute to his girlfriend alongside a PDA-packed slideshow on Instagram, featuring multiple photos of the pair kissing and embracing.

“I F– LOVE YOU! ?. YOU’RE A BLESSING TO THIS WORLD. HAPPY BIRTHDAY @kourtneykardash,” Barker captioned the post.

In January, a source confirmed their relationship to PEOPLE, saying at the time that Kardashian and Barker have been “friends for a long time, but it’s turned romantic.”

The pair later made things Instagram official with a hand-holding picture over Valentine’s Day weekend.

Since then, the two have been spending time with each other’s families, with Kardashian enjoying a ski vacation with Barker’s family earlier this month and the rocker heading to Palm Springs to spend time with the Kardashian-Jenner clan for Easter.

“Kourtney still seems very happy with Travis. He is very into her. He constantly gives her compliments and attention. You can tell he is thrilled to be dating her,” the source said. “Kourtney is soaking it all up and enjoying life.”

Has anyone checked on Scott Disick lately? 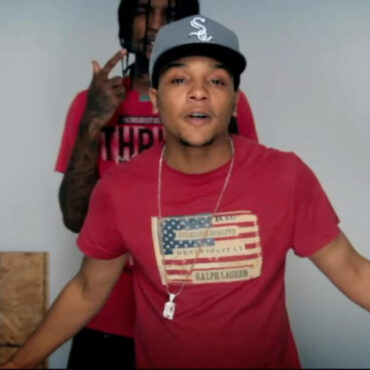 A suspect has been arrested for the murder of Chicago rapper Tray Savage. via Page Six: Demitri Jackson, 20, was recently taken into custody in Fort Worth on a murder warrant in the shooting death of Tray Savage, a 26-year-old rising rapper who was gunned down in Chicago’s South Side in June 2020, the Chicago Tribune reported Sunday. Prosecutors said Jackson, formerly of Chicago, was affiliated with the same street gang […]