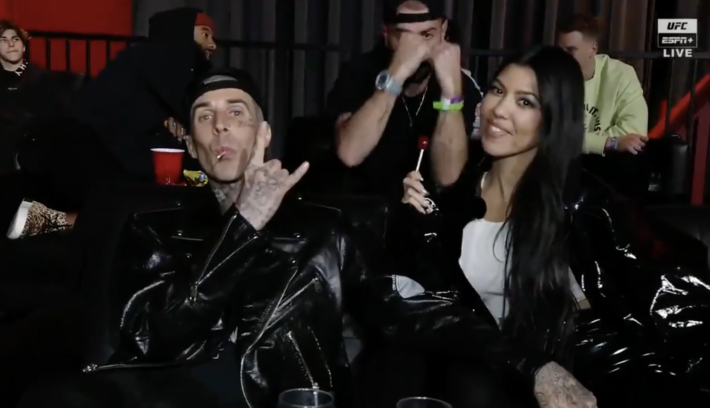 Kourtney Kardashian and Travis Barker hit the streets of Las Vegas for a night on the town — and a double date.

On Saturday, March 27, the Keeping Up With the Kardashians star and her blink-182 drummer boyfriend were seen in the VIP section of the UFC 260: Miocic vs. Ngannou 2 event at the UFC Apex facility in Enterprise, Nevada. A video, posted on ESPN’s Twitter account, revealed the couple enjoying lollipops while looking coy for the camera.

However, the two weren’t alone. Also in attendance at the UFC fight were Megan Fox and Machine Gun Kelly, who are friends with the stars. The New Girl alum gave a peace sign to the camera while MGK toasted his drink.

Though the two couples were not seated at the same table, they made the most out of their Las Vegas trip. Following the show, the foursome made it over to The Cosmopolitan’s bar The Barbershop Cuts and Cocktails, where Barker and Kelly performed blink-182’s “All the Small Things.”

Barker and Kelly have been friends for a decade. Barker helped produce the “My Blood Valentine” singer’s latest album, Tickets To My Downfall.

As for Barker and Kardashian, the new couple recently took their friendship—they’re neighbors in the same Calabasas community—to the next level. In January, the two went public with their romance weeks after fans noticed more interactions between the duo on social media.

“He is a great boyfriend and really treats her well,” a source close to Kardashian revealed to E! News. “He showers her with gifts and compliments. She’s enjoying it. It’s very easy to date him because they have known each other for so long. He was always into her and it finally happened.”

In addition to taking a trip to Vegas together, Kardashian and Barker recently proved they’re locked down when the Poosh founder penned a love note for her man, which he shared to Instagram.

MGK, Megan Fox, Travis Barker and Kourtney Kardashian in the house for #UFC260 ? 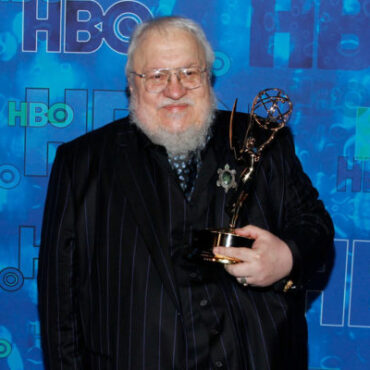 Game of Thrones author and four-time Emmy winner George R.R. Martin has signed a five-year overall deal with HBO, extending his relationship with the media entity. via Complex: The massive deal, which is reported to be worth somewhere in the mid-eight figure range, will see Martin develop programming for HBO and its streaming service HBO Max. There are currently several Game of Thrones projects that are being developed while one has already been greenlit. […]