Taking a job with the NFL is a dream come true for athletes who long to hit the gridiron in hopes of a championship. However, it’s hard work. It’s takes discipline, sacrifice and strength to get banged up by 300lb men every week.

Sometimes it’s too much for some players – like quarterback Dwayne Haskins.

Yesterday, the Washington Football Team announced they were releasing last year’s first-round draft pick with just one game remaining in the season. He is now a free agent after he went unclaimed on waivers today, which means that 31 teams had a chance to claim the 2019 first-round draft pick and his contract by Tuesday’s deadline, and they all passed. Yikes.

The Washington Football Team is currently fighting for a spot in the NFL playoffs, so this tells you the team wanted him gone expeditiously *T.I. voice*.

“This afternoon I met with Dwayne and informed him that we would be releasing him,” Head Coach Rivera wrote in a statement. “I told him I believe it would benefit both parties if we go our separate ways. We want to thank Dwayne for his contributions these last two seasons and wish him well moving forward.”

The 23-year-old athlete also released a statement after he was waived from the team:

“My time with the WFT has unfortunately come to an end. I thank he team & fans for the opportunity to play for the team I grew up rooting for. I take full responsibility for not meeting the standards of a NFL QB & will become a better man & better player because of this experience.”

This wasn’t a good season for the young NFLer. He served up a poor performances on the field and last week he violated the team’s COVID-19 protocol by attending a strip club. Sighs…

Haskins never delivered on his promise as a first-round pick in Washington. In 16 games including 13 starts, Haskins completed 60.1 percent of his passes for an average of 175.3 yards per game with 12 touchdowns and 14 interceptions. He took 49 sacks for a loss of 345 yards. Washington went 3-10 in the games that he started.

He was benched twice this season by first-year Washington head coach Ron Rivera. His second benching arrived Sunday amid a poor effort against the Carolina Panthers. It also arrived on the heels of Haskins’ second COVID-19 protocol violation of the season. That violation led to Rivera stripping him of his captaincy.

ESPN’s Booger McFarland – a former NFLer – hopped on national television and spewed some problematic rhetoric about Black players where race shouldn’t even matter in the situation.

Here’s the thing, if you’re not cut out for the NFL, you’re just not cut out. As McFarland shared his opinion about Haskins’ situationship, he generalized his statements that included almost all of the league’s players, being that the majority of the NFL is black.

After the show aired, Booger reposted the clip on his Twitter account and doubled down on his comments about Black QBs:

My message was to all players which I said but specifically to the part of the NFL that’s makes up almost 70% the AA players. And of course I’m not speaking to ALL but in my 20+ years around the NFL I’ve seen to many cases. I stand by what I said whether u agree or disagree pic.twitter.com/6buvIc7Tje

”My message was to all players which I said but specifically to the part of the NFL that’s makes up almost 70% the AA players. And of course I’m not speaking to ALL but in my 20+ years around the NFL I’ve seen to many cases. I stand by what I said whether u agree or disagree,” McFarland tweeted.

We hate how race was the focal point of his argument when it’s more so a generational issue.

Last night, a grown man named “Booger” got on TV and blamed an entire generation of Black #NFL players for the bad decisions #DwayneHaskins willingly made.

It’s a shallow and lazy take. Booger McFarland was loud, and wrong.

Booger going off on Haskins like white QBs have never done the same. Johnny Manziel, Ryan Leaf and Todd Marinovich just to name a few. Black QBs in the league right now are some of the best. Needs to get off his high horse. This isn’t a “AA” problem. Some people just can’t cut it

How fast we forget about the problematic Johnny Manziels of the NFL that constantly got in trouble, yet, he wasn’t a representation of all white players in the league. Another troublesome QB that comes to mind is Ben Rroethlisberger.  Did anyone come down on either of them and generalized all the white players? No. What Haskins did was immature and not smart, but his actions aren’t a representation of all the Black players in the league. Russell Wilson, anyone?

Former NFL tight end/activist Martellus Bennett reacted to Booger’s comments and went IN. He also made a lot of valid points as well. Read his tweets below:

I see Booger digging for gold but only found shit.

Hey African American athletes build the fuck outta your brand while you can because the league can dump you whenever they feel like it. Build your business while you play. Build everything outside of the game while you have that stage.

And black constantly ask those questions how can I get better, I can help my team if that wasn’t the truth the league wouldn’t be 70% black. So that’s some bullshit too. Niggas be tripping on TV.

The team is constantly building their brand especially Washington who is in the middle of a rebrand because dumb decisions they made. Lol.

Let me get back to building my brand(s).

It’s not productive to make broad generalizations about black people or black players. Or anyone, really.
I’m sure many players do think about the wrong things. But if we’re singling out black players – there are SO many black players that do all the right things in the league.

And that’s just that on that! 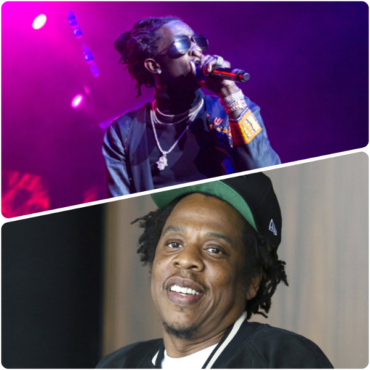 Social media users commenced a Twitter dragging of Young Thug after he made some comments about rap icon Jay-Z. Find out what he said, plus who Thugga would like to battle in VERZUZ inside… Some things are just not up for debate. Like, Jay-Z being one of the greatest Hip Hop legends…period. There’s no arguing this. However, people are entitled to their own opinions. Except these days when you share […]