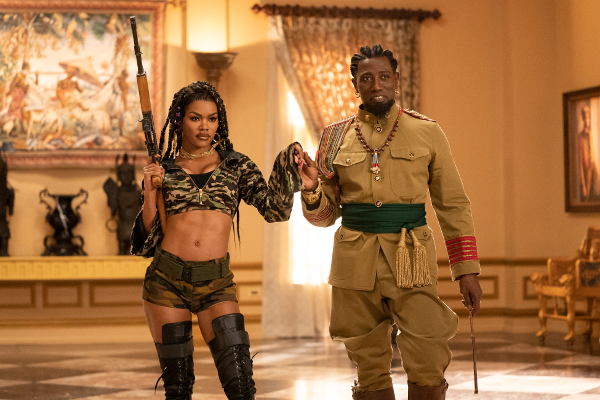 Coming 2 America took us BACK to Zamunda & Queens for another round of laughs. Wesley Snipes was the film’s favorite, Teyana Taylor served up slayage and everyone’s talking about Nomzamo Mbatha’s breakout performance. More inside…

The long-awaited sequel to the hit 1988 original has dropped on Amazon Prime Video and everyone is talking about it on social media.

It was like a family reunion with several new additions you didn’t mind coming over.

Not to drop any spoilers, but the first scene of the movie takes us to the wealthy African nation of Zamunda inside Prince Akeem’s (who eventually becomes king) massive royal palace.

Rapper Rick Ross opened the doors of his estate (that sits on 235 acres) in Fayetteville, Ga. to help bring the African nation to life. Much of the film was filmed in Atlanta and production needed a space big enough that could deliver African royalty through the screen. Sayless. Rozay’s 109-room palace that spans over 45,000 square-feet (previously owned by boxer Evander Holyfield) was the perfect location.

The MMG honcho made a cameo in the film as a soilder of General Izzi’s army.

Who else noticed Rick Ross in the movie #ComingToAmerica2 pic.twitter.com/99Hg6VhPNZ

It seems everyone’s favorite character was General Izzi, played by Wesley Snipes, who is Prince Akeem’s main rival in the film. He played the villian role very well and was very funny. Peep reactions below:

#Coming2America Wesley Snipes stole the show for me! Him and is Step Team. pic.twitter.com/ww2vmjm7VK

I’m happy they made another one because it feels like a family reunion and it celebrates just how GREAT the first movie is. Wesley Snipes and Leslie Jones kill it #ComingToAmerica2 pic.twitter.com/G016BiZgiS

#Coming2America was good fun. Sure, it’s ripe w/ predictable storylines & dialogue, but if you enjoy the comedic antics of Eddie Murphy, Wesley Snipes, Arsenio Hall & Leslie Jones, there’s enjoyment to be found. The costumes should 100% get some awards recognition. pic.twitter.com/Zbufl6mzDf

You gotta see Coming2America if for no other reason.. It’s to see the return of ‘Sexual Chocolate’ My brothers @TracyMorgan and @wesleysnipes killed it.. https://t.co/zy9vfzXAuI

South African actress Nomzamo Mbatha, who stars as Akeem’s son Lavelle’s love interest and royal barber Mirembe in the film, has also been getting love online from fans.

Happy @NomzamoMbatha Day!!!
Congratulations Zamo, you’ve work extremely hard for the moment. We are all proud of you! #Coming2America pic.twitter.com/Ib0tf0aeGf

Only checked it because of Nomzamo Mbatha and Trevor noah pic.twitter.com/6A0fyHMwho

The movie’s a 10/10. Wesley Snipes killed his role as General Izzi. King Akeem’s daughters are so beautiful. Nomzamo Mbatha slaying as usual. When I heard Davido’s “shekpe” A 10/10!!!!

Folks got hype when they saw Nigerian-American Davido performing his music in the film:

@davido performing “Assurance” in Coming 2 America has got to be the highest of heights for afrobeats yet….for me!

Thank you for all the hard work @davido . You ain’t really need to put in this much work but you do it anyway, for the culture!

There seems to be mixed reviews online about the film. See some responses and reactions below:

I really enjoyed watching #Coming2America it was nostalgic going down memory lane with the old characters coming back.

#Coming2America brought back so many amazing memories. They brought the whole cast back and so many other big names. No it’s not better than the original but it’s worth a watch for sure. Watching it makes you happy if you watched the 1st one, that’s for sure.

Coming to America 2 was FUNNY

IT WAS FUCKING AWFUL! https://t.co/PSVqQjH201

They did not have to remake Coming to America. Feels like they just dumped millions of dollars into it and hoping that would be enough.

Coming to America 2 is a good movie. Watch it. One thing we should appreciate is that we all have types of movies we watch. Coming to America 2 was hyped and it raised expectations from people. Watch it with an open mind. Some watch DC movies and to some those are not good at all

Overall, we enjoyed the film and we appreciated how the storylines and themes were “updated” to reflect our society now. If you haven’t yet, check out Coming 2 America steaming on Amazon Prime Video now. Tells us in the comments YOUR thoughts about the movie. 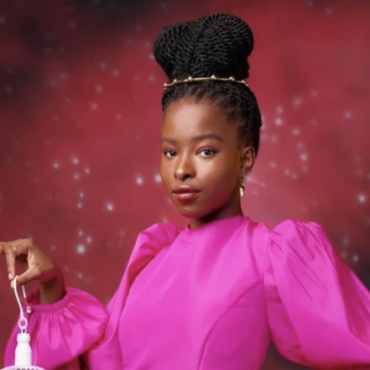 Amanda Gorman Says She Was Racially Profiled by a Security Guard: ‘This Is the Reality of Black Girls’ [Photo]

Amanda Gorman — the 22-year-old poet who made headlines with her powerful reading of “The Hill We Climb” during President Joe Biden’s inauguration — is opening up about a recent experience with racial profiling. via People: Gorman recounted the incident on Friday evening, tweeting, “A security guard tailed me on my walk home tonight. He demanded if I lived there because ‘you look suspicious.’ “ “I showed my keys & buzzed myself into […]