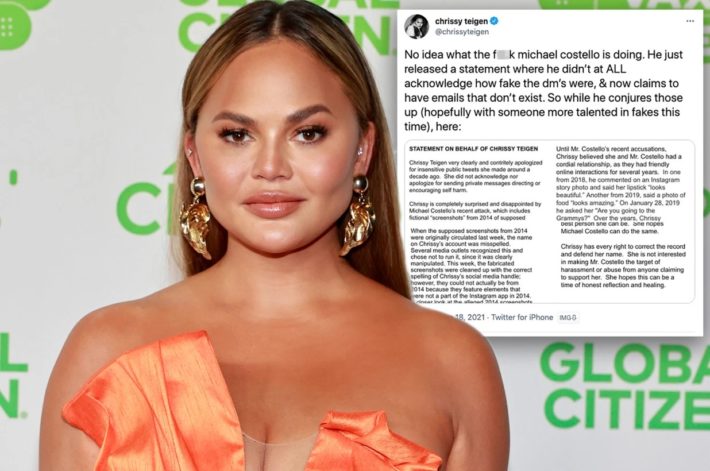 Chrissy Teigen says she’s “surprised” and “disappointed” by Michael Costello’s bullying accusations against her, saying the alleged DMs he posted between the pair are “fictional.”

On Friday, several hours after Legend defended his wife against Costello, she posted a lengthy Instagram caption alongside a statement – written on behalf of Teigen – that addressed the ongoing controversy.

“No idea what the f- michael costello is doing,” Teigen, 35, wrote, referring to Costello’s recent statement to the press saying he has emails that prove Teigen “has gone beyond social media to blacklist Michael Costello offline.”

“He just released a statement where he didn’t at ALL acknowledge how fake the dm’s were, & now claims to have emails that don’t exist. So while he conjures those up (hopefully with someone more talented in fakes this time), here,” she wrote in the caption.

“And remember yesterday how confused he was about Leona Lewis’ stylists being so kind to him in recent years? Well imagine my surprise when I have these from the past 3 years. Please do NOT bully this man under the masquerade of defending me,” Teigen continued in her caption. (Singer Leona Lewis recently spoke out in a lengthy Instagram Story post about her negative past experience with Costello, saying she was “so embarrassed and deeply hurt” by him.)

“I’ve taken it ALL. I’ve heard it all. I just beg for you to know the truth. Michael, you are now causing actual pain to people who are trying to better themselves. Enough. Or this WILL go further. Not here, but an actual court of law,” she added. “And every dime we win will go to an anti bullying charity focused on turning this s- show into a positive.”

“I wish you peace and healing,” she concluded her caption. “I have some places I’ve been attending if you’d like the connects.”

Along with the lengthy personal message, Teigen posted photos of the new statement on her behalf. The statement said Teigen “clearly and contritely apologized” for her past “insensitive public tweets” and not for “sending private messages directing or encouraging self-harm.”

The Costello drama – which erupted after the designer cited “unhealed trauma” for racism and bullying he said he experienced from Teigen – follows the Cravings cookbook writer’s apology on Monday for past hurtful tweets in a Medium post.

“There is simply no excuse for my past horrible tweets. My targets didn’t deserve them. No one does,” she wrote earlier this week, apologizing.

“Many of them needed empathy, kindness, understanding and support, not my meanness masquerading as a kind of casual, edgy humor,” she continued. “I was a troll, full stop. And I am so sorry.”

But now, the statement said that Teigen is “surprised and disappointed” at what is described as an “attack” from Costello, “which includes fictional ‘screenshots’ from 2014 of supposed private messages that Chrissy did not send.”

Michael Costello also posted videos where he was VERY confused about Leona Lewis’ stylist reaching out and being kind. Imagine my surprise when my past three years have been this: pic.twitter.com/cxiMAlLUvm

The statement acknowledged that “she did post a comment” on Costello’s Instagram at the time, after he was accused of “making a racist remark.” However, it goes on to say she deleted the comment after Costello denied the racism accusation and claimed the remark in question had been photoshopped.

“Chrissy has never conspired with anyone to harm his career,” the statement continued. “The stylist he also attacked in his recent comments was not a part of Chrissy’s team until 2016 and did nothing to harm Mr. Costello.”

Teigen’s post also shared how she believes the two had a “cordial relationship” and were on “positive terms” based on “friendly online interactions for several years.” In an effort to back that up, Teigen provided alleged screenshots of DMs from Costello, in which he complimented her several times.

“This week, the fabricated screenshots were cleaned up with the correct spelling of Chrissy’s social media handle; however, they could not actually be from 2014 because they feature elements that were not a part of the Instagram app in 2014,” the statement on behalf of Teigen continued, referring to details explained in a Business Insider story about the matter.

(In a previous statement to PEOPLE, a representative for Costello denied the DMs were faked. “The fact that Chrissy Teigen’s team is desperately trying to prove the DM’s are fake and attempts to discredit Michael Costello, a victim of trauma and bullying by Chrissy Teigen both online and offline, confirms that she remains the same bully, despite her public apology,” the statement read.) 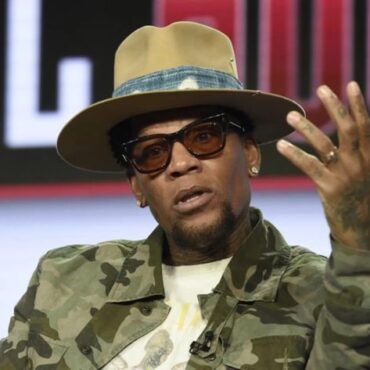 D. L. Hughley discusses the impact of President Biden signing legislation into law that establishes June 19 as Juneteenth National Independence Day. via: Revolt “Well, it’s funny because Black people asked for justice and what we got was a holiday,” he said. “It’s like when Amazon sends you something dope that you didn’t order. Well, you keep it, but you still want your original order.” “It’s easier to get a […]