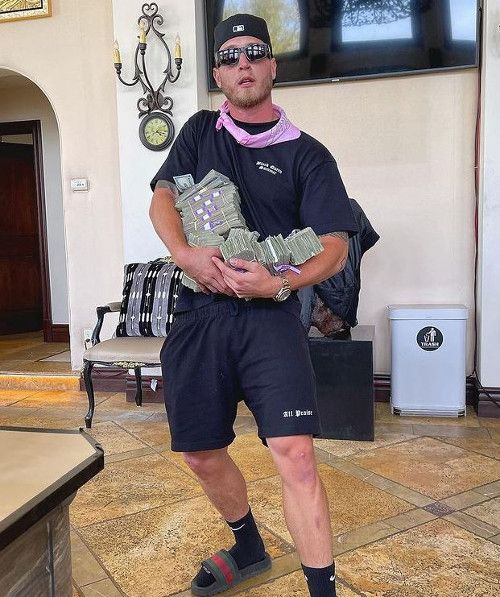 Chet Hanks doesn’t seem bothered by the $1 million lawsuit his ex-girlfriend Kiana Parker filed against him accusing him of assault. He just dropped the visuals to his “White Boy Summer” track. More inside…

Chet Hanks – the son of Hollywood actor Tom Hanks and Rita Wilson – seems unbothered by the $1 million lawsuit his ex-girlfriend Kiana Parker filed against him accusing him of assault.

Earlier this month, photogs spotted Chet in the streets of Cali filming and he told them he was filming a movie. Turns out, he was filming scenes for his music video to “White Boy Summer,” a movement he announced at the end of March.

Get into the 30-year-old’s beer out of a brown paper bag visuals below:

The music video comes on the heels of his ex-girlfriend Kiana Parker reportedly SUING him for $1 million with assault claims. She filed the lawsuit in Texas and she alleged Chet got physical with her on multiple occasions between October 2020 and January 2021.

The site goes on to report:

In the lawsuit, obtained by TMZ, Kiana details an alleged incident TMZ first reported last month — she claims it happened in October 2020 in New Orleans, where Chet was shooting “Your Honor.” She claims he became enraged when she told him she was leaving their room at the Windsor Court Hotel … grabbing her by the wrists and arms and pushing her around the room, knocking over tables.

Kiana filed a restraining order against Chet, accusing him of calling her a “ghetto black b*tch” and said no one would believe her against him because he’s “Chet Hanks and I wasn’t sh*t.” A video of an alleged altercation between Chet and his ex-Kiana leaked online. In the clip, Chet shows off blood gushing from his head after accusing Kiana of threatening him with a knife. The incident reportedly happened on January 8th at Chet’s home in Sugarland, TX.

In the docs, Kiana claims Chet threatened to kill her in a murder-suicide the month after the alleged New Orleans incident, threatening her while her twins were inside his Sugar Land, Texas home.

In the suit, Kiana claims Chet was extremely aggressive while she was moving her stuff out of his home that day, alleging he came at her with a knife and claiming she swung a pot at his head in self-defense.

In his own defense, Chet filed a lawsuit against Kiana for assault and battery. He also made claims she stole money from him.

As we said, Chet is acting unbothered by the lawsuit:

Joie Chavis did a Q&A where she revealed she does NOT receive child support from her kids’ rapper fathers, Bow Wow & Future. Oh? But is this totally true, or a play on words? More inside… Joie Chavis hopped on her YouTube channel to dispel assumptions made about her.  And as you can guess, it's going viral. During the candid Q&A, she made sure to let everyone know she is NOT a gold digger and then revealed she doesn’t even […]