Chet Hanks – the son of actor Tom Hanks – says Summer 2021 will be a #WhiteBoySummer. Oh? News to us. Now, the Internet is blowing up about it. More inside…

While the ladies have been prepping for another #HotGirlSummer, apparently the guys are getting in on the action. The white zaddys…that is.

Chet Hanks – the son of Hollywood actor Tom Hanks and Rita Wilson – made an announcement on social media over the weekend that this summer will be all about the “vanilla kings” and warned his followers to “get ready.”

“I just wanted to tap in really quick. I just got this feeling man that this summer is ’bout to be a white boy summer, you know? Take it how you want. I’m not talking like Trump, Nascar type white. I’m talking about, you know, me, Jon B, Jack Harlow type white boys. So let me know if you guys can vibe with that and get ready. Cause I am.”

“Is it bout to be a #WhiteboySummer or am I trippin ???? Tag a REAL vanilla king #Respectfully,” he captioned the video.

Singer Jon B commented on his video with laughing emojis:

Some folks are here for a #WhiteBoySummer, while others aren’t. Peep some reaction tweets below:

two people have sent me this video this week. a sign pic.twitter.com/c015ODVQgh

Jon B when Chet Hanks said they’re about to have a white boy summer this year
pic.twitter.com/eig4CPztt7

Chet Hanks: “It’s about to be a white boy summer”

Chet loves stirring up things on social media. We’re not totally mad at a #WhiteBoySummer, but let’s pump the breaks on “vanilla kings” being thrown around because…NAH. 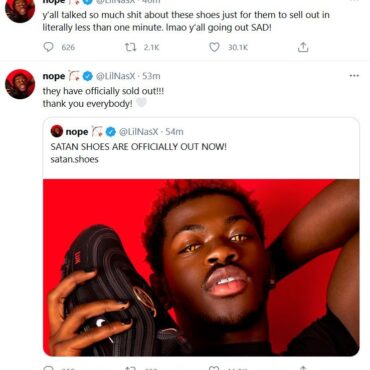 Lil Nas X Is King Of The Trolls After Backlash From His Demonic Video & Satan Sneakers Drop – Goes In On Everybody!

Lil Nas X is popping back at critics who have been coming after him over his demonic “Montero (Call Me By Your Name)” music video and his SATAN sneakers – which include a drop of human’s blood. Sighs. More inside… Lil Nas X dropped the visuals for his new single “Montero (Call Me By Your Name)” and it has sparked controversy. The reason? Well, there’s one scene that shows Lil […]