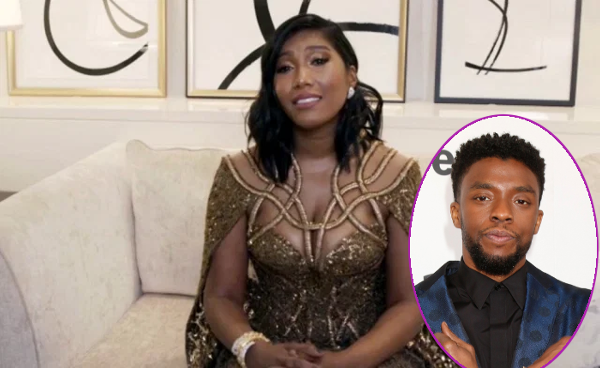 Between Chadwick Boseman’s wife and the kiddies who happily recognized him as “The Black Panther” during the 2021 Golden Globes our tissues were wet with tears. The Black Panther star was awarded Best Actor in a Drama award and his wife, Simone Ledward Boseman, accepted the award on his behalf. Peep her emotional acceptance speech inside…

It still doesn’t feel real that Chadwick Boseman is no longer with us.

While he may not be here in the physical form, his spirit is definitely still amongst us.

OK, so first off the Golden Globes shared this segment that featured young kids where TikTok star La’Ron Hines hilariously quizzed a group of children, including his god-daughter Ja’Bria McCullum, questions about the Golden Globes. And if they didn’t get ANYTHING else right, they knew exactly who Chadwick Boseman was – their Black Panther idol.

Peep the touching moment below:

The real stars of the #GoldenGlobes pic.twitter.com/Il1h18KxIs

”He would thank his team on set for this film—Deidra Dixon, Sian Richards, Craig Anthony, and Andrew Carlone. He would say something beautiful, something inspiring, something that would amplify that little voice inside of all of us that tells you you can, that tells you to keep going, that calls you back to what you’re meant to be doing at this moment in history.

“He would thank Mr. George C. Wolfe, Mr. Denzel Washington, lots of people at Netflix. He would thank Ms. Viola Davis, Mr. Glynn Turman, Mr. Michael Potts, Mr. Colman Domingo, Ms. Taylour Paige, Mr. Dusan Brown. And I don’t have his words, but we have to take a moment to celebrate those we love. So thank you, HFPA, for this opportunity to do exactly that. And, hon, you keep ’em coming. Thank you.”

Watch the touching speech below:

The world was utterly shocked when news broke that Chadwick Boseman died. The Black Panther star died in August 2020 at the age of 43 from stage III colon cancer. He had kept his diagnosis a secret for four years, so when he passed away, it hit hard. And it still hurts.