Carmelo Anthony is still trending on social media after La La Anthony filed for divorce after 11 years of marriage. New unconfirmed allegations about the NBA baller possibly being the father of TWIN babies have surfaced, which could potentially mean Melo made three children while married to La. Whew!

Get the latest inside…

It’s about to be a Hot Girl Summer for La La Anthony! The “Power” star recently filed for divorce from her husband of 11 years, Carmelo Anthony causing an uproar of reactions online.

Some folks were confused when the divorce news first hit because they thought La had already filed for divorce from Melo, while others were glad she finally pulled the plug on their marriage as the writing had seemingly been on the wall for a quite a few years.

Over the years, there have been umpteen rumors about Melo cheating on La. You’ll recall, La & Melo initially broke up in 2017 when there were rumors circulating that he got his (alleged) mistress, Mia Burke, pregnant. He’s allegedly the father of her daughter, and he still has not openly confirming this.

Since then, there were makeups to breakups to makeups again. However, these brand new cheating rumors – even unconfirmed and unproven – may have been the nail in the coffin for La.

So, we told you about the recent rumor that Melo was allegedly creeping with Lee Daniels niece, Miy Lee. There have also been rumors that Melo ALLEGEDLY got a woman pregnant …. with TWINS. The Internet has been playing detective and believe Lee Daniels’ niece is the mother of Melo’s alleged twins. Chile…..

Hollywood Unlocked reports they spoke with the woman and here’s some of what she told them:

A woman who rather not share her full name has revealed to us that Carmelo Anthony is allegedly the father of her newborn twins and she even has receipts! We were able to chat with the woman who alleged how they met, how he allegedly hid his new family from the public, and how one celeb [allegedly] got involved to get answers for Melo’s wife, Lala Anthony.

The woman explained that she met Carmelo in New York in 2020. After turning him down a few times, he insisted that he was not trying to hit on her but just wanted to be “cool” and “hang out.” Because of his good energy and vibe, she went along with it and kept in contact with him. She noted that although she knew Carmelo was married, he came off as a single man because he would FaceTime her in his bed at his home, who he shares with LaLa Anthony, and noted that he didn’t even spend holidays with his family.”

While she admits that she’s no angel, she says she honestly didn’t feel bad about seeing Carmelo because she alleges that she also knows “who’s f*cking LaLa too!”

The woman then talked about how she got pregnant, tried to get an abortion, but Melo allegedly didn’t show up to take her to the procedure.

Aside from that, in September, the woman found out she was pregnant with twins! The plan was for her to get an abortion in LA, which Carmelo agreed to as neither of them wanted it to turn into a bigger situation. The woman, 38, said she needed a medical abortion, which means she had to be accompanied by someone, as some places require. But Carmelo never flew back from Portland to LA to show up for the procedure.

It gets crazier. She claims Melo suggested she give birth to the babies in London where they would become British citizens and that would help them avoid controversy.

As time went on, she was no longer able to have the abortion so the two came up with a plan: To avoid controversy, they both agreed for her to fly out to London to have the babies with the agreement that he would come out there and visit when his season was over.

The babies were born in April, prematurely as they came out two months early! Sadly, they are still in the hospital as they have to remain there until her due date, which was scheduled for mid-June. (This is common for premature babies). However, the woman shared that her son developed problems with his brain and lacked oxygen, so he needed surgery.

The woman shared alleged text coversations where she updates “Melo” on their kid’s health. In the text coversation, she informs “Melo” one of the kids had to have surgery. After he doesn’t respond, she mentions she needs to put him on child support because she didn’t like the way he was responding to her when she asked for money. Peep the alleged texts below:

The woman called the baby that needed surgery “Cash,” which is the name of La’s on-screen son in “Power.” SMH.

It all sounds like a bad Tyler Perry movie and not all that believable, to be honest.  But nothing would shock us these days.

The alleged baby mama revealed one of La’s close friends allegedly hired a private investigator to get details about her:

She also noted that one of Lala Anthony’s close friends got involved and even hired a private investigator to find out who she was. However, the woman didn’t want to get too deep into those details as her main focus is to get her story out and grab Carmelo’s attention.

The woman said she’s coming out now because she’s tried of living a lie and her kids deserve to know who their father is.

As for her reason for speaking out now, she says she realized she’s been “living a whole lie” and it’s been eating her up inside. She has not told her family or close friends about her kids and even previously denied pregnancy rumors to protect Carmelo and his family.

Although he has provided a place and some money, she said that’s not enough for her kids who need to know who their dad is. “I’ve seen my wrong in the situation and I should’ve never let this get this far, but I don’t want my kids to suffer.” She even noted that she’s open to speaking with LaLa, but doubt she would give her the opportunity to talk things over.

She added that her motive is not to ruin Carmelo, “be messy or hurt people” adding, “I don’t want to destroy, their family.” She goes on to admit, “I just can’t function like this. I got to figure out how to deal with this… He will let me keep this a secret forever.”

WOW! This is top tier f*ckboi antics…if true.  But we’re also unsure what the alleged mistress expected from the beginning.

The Internet has been sounding off about the divorce AND twin rumors on social media:

Carmelo allegedly got another woman pregnant, this time with twins. That’s 3 outside kids on Lala. The divorce makes sense

Carmelo really had 3 babies on LALA?! 3! How can he cheat so disrespectfully?? Even twins nah God really wanted Lala gone from that man

It’s Carmelo Anthony have twins for me on lala wowwwwww this plot is thickand the lady named the baby “cash” wow so she was definitely watching power !

So Carmelo had twins on Lala & was secretly giving towards them financially…. same shit just a different year when does it end

Mfers on there way to Lala’s dms after divorcing Carmelo Anthony pic.twitter.com/65kV1Lutll

does anyone else remember when carmelo anthony said lala is married to him but he isn’t married to her?

lala is about to be married to the streets. pic.twitter.com/GdmYzSoEOn

Carmelo looking at his bank account after Lala divorces him pic.twitter.com/YGEr9Yjhyj

LaLa just filed for a divorce. Carmelo Anthony bout to lose the only ring he got.

Lala AND Kim K are both on the market during this Hot City Girl Summer pic.twitter.com/ElAlJFzPlb

Damn. No amount of heartfelt social media posts will reverse this (if true)…. 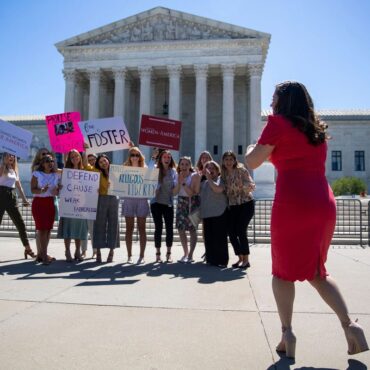 In a unanimous decision, the Supreme Court sided with Catholic Social Services (CSS) in their lawsuit against the city of Philadelphia for terminating their contract to screen foster parents due to CSS’s refusal to consider same-sex couples. What We Know: Philadelphia has custody of 5,000 children that have been abused or neglected. They have 30 contracts with private agencies to provide various services for these children, such as foster care, […]