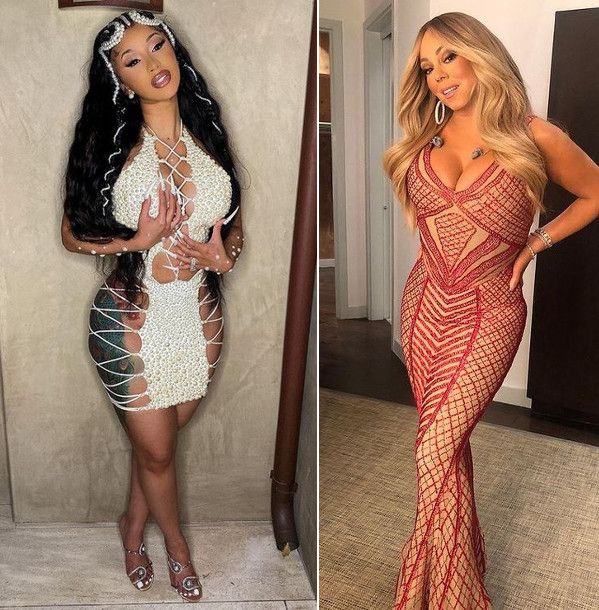 Cardi B chopped it up with Mariah Carey about the music industry and she spilled tea on how she handles industry relationships. Everything Cardi dished to MiMi for INTERVIEW magazine inside…

Cardi B is back!

Following the release of her new chart topper “UP,” the Bronx native makes a splash on the magazine circuit with a brand-new cover. The 28-year-old rapper is featured on Interview magazine’s Issue 535 in nothing but a pair of killer gold Balenciaga thigh-high boots:

Inside, the “WAP” raptress opened up about everything – from her childhood to becoming a Hip Hop superstar – during a candid conversation on the phone with the Elusive Chanteuse, Mariah Carey.

Being a vet in the music industry, Mariah is very familiar with shielding off industry people (the “I don’t know her” sound bite instantly entered our minds). Now that the “Bodak Yellow” rapper has a few years of fame under her belt, she was asked how she handles her industry relationships.

CAREY: You’ve settled into the whole celebrity thing. In terms of connecting with other artists, are there people you’ve met and had great relationships with? Like, they’re cool, and you became friends. And then are there situations where you’re like, “Well, I guess I could have been friends with this person if they hadn’t acted such and such a way”? I’ve noticed that in my life.

CARDI B: A lot of celebrities invite me to places, but I’m really shy. We’re doing this over the phone, but if it was in person, I wouldn’t be able to look you in the eyes. That’s how nervous I get around celebrities. And sometimes my head starts talking, like, “Oh my gosh, I look stupid, I feel stupid, I’m dumb.”

Due to her own beliefs about friendships, Cardi has a hard time differentiating “business friends” from real, ride-or-die friends.

CARDI B: I don’t want to get close to a celebrity and feel like we have a connection, and then out of nowhere they do some funny shit and disappoint me. I’ve always had the same friends. I’m very loyal. If I’m your friend, I’m going to always ride hard for you. But if you don’t ride hard for me or you do some funny shit, I’m going to feel a certain type of way. My husband always tries to tell me, “You can’t think like that because you’ve got to network and this is not real life. You got to understand that.”

CAREY: But that’s not easy.

CARDI B: It’s really not. You’ve got to understand that your business friends are not going to treat you like your real friends. It’s hard for me to put that in my head because growing up, loyalty was really big. But celebrities aren’t like that, and that’s something that you have to find out on your own.

The Grammy award winning singer said the music industry makes folks act a certain way and all she wants is from people is for them to be real with her.

CAREY: Do you think that the business has changed you or have you seen it change other people who you may have known before they came up?

CARDI B: That’s why I stay away from people. My fans want me to interact with more artists, but if I love their music, I don’t want to meet them because I don’t want to hate them. I’d rather just not know them at all and love them than meet them and be like, “Oh my gosh, this person’s a weirdo.” When your friends hurt you, you can vent on social media. When a celebrity does you wrong, you can’t vent because it becomes a problem.

The candid conversation covered hair and body insecurities Cardi struggled with growing up.

CAREY: I know that I didn’t, for my own reasons. When you were little, did you always know, “I stand out from the crowd. Different people notice me, I feel beautiful”? Or did you feel like an outsider?

CARDI B: Well, I’m from New York, right? And New York is a melting pot, especially where I grew up in the Bronx. I’m Trini and I’m Dominican, and there’s a lot of Dominicans that look a certain type of way. They have soft, pretty, curly hair. Growing up, guys would ask me weird questions like, “If you’re Dominican, why is your hair so nappy?” I used to dye my hair, and people used to be like, “Oh, your hair’s so crunchy.” And it would make me feel so weird. I was also really skinny when I was younger, and in the Bronx, it’s about being thick and having an ass, so young boys would be like, “Look at your flat ass. You ain’t got no titties.” And it would make me feel so ugly and undeveloped.

The outspoken rapper mom also touched on discrimination she has faced in the fashion and music industries as a woman of color – like how her white counterparts are paid more money for their deals.

CAREY: Do you feel that the record industry or the fashion industry, from your perspective, is inherently racist?

CARDI B: I don’t know if I would use the word “racism,” because everything is so technical right now. I have felt prejudice. I have been involved in endorsement deals, and then I found out that certain white people got more money for their deals from the same company. I do my research. I know how much money I made that company. My fans buy my shit. So it’s like,“ When you’re not paying me what you’re paying these other people, why is that?”It’s kind of insulting. And then when it comes to fashion, hip-hop is a big influence. And yet, Black artists have the hardest time getting pulls from designers and the hardest time getting seats at their fashion shows, and barely get endorsed by big fashion brands that we literally make trend

Bardi also talked about her start as a stripper, her mentality at the time, and whether or not she has any regrets about it now.

CARDI B: No. I went to a high school for performing arts. I used to sing, I used to rap, I used to act, all that shit. Once I started having troubles at home and got kicked out, I saw everything I did in high school as a silly dream. It wasn’t reality anymore. So when I started stripping, after a while, I just wanted to make $20,000. “If I make $20,000,” I thought, “I’ll open a fucking business and I won’t have to strip anymore.”Strippers talk a certain way. The stripper attitude is, “I’m not ashamed of being a stripper because a lot of these bitches don’t have shit. A lot of these bitches don’t have a place to stay, don’t have no car, can’t afford this, can’t afford that. Y’all out here fucking niggas for free, but y’all shaming me because I’m shaking my ass? Y’all hoes be showing y’all fucking bodies on social media, and y’all not getting paid.” That mentality stuck with me. I felt like, “You’re judging me, but I’m making more money than you.” I felt like nobody could shame me for being a stripper. When I started stripping, I was making probably $500 a night. As I got bigger, I was making $2,000, maybe $5,000. When I got really popular on Instagram I was making $7,000 to $10,000 a week. I felt on top of the world. I felt so untouchable and so sexy, because there were rappers that all these girls lust over who would come to the strip club and request me to go to their section. They would request me. If I’m so trash, why are these guys requesting me? I’m getting paid for my looks. Nobody’s going to spend money on you if you’re ugly.

CAREY: [Laughs] Judge not lest thou be judged, to quote the Bible. They shouldn’t be judging you unless they want to judge themselves. And that’s the truth.

You can read the full interview here.

After the interview was published online, Cardi took to Twitter to apologize to Mariah for cursing so much during their chat. She said MC made her feel so comfortable that she felt like she was kiki’n with a friend. Mariah caught wind of Cardi’s tweet and responded:

The Invasion of Privacy rapper was poppin’ off on Twitter about some drama she’s involved in. She didn’t specify what exactly she was talking about, but fans speculate she’s going off about her legal battle with vlogger, Tasha K.

”I can’t wait till sh*t is over so I can tell my part of the sh*t. Motherf*ckers really ran with the I sent Nikkas too touch b*tches sh*t for too long,” Cardi tweeted.

”NAH FR BECAUSE THEY BEEN LYING ON YOUR NAME FOR SO LONG CLEAR IT BAE,” a fan tweeted in response.

”Super clear it … with Receipts and all !,” Cardi said.

According to reports, Cardi filed a lawsuit against vlogger Tasha K in 2019, accusing her of posting over a dozen videos defaming her with the unfounded allegations. In response, Tasha K filed a $1 million lawsuit claiming Cardi B’s fans came at her with gang-related threats, which caused anxiety, stress, insomnia, and depression. Reportedly, Cardi B is asking for at least $75,000 in damages for slander, libel, invasion of privacy, and intentional infliction of emotional distress.

Cardi’s rapper husband Offset got on daddy duty and painted his and daughter Kulture‘s nails. Cute! 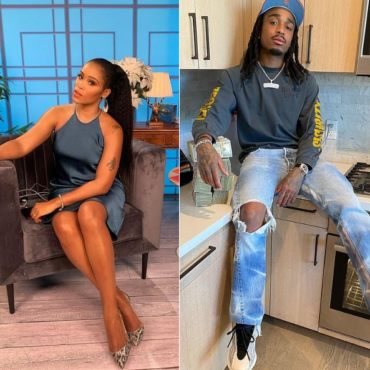 Eve is making a TV comeback as she just landed a leading role in an upcoming ABC series. Deets on her new show, plus how Migos rapper Quavo is gearing up to make a splash in Hollywood with some heavy hitters inside… From rapper, to actress, to TV, back to actress! Eve is making a TV comeback! We all remember her hit self-titled sitcom “Eve” from the early 2000s. Now, […]