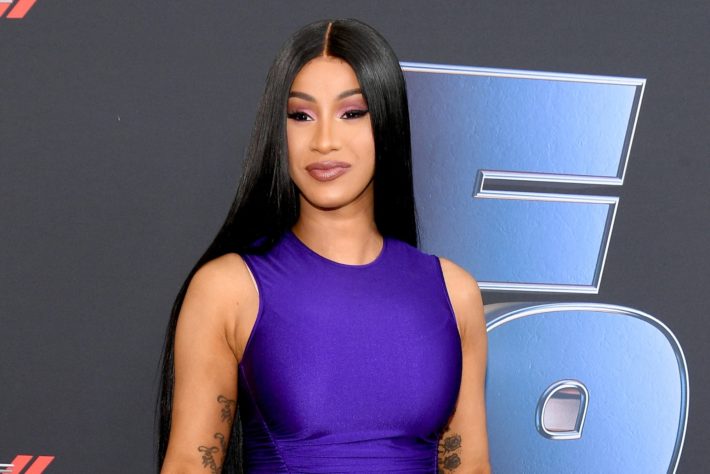 Cardi B tweeted that the idea of defunding the police is “bullsh–” Thursday, but deleted her post shortly thereafter.

“We need cops and that’s facts we just need strict laws for cops,” she wrote. “If you shot someone just like civilians you will go to jail that same day, get charge, wait for bond and go to trial. 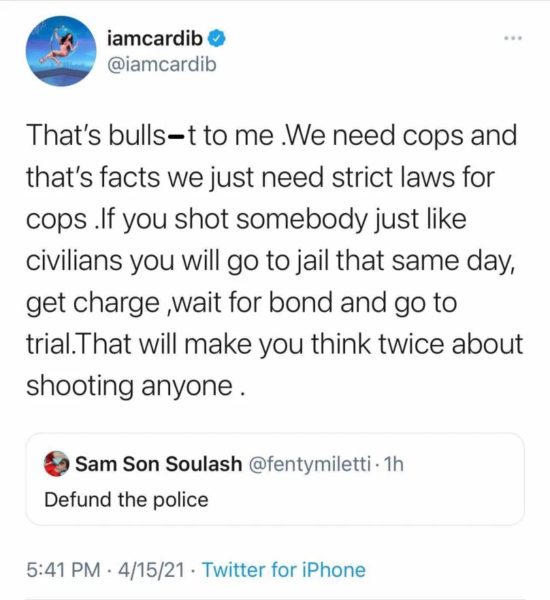 “That will make you think twice about shooting anyone.”

The 28-year-old Cardi B made the pro-law-and-order comment in response to a Twitter user who wrote “defund the police” under another one of her messages on the social media site.

In Cardi B’s original message, the “Bodak Yellow” rapper wrote: “I’m so tired of police brutality & entitlement. We are sooo tired of it. When will it end?”

Supporters of the “Defund the Police” movement soon pounced on Cardi’s “we need cops” comment — painting her decision to “back the blue” as ignorant of what the movement seeks to achieve.

“Cardi. Defund the police does NOT mean ABOLISH the police,” the user replied. “It means reallocating money from the police to local municipalities … Stop sending military weapons used in war to police.”

Cardi. Defund the police does NOT mean ABOLISH the police. It means reallocating all the money from the police to local municipalities. To social workers. Housing, education, employment, mental health care, and youth services. Stop sending military weapons used in war to police

Twitter user Clarkisha Kent tweeted “what the hell is this” over a screen shot of the rapper’s tweet and then wrote: “Y’all said ‘abolish’ was too harsh and the comprise [sic] was ‘defund’ so what up? Why are your gums still flapping.”

A few hours after posting the pro-cop tweet, Cardi took it down.

Some, however, agreed with the rapper’s sentiment.

“Love to see cardi b utilize common sense with respect to this issue. ‘defund and abolish’ is not a solution to corruption in law enforcement,” tweeted one follower.

The day prior, Cardi posted a video calling out “blue check Republicans” on social media for ignoring police brutality while “ranting about celebrities.”

“We have seen a young man get killed by a cop, unarmed, and the excuse was the cop that had been on duty for 20-plus years, mistaked a gun for a taser,” she said. “And my thing is, where the f–k are you Twitter blue check Republicans at?

“Y’all are the loudest on this motherf–king app,” she continued, “y’all not saying nothing, y’all not complaining, y’all blame everything with what’s wrong in America beside the police. Y’all have been very silent! What’s going on?”

A rep for Cardi B did not immediately return our request for comment.

Cardi took to Twitter today to condemned the fatal shooting of a 13-year-old by a Chicago police officer, describing the situation as truly traumatizing.’ Cardi also cleared up her argument about defund the police.

That video of that 13 year old falling on his ass after getting shot by a cop is so sick,sad and disgusting.I’m so tired of police brutality & entitlement.We are sooo tired of it .When will it end? like this shit is becoming too much. It’s truly traumatizing. 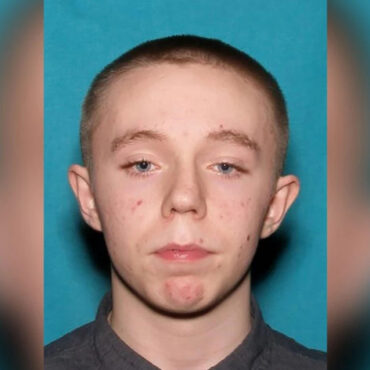 Authorities released a photo of the 19-year-old former FedEx worker who shot up his workplace in Indianapolis before turning the gun on himself. via NYP: Authorities have identified the shooter as Brandon Scott Hole a local man who last worked for FedEx in 2020 and had previous run-ins with police during a suicidal episode.  Cops still don’t know why Hole used a rifle to kill eight people and wound five others […]