Candace Owens Sends For Cardi B Then Threatens Legal Action When She Claps Back, Rah Ali Enters The Chat 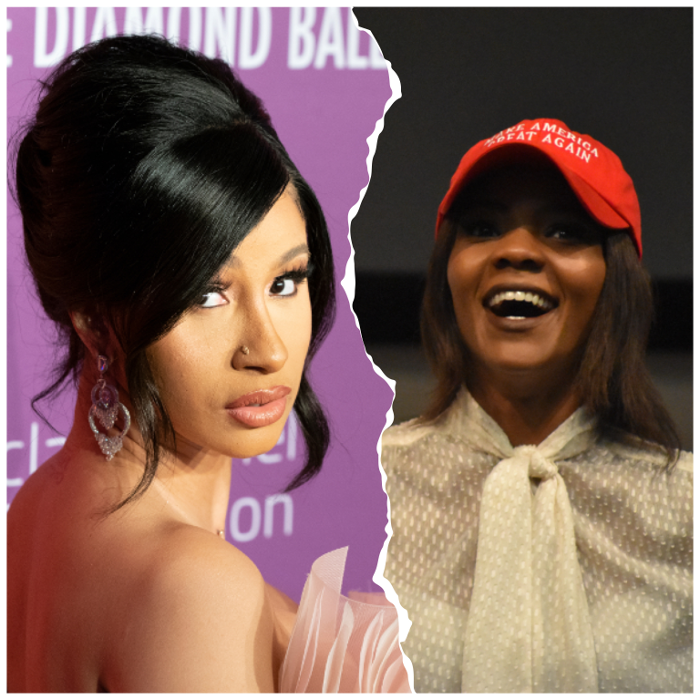 Don’t come for Cardi B unless she SENDS for you. And she didn’t send for Candace Owens, yet, Bardi has been living rent free in her head. Soon as the NYC rapper claps back, Candace wants to play victim. More about their epic Twitter feud inside…

Like granny used to say: Stay out of the kitchen if you can’t take the heat!

Rapper Cardi B and proud conservative/MAGA supporter Candace Owens got into another epic Twitter recently. And now, Candace is playing victim.

Fresh off her Grammy performance of “WAP” alongside Megan Thee Stallion, Cardi B is clearing folks on social media who have been BASHING their racy performance.

Candace appeared on FOX News to bash Bardi’s “WAP” performance. If you haven’t heard, conservatives have been critiquing the Grammy performance something HEAVY, comparing it to the ban on Dr. Seuss books. We know, apples and horses. However, they’re still going hard on the criticism.

Here’s what Candace had to say:

Candace Owens says WAP being performed at the Grammy’s signifies the “corrosion” and “end of an empire” pic.twitter.com/G1BpwUdTTH

“I think parents should be terrified that this is the direction that our society is heading towards,” Candace told Fox News host Tucker Carlson. “Again, we are weakening America… We are setting the stage, and it feels like we are looking at corrosion like we are about to see the end of an empire.”

She added, “Matter fact I’m just going to thank Candy. She put my performance on Fox News giving it more views that boosted the views on YouTube and is counting towards my streams and sales ? STREAM UP AND WAP .REMEMBER GROWN PARENTS ONLY YOU CAN MONITOR WHAT YOUR KIDS WATCH NO1 ELSE.”

And where’s the lie?

Peep more of their tweets below:

In more since-deleted tweets, the “UP” raptress said her “WAP” performance was influenced by former First Lady Melania Trump. Peep Cardi’s tweets below (via Rolling Stone):

“Anyways congrats on your new show I hope you speak more about ‘WAP’ I need it to reach a new Audience to go 6x platinum. Any exposure will help. Love you candy.” The tweet spawned several heated exchanges between Cardi and Owens that continued on Tuesday.”

”I’m obsessed she’s my idol. She showed me I can be naked perform wap and still be a First Lady one day ! ….wait so only White women can be naked and show their sexuality and evolve in their 30s but I can’t ? Wow America is soo unfair .To think this was the land of the free.”

”And black women should be more like you? After all the fighting for equality and freedom they should be submissive to a white a man after years of abuse & rape making them a sandwich while pregnant cause in your words “ that’s what a woman should do”? Interesting”

”It’s not a sin but claiming “That’s what a woman supposed to do set us women Black or white to hundreds of years back. You have your own show and voice because women fought for years for us to be free to do what we please NOT to be in a kitchen being submissive to a man.”

”And as a black woman you should know better then that .You know Deum well America made caricature of black women only being good in the kitchen and taking care of children also known as the “mammy”

Then, Cardi shared some tweets that were allegedly photoshopped, claiming Candace admitted her husband had sex with her brother.

Yes. Just spoke with my family. I am 100% suing Cardi for that nonsense. You can’t just start throwing out wild lies against private members of my family because you’re upset someone called your out on your degenerate performance.
I‘ll keep you all posted. https://t.co/v2aisvQiOG

”Yes. Just spoke with my family,” Candace tweeted. “I am 100% suing Cardi for that nonsense. You can’t just start throwing out wild lies against private members of my family because you’re upset someone called your out on your degenerate performance. I‘ll keep you all posted.”

Bardi popped back in a tweet (that she deleted):

”I’m going to sue candy for claiming I photoshopped a tweet that dozens of articles reported about back in November 2016z.First she claim me and my team photoshopped it now it was a fake tweet. Which one is it .Everyone is free to Google.”

The feud continued into today:

Gee. I wonder what made @iamcardib delete the photoshopped tweets regarding my husband and brother.
Too late, degenerate.
You mess with my family, I won’t stop until I’m the CEO and chairman of that WAP https://t.co/zMFjKTqW9A

You did not delete all of the tweets pertaining to me— you specifically deleted the ones in which you LIED about my family claiming you personally saw the tweet written from me on twitter while I was trending.

Imagine being dumb enough to think any person is falling for this. https://t.co/PURrmKLOQ0

Guys I will be a little busy till later on the day .If any troll is bothering or tweeting about me just reply back with a video clip of “UP” .Have a nice day !! Talk to yall later .

Candace, mind the business that pays you.

The Invasion of Privacy rapper wasn’t letting anything slide yesterday as she also got into a social media feud with former “Love & Hip Hop” star/Nicki Minaj’s friend Rah Ali.

The blogging site Rah Ali says she is associated with posted an audio of a young girl who rapped a diss track aimed at Cardi and that apparently pissed the “Be Careful” rapper off, so she responded.

It started when Rah hopped on Twitter to clarify some things:

Good Morning! I woke up to messages from last night of GOTC implying that @Its_Onsite is behind the page of the alleged editor. Just for the record I stand loud and proud on anything I’ve said about that bitch. I would never make a fake page to do so.

That comment isn’t posted on @Its_Onsite because my editors couldn’t verify the woman’s identity. Fee posted it then called herself the goat after realizing she didn’t fact check. All of this is a distraction from the real issue at hand, which is…

PURGE IS A CLOWN AND A PATHOLOGICAL LIAR. Tell ya mama, Tell a friend!

Be safe on this Good Friday and remember to follow @Its_Onsite pic.twitter.com/pvYQ643ZSF

”You gaslight me as if I have a problem with you posting me. You post me every week and I’ve said nothing. You constantly harass me and another woman, but to get my attention you took it as far as to post someone who dissed my child in a rap,” Cardi tweeted.

The person who wrote the diss track mentioned Cardi’s daughter, Kulture, and she definitely wasn’t feeling that, so she responded: 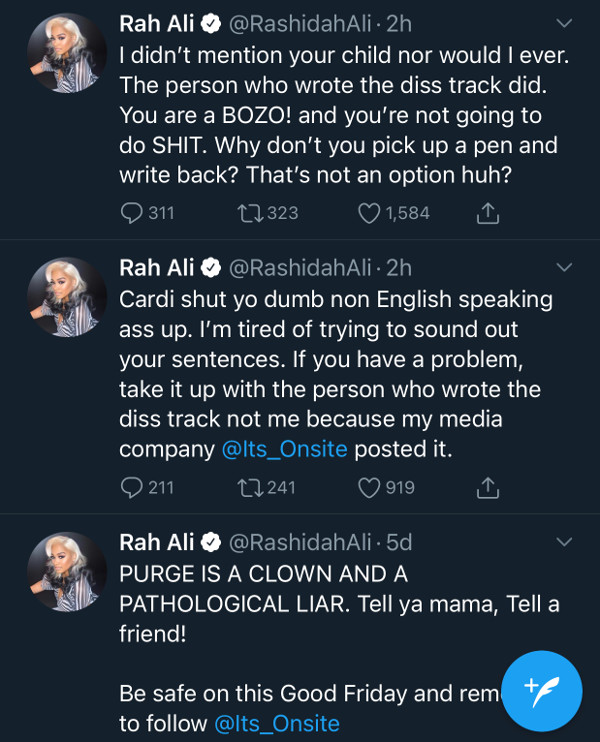 Then, Rah Ali popped back:

Bardi isn’t sweating though. She heard what y’all said about her looking a little “fluffy” during her Grammy performance, so she shared a “skinny minny” flick: 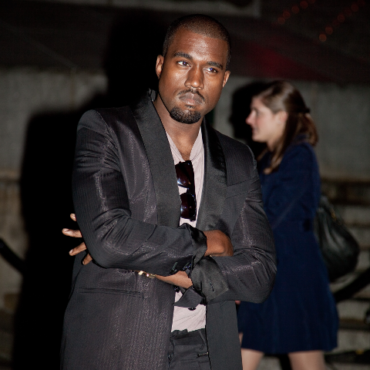 Kanye West Is Reportedly Worth $6.6 Billion, Making Him The Wealthiest Black Man In America, Supposedly

Kanye West is worth a cool $6.6 billion, according to a new Bloomberg report. And the news comes on the heels of Beyonce’s historic Grammy night. More inside… It appears the deals Kanye West has been making over the last few years have pushed him well over billionaire status. According to a new Bloomberg report, Kanye West’s net worth has catapulted to a whopping $6.6 billion, making him the richest […]