“Bachelorette” alum Rachel Lindsay is back on social media after she deactivated her account amid backlash she received over a controversial interview with “Bachelor” host Chris Harrison. Deets on what went down and everything that’s happening now inside…

If you haven’t heard, the 35-year-old attorney – the first Black lead of The Bachelor franchise – deactivated her account after receiving tons of backlash due to a controversial interview with “Bachelor” host Chris Harrison. More on that in a second.

Rachel resurfaced on social media sharing a post of a bouquet of sunflowers with an inspirational caption. “I want to be like a sunflower so that even on the darkest days I will stand tall and find the sunlight,” she captioned.

Well, last month “Bachelor” host Chris Harrison joined Rachel for an interview with “EXTRA” to dish on “Bachelor” Season 25 contestant Rachael Kirkconnell and her racially insensitive past. She came under fire after photos of her attending a 2018 Old-South Antebellum-themed party surfaced online.

And Chris defended her:

“First and foremost, I don’t know,” he said. “I haven’t talked to Rachael about it. And this is, again, where we all need to have a little grace, a little understanding, a little compassion. Because I’ve seen some stuff online—again this judge-jury-executioner thing—where people are just tearing this girl’s life apart and diving into, like, her parents and her parents’ voting record. It’s unbelievably alarming to watch this. I haven’t heard Rachael speak on this yet. And until I actually hear this woman have a chance to speak, who am I to say any of this?”

”You’re not going to please everybody,” he said. “I am not the woke police.”

After Chris went viral and made headlines, he then decided to issue an apology on social media, sharing on Instagram in part, “To my Bachelor Nation family — I will always own a mistake when I make one, so I am here to extend a sincere apology. I have this incredible platform to speak about love, and yesterday I took a stance on topics which I should have been better informed.”

On her podcast “Higher Learning with Rachel Lindsay and Van Lathan,” she said she was “hurt” by Chris’ comments and noted how he didn’t issue a public apology until he started receiving backlash.

Days later, he apologized again, announced he was stepping away from the “Bachelor,” and apologized to the Black community:

“I set standards for myself, and have to meet them. I feel that with every fiber of my being. Now just as I taught my children to stand up, and to own their actions, I will do the same. By excusing historical racism, I defended it. I invoked the term ‘woke police,’ which is unacceptable. I am ashamed over how uninformed I was. I was so wrong,” he wrote.

After Chris announced he was stepping away from the “Bachelor,” Rachel began being harassed by “Bachelor” trolls who blamed HER for his break from the show, so she deleted her Instagram account.

”Y’all gotta get a f*cking life. Rachel is not responsible for Chris Harrison. A 49-year-old man who can’t read the room in these present 2021 times,” he said. Peep the full video above.

Amid the backlash, Chris went on “Good Morning America” a few days ago to issue yet another apology and changed up his thoughts about white people attending Old-South Antebellum-themed parties:

“Antebellum parties are not OK,” he said. “Past, present, future, knowing what that represents is unacceptable.”

The TV host offered up another lame apology to Rachel and the Black community for his comments.

“I made a mistake and I own that,” he said. “Racism, oppression, these are big dynamic problems and they take serious work. I am committed to that work.”

The TV host also said he has plans to return to the hit dating show.

“I plan to be back and I want to be back,” he said. “This interview is not the finish line, there is much more work to be done and I am excited to be a part of that change.”

Chris Harrison said he was working with “race educator” Dr. Eric Dyson (chile…) so he can learn from the black community by listening. “Good Morning America” co-anchor Michael Strahan wasn’t buying it.

After the taped interview ended, Michael Strahan commented on the segment, saying, “His apology is his apology, but it felt like I got nothing more than a surface response on any of this, and obviously he’s a man who wants to clearly stay on the show, but only time will tell if there’s any meaning behind his words.”

Former NFL player turned sportscaster Emmanual Acho is set to replace Chris for the “After The Final Rose” show. 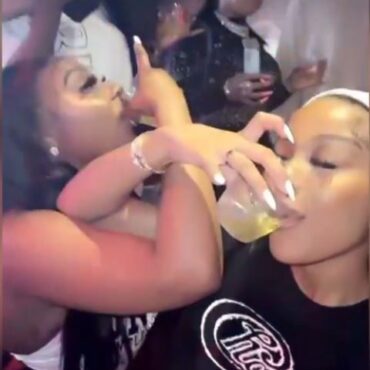 The city of Atlanta is PACKED with people for NBA All-Star despite Mayor Keisha Lance Bottoms’ request for fans to stay at home. Go inside the packed clubs, plus deets on an up-and-coming Houston rapper fatally shot in Atlanta inside… Before the 2021 NBA All-Star Weekend kicked off, Atlanta Mayor Keisha Lance Bottoms made a plea, asking that people NOT travel to the city for the All-Star Weekend festivities. Under […]