Bruno Mars released a new song and the conversation of whether or not he’s guilty of cultural appropriation has been reignited.

“People love to accuse you of being a cultural thief, which I find interesting because you are a person of color,” host Charlamagne the God said to Bruno (21:50). “What would you say to those people?”

Bruno explained that he has always given credit to the funk, R&B, and pop artists who came before him and insisted there was nothing but love behind his material.

He went on to say that he wears his inspiration on his sleeve and hopes future artists will also take cues from his work.

“What is the point if us, as musicians, can’t learn from the guys that’ve come before us? What did they do?” he said, before Charlamagne asked if the criticism made him upset. “… It comes with the gig. And there’s real merit to what people are saying about Black entertainers not getting their flowers, and I’m championing with that, I’m with that … I understand, but it’s just Twitter.”

Watch the interview below. 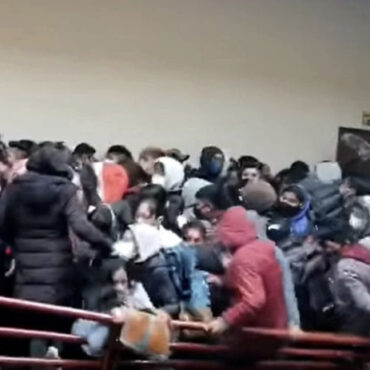 A shocking moment captured on video — seven college students fell to their death and four others were injured in Bolivia when a railing collapsed, sending them falling from a fourth-floor balcony. via NYP: Wild video of Tuesday’s incident showed a mass of students from the Public University of El Alto packed onto the balcony before the railing gave way. The tragedy happened in the university’s financial sciences building, as […]