It’s clear ”Bridgerton” fans will follow and support breakout star Regé-Jean Page with whatever he’s doing just to get another glimpse of his handsome face.

After Netflix solidified the time-period drama’s success as the network’s biggest series ever, everyone’s favorite crush capitalized on the moment as host of “Saturday Night Live” over the weekend.

Needless to say, the thirst was very real:

not me waking up at 7 am just to watch snl with regé-jean page THE THIRST IS REAL pic.twitter.com/0d5MJyvdAm

“People associate me with being this smoldering, sensual smokeshow,” he said in his monologue. “But I assure you, I’m just a regular guy.”

Yeah, sure. He could barely get a full sentence out since fans were screaming out for him in the audience.

With the success of the show, it’s no surprise a “Bridgerton” spoof made the list of sketches. The British-Zimbabwean actor portrayed his character Duke Simon Hastings alongside “SNL” star Chloe Fineman, who played Daphne Bridgerton. The spoof couple were attempting to act out a love scene, but they had to meet with two “intimacy coordinators” first:

Check out a few of his other skits below:

Bad Bunny was tapped as the musical guest:

Fans were anxious to see Rege because ratings for the long-running comedy show went up. According to NBC, the show increased its ratings from last week, climbing from a 4.1 household rating when Regina King hosted on Feb. 13 to a 4.2 household live and same-day rating with Page. That means that 4.2% of households with a TV watched the program in the 44 metered local markets measured by Nielsen. The show also posted a 2.0 household rating in the age 18-49 demographic in the 25 markets with local people meters.

NBC also said that for the first time in its 46-season history, “SNL” was ranked No. 1 among all comedies this week on both broadcast and cable in the adults 18-49 demographic and total viewers so far.

Shutting down rumors that he’s dating his co-star Chloe, Rege was spotted all hugged up in London recently with a woman named Emily Brown, who is part-time soccer player in the United Kingdom as well as a part-time freelance copywriter. Peep their coupledom shots HERE. 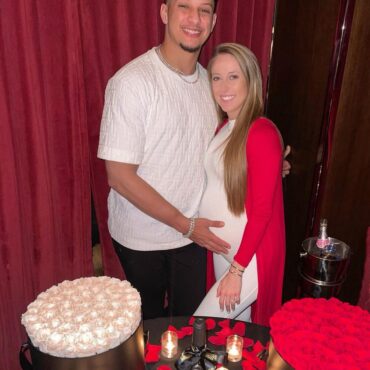 Kansas City Chiefs QB Patrick Mahomes may not have a Super Bowl trophy to make him smile these days, but he's got another trophy he's head over heels for - a new baby girl!  The first pic of the NFL star and fiancee's daughter plus their maternity photos that had folks talking.   It's a girl for Patrick Mahomes and Brittany Matthews! After a tough NFL season dealing with Covid […]