Netflix has given “Bridgerton” the greenlight for Seasons 3 & 4 as production for Season 2 is underway. Also, deets about Season 1 breakout star Regé-Jean Page turning down a few bags to appear in Season 2 inside…

Dearest readers! Your favorite Netflix series was just given the greenlight for two additional seasons!

Netflix has renewed its biggest series, “Bridgerton,” for seasons 3 and 4 as production for Season 2 is underway. The upcoming season will follow a new love story of Lord Anthony Bridgerton’s quest for love.

”Esteemed members of the Ton, It seems we have a rather special announcement. Bridgerton shall return for seasons three and four. This author shall have to purchase more ink…”

“Bridgerton swept us off our feet. The creative team, led by Shonda, knew the material and delivered a beautiful, emotional, romantic drama for our members. They have some exciting plans for the future, and we think audiences will continue to swoon for this show. We’re planning to be in the Bridgerton business for a long time to come,” said Bela Bajaria, VP, Global TV at Netflix.

“From the first time I read Julia Quinn’s delicious Bridgerton series, I knew these were stories that would captivate a viewing audience. But the evolution of this adaptation would not be a success without the many significant contributions of the entire Shondaland team. This two-season pickup is a strong vote of confidence in our work and I feel incredibly grateful to have partners as collaborative and creative as Netflix. Betsy and I are thrilled to have the opportunity to continue bringing the world of Bridgerton to a worldwide audience,” Shonda Rhimes added.

The Regency-era drama’s renewal news comes on the heels of Season 1 breakout Regé-Jean Page confirming he would NOT be returning for Season 2, which falls in line with the Duke of Hastings’ absence from Julia Quinn’s second novel in which the series is based on. Season 2 will follow Anthony Bridgerton’s quest for a bride.

Fans were hoping they would get a came or two of Regé-Jean Page in Season 2, but it’s not happening. Turns out, the 31-year-old British actor turned down an offer to star in the second season.

Sources told The Hollywood Reporter, Regé didn’t leave because he wasn’t wanted. In January or February, “Bridgerton” producers reached out to Regé’s team with an offer to guest star in Season 2. The production team offered him to guest star on three to five episodes of the show’s sophomore season. Had he accepted, he would have been paid $50,000 per episode.

Well, he turned down the bag. He declined on the offer for a “multitude of reasons,” which likely has to do with his busy filming schedule. His career has taken off since his appearance in Season 1 of “Bridgerton” and he has a few projects already lined up, including Netflix ‘s The Gray Man – starring opposite Ryan Gosling & Chris Evans – and Paramount’s Dungeons & Dragons, where he’s joining Chris Pine, Justice Smith and Michelle Rodriguez. It appears scheduling conflicts got in the way of future “Bridgerton” cameos.

The British hottie previously explained to Variety why he will not be returning to the popular Netflix series:

“It’s a one-season arc. It’s going to have a beginning, middle, end – give us a year,” he shared about how Shondaland producers pitched the role to him.

“[I thought] ‘That’s interesting,’ because then it felt like a limited series. I get to come in, I get to contribute my bit and then the Bridgerton family rolls on.”

Phoebe Dynevor – Regé’s on-screen wife – will reprise her role as Daphne Bridgerton on Season two as a “devoted wife and sister, helping her brother navigate the upcoming social season and what it has to offer.”

Regé-Jean Page said he fulfilled his duties as the Duke of Hastings and he’s ready to move on to bigger and better things. Not mad.

Will be be tuning in for Seasons 2, 3 & 4 now knowing fan favorite Regé-Jean Page will not be returning? 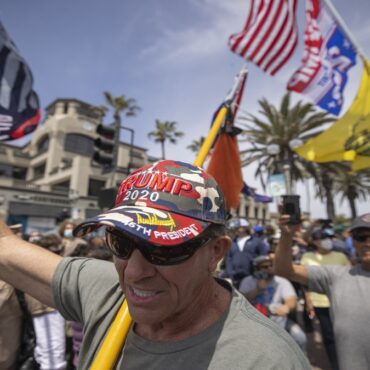 ‘White Lives Matter’ Rallies Flop As Hardly Anyone Shows Up

The rally held in Huntington Beach, California, became outnumbered by counter-protesters and was deemed unlawful assembly. What We Know: The far-right white supremacist rally was shut down by police less than two hours after it began on Sunday. The event was scheduled for one p.m, but counter-protesters had arrived two hours earlier. The counter-protests intended to ensure that the ‘White Lives Matter’ protesters didn’t feel welcome. A part of the […]